Merger and acquisition activity in the label and flexible packaging printing and converting segments have been on fire, with several PE-backed roll-ups competing to pick up family-owned and managed companies. As the market becomes more crowded with competing PE platforms, several roll-ups were inevitably themselves rolled up in secondary and tertiary buys (see Private Equity Fuel$ Consolidation of Label Industry – September 2021).

The activity in the label and flexible packaging segments continues unabated, month after month, and March was no exception. All American Label & Packaging, with backing from Heartwood Partners, merged with Western Shield Label & Packaging, itself a serial acquirer of label companies. C-P Flexible Packaging, with financial sponsorship of First Atlantic Capital, acquired Bass Flexible Packaging. The Jordan Company, a PE firm with deep experience in packaging films and paperboard mills, acquired Five Star Holding, a Texas-based group of companies that produce flexible packaging, printed films, and plastic bags. H.I.G. Capital, the global behemoth fund and no stranger to print-centric businesses, has rebranded its new flexible packaging platform simultaneously with the purchase of TechFlex Packaging in Gardena, California. Operating now as DazPak, the new entity incorporates the former acquisitions of Action Packaging and Signature Flexible Packaging, and certainly is in the hunt for more.

As we noted in our September annual review of M&A activity in the printing, packaging and graphic communications industries, our expectation has been that the super-heated acquisition activity in the label and flexible packaging businesses would likely be mimicked by an increased rate of consolidation within the folding carton manufacturing segment. Activity will be most pronounced in the lower middle market that is populated by mature privately owned businesses. While the folding carton business may never experience the frenzy of activity occurring in the label business, nonetheless increased consolidation in folding cartons is now underway and, in our opinion, is likely to increase.

Private Equity is the Driver

As with labels, the fuel igniting the fire in folding cartons is the institutional capital injected into the market by the multitude of private equity funds seeking to differentiate themselves and put their investor’s money to good use within limited time frames. Packaging, in general, has several of the characteristics that many funds seek: recurring revenues, reasonably predictable margins, diverse customer verticals, and a highly fragmented landscape of companies to acquire, many of which are privately owned and operating in the fertile ground of the lower middle market.

With low interest rates and plenty of cash sloshing around the economy, old-fashioned financial engineering has been replaced by the platform-and-bolt-on strategy. Buy a good sturdy company, add on an appropriate acquisition, remove duplicative costs, institutionalize the back-office functions, and repeat. Funds seeking a coherent investment thesis have landed on packaging as a desirable and suitable business to which they can apply this basic roll-up strategy.

As in other segments of the printing industry, aging owners of folding carton manufacturers often do not have a qualified or interested next generation to pick up the mantle of leadership or that want to assume the financial risk inherent in private company ownership. Faced with the need to embark on another cycle of investment in increasingly sophisticated capital equipment, owners instead want to exit ownership, take chips off the table, and retire from the business. Fertile ground for consolidation, indeed.

Lewisburg Printing Company announced that it was merging Huston Patterson into its fold, along with Sigma Graphics, a subsidiary of Huston Patterson. The acquired company operates from its primary location in Decatur, Illinois, with an additional plant in Ottawa, Illinois. The acquired company perfectly fits the roll-up bolt-on criteria. With a history dating back 115 years, Huston Patterson began as the commercial printing division of the local newspaper publisher. Acquired by the current selling family in 1961 as a small letterpress printing company, three generations have managed the transition of Huston Patterson into a producer of packaging and retail display components.

Products produced at Huston Patterson include litho labels and top sheets for mounting on corrugated stock to produce boxes with high quality graphics. Differentiation is provided with a fleet of large format offset presses capable of printing sheets large enough to wrap a box. Similar to other printing companies that run large format offset presses, Huston Patterson also produces top sheets used to manufacture retail displays. With 80 employees, the acquired company is in the sweet spot for bolt-ons in a roll-up strategy, not large enough to be purchased as a new platform company, but big enough to make an attractive addition to an existing PE-backed company ready to commence its roll-up strategy.

Lewisburg Printing itself was acquired in April 2021 by Radial Equity Partners, a New York-based private equity firm. The Radial Equity Partners team members are no strangers to the packaging business, having worked together at predecessor private equity firms leading investments in Alpha Packaging, Chesapeake Corporation, Mold-Rite Plastics and Multi Packaging Solutions. Lewisburg Printing has 250 employees operating large format offset presses and locations in Tennessee and Texas, and as such, is the ideal platform company on which to build out another success story.

Oliver Printing & Packaging has a significant head start in this current class of PE-backed folding carton roll-ups. The Oliver family sold a controlling interest to Pfingsten Partners in May 2016. With its roots in commercial printing, Oliver had methodically built an expertise in printing and finishing folding cartons. Using Oliver as its platform, Pfingsten set about building out the platform in 2017 with the acquisition of folding carton manufacturer Pohlig Packaging in Richmond Virginia, followed by the purchase of DISC Graphics located on Long Island in New York State. DISC started as a specialized printing company producing record jackets and marketing collateral for the entertainment industry and had evolved into a high-end folding carton manufacturer serving a wide range of industries.

Another sophomore in the PE-backed roll-up of the folding carton segment is GPA Global. With backing from Sweden-based private equity firm EQT Partners, GPA has taken a more international approach, acquiring folding carton plants in the UK, Ireland, Poland, and the US. Most recently, GPA uncharacteristically staked out a position in the commercial printing segment with the purchase of Southern California Graphics (see GPA Global Emerges as Packaging Consolidator – December 2021).

On the varsity level is Rohrer Corporation, having graduated from its first PE sponsorship as a portfolio company of Shoreview Industries when it was acquired by Wellspring Capital in 2021. Upon its exit from ownership of Rohrer, Shoreview announced that it had grown Rohrer from $67 million to over $200 million in revenue with four add-on acquisitions since its initial investment in the company in 2009. Leaving no doubt about its intention to owners and potential sellers of folding carton companies, Wellspring announced its goal to “become the consolidator of choice in the industry.” Making good on that promise, Wellspring has already supported the acquisition of Jay Packaging in Warwick, Rhode Island and Coburn Carton Solutions in Hayesville, Ohio.

Fueled by the public markets rather than private equity funds, Graphic Packaging and Westrock are large, vertically integrated producers of folding cartons. Both companies operate their own paperboard mills with much of their mill’s output consumed by their own operations. While not completely immune to being purchased by one of the massive global private equity funds in a take-private transaction, these public entities have been at the top end of the folding carton food chain, absorbing former PE-backed roll-ups that have reached sufficient critical mass.

If the activity of the past several years in the label printing segment is any indication, and to at least some extent we believe it is, owners of folding carton manufacturers in the lower middle end of the market will be on the receiving end of multiple calls from newly minted young MBAs working the phones and sending emails, seeking to introduce their employer, a private equity fund intent on rolling up another segment of our industry. 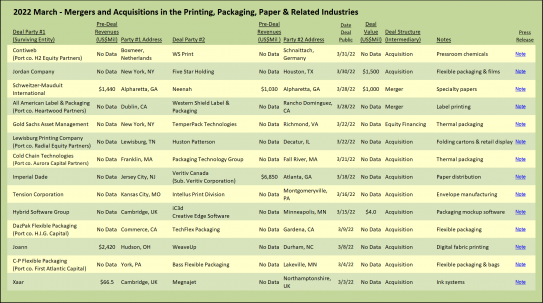 M&A Directions: Some Light After a Long Shadow