WASHINGTON — August 10, 2016 — Excluding a change in accounting estimate recorded during the quarter, the U.S. Postal Service reported operating revenue of $16.6 billion for the third quarter of fiscal year 2016 (April 1, 2016 - June 30, 2016), an increase of $117 million, or 0.7 percent, over the same period last year (See Selected Third Quarter 2016 Results of Operations table below). Nevertheless, the Postal Service suffered both a controllable loss (defined below) and a net loss for the quarter. In addition, the Postal Service’s revenues were approximately $450 million less than they otherwise would have been during the quarter because of the expiration of the exigent surcharge on April 10, 2016.

The Shipping and Packages business continued its strong performance with revenue growth of $645 million, or 18 percent. This was offset by a decline in First-Class Mail revenue of $379 million, or 5.5 percent, due largely to the expiration of the exigent surcharge. The expiration of the surcharge will reduce revenue by an additional amount of approximately $500 million for the fourth quarter and by almost $2 billion annually.

"We continue to post double-digit gains in package volume and are well-positioned operationally for further growth. Our capital investments are enabling increased efficiencies across the enterprise and improving experiences for our customers," says Postmaster General and CEO Megan Brennan. "Despite the encouraging numbers, net losses continue to mount. Our results in the quarter further underscore the need for legislative reform that provides the organization with greater financial stability."

The controllable loss for the quarter was $552 million compared to a controllable loss of $197 million for the same period last year. Calculation of controllable loss takes into account the impact of operational expenses including compensation and benefits; but does not reflect factors such as the legally-mandated expense to prefund retiree health benefits or the change in accounting estimate noted above (see Controllable Income (Loss) below for a full description).

The net loss for the quarter was $1.6 billion, an increase of $981 million compared to the same period last year. The increase was most significantly impacted by a $1.6 billion unfavorable change in workers' compensation expense as a result of interest rate changes, offset by the $1.1 billion change in accounting estimate.

"Although the Postal Service achieved strong results in package delivery and Standard Mail volumes, only a slight increase in total revenue was recorded due to a mandated price reduction earlier this year," notes Joseph Corbett, CFO and executive VP Joseph Corbett. "We incurred a net loss resulting, in part, from continued decreases in First-Class Mail volume and systemic financial imbalances associated with our retiree health benefit prefunding requirements." 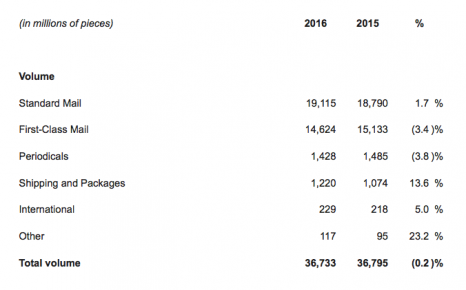 Selected Third Quarter 2016 Results of Operations and Change in Accounting Estimate
During the three months ended June 30, 2016, the Postal Service revised the estimation technique utilized to determine its Deferred revenue-prepaid postage liability for a series of postage stamps. The change resulted from new information regarding customers’ retention and usage habits of Forever Stamps, and enabled the Postal Service to update its estimate of usage and “breakage” (representing stamps that will never be used for mailing due to loss, damage or stamp collection).

As a result of this change in estimate, the Postal Service recorded a decrease in its Deferred revenue-prepaid postage liability as of June 30, 2016, which caused an increase in revenue and decrease in net loss of $1.1 billion for the three months ended June 30, 2016. This change in accounting estimate resulted in a non-cash adjustment that does not impact the Postal Service's available cash or access to cash and does not affect its controllable loss. 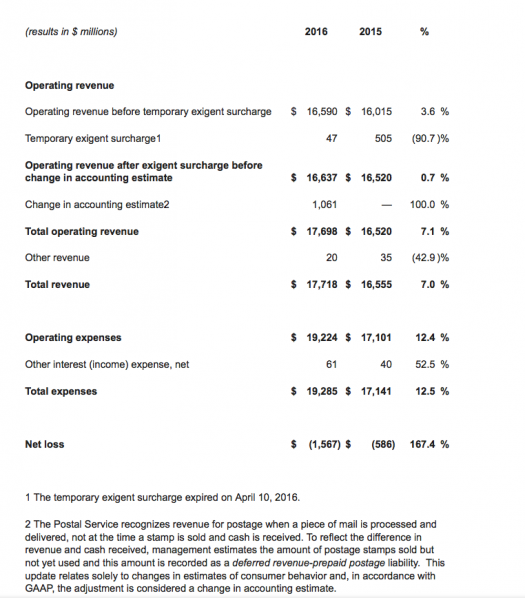 Controllable Income (Loss)
This news release references a controllable loss, which is not calculated and presented in accordance with GAAP. Controllable income (loss) is a non-GAAP financial measure defined as net income (loss) adjusted for items outside of management’s control and non-recurring items. These adjustments include the mandated prefunding of retirement health benefits, actuarial revaluation of retirement liabilities, non-cash workers’ compensation adjustments and the change in accounting estimate.

The following reconciles GAAP net loss to controllable loss and illustrates the loss from ongoing business activities without the impact of non-controllable and non-recurring items for the three months ended June 30, 2016 and 2015: 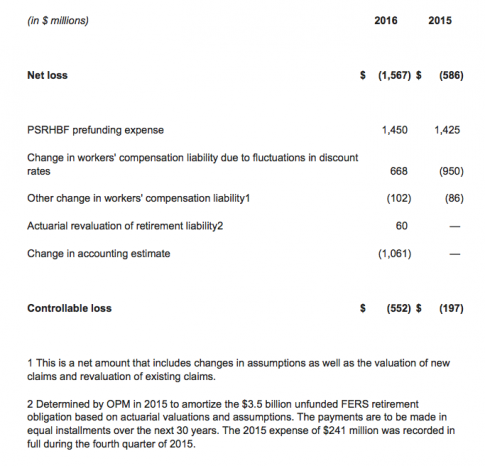