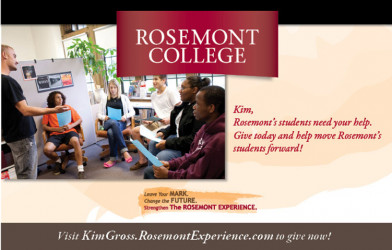 This mailer, which is part of an alumni fundraising campaign at Rosemont College, drives recipients to a personalized URL.

Background: Rosemont College is a private, Catholic liberal arts college. This suburban Philadelphia school was founded in 1921 and has an enrollment of approximately 900 students.
Campaign Objectives: The college sought to increase its Annual Fund participation and total dollars raised for its latest fiscal year. The school was confronted with a considerable challenge — a capital fundraising campaign was being run at Rosemont simultaneously. That limited the number of prospects Rosemont could reach out to, as many longstanding donors had pledged to the capital fund.

In order to realize its goals of increasing donations to the Annual Fund, Rosemont had to bring in new donors and increase the gift size from past donors.

Structure and Components: Allentown, Pennsylvania-based Pacesetter Enterprises devised a yearlong campaign with five phases that included four variable direct mail pieces and 12 variable emails with PURLs sent throughout the campaign. These PURLs pointed respondents to different areas of Rosemont College’s website that was pertinent to them. Respondent activity was tracked and used to develop subsequent messages. A variable template was created to ease the process of managing copy and link changes for the personalized microsite.

Donation reply cards were customized with variable pledge amounts directly related to their last gift amount or graduation year for those who were non-donors. Since donors historically pick the middle ask amount — as to not look cheap or give too much — the reply card used the last gift amount as the first check box. That led donors to pick the next box, which ensured an increase in gift size. The data used to determine variable copy was graduation year, donor status, past gift amount and college relation.

The first phase saw direct mail and emails sent that directed recipients to a video embedded into personalized landing pages, which featured footage from Rosemont’s convocation. Respondents were asked why they keep Rosemont a part of their giving plan; non-donors were asked what criteria they use when deciding where to make charitable donations. The goal of this phase was to gather decision-making information for their solicitation base.

Phases two through four focused on how each recipient was related to the college (undergraduate, graduate, parent/friend, campaign prospect). Variable copy, signatures and images were used based on the criteria. Each direct mail and email piece focused on the Rosemont experience that each recipient had and how the Annual Fund played a role in helping to make it a reality.

During the holiday season, a giving back campaign was launched. It included a versioned appeal focused on how Rosemont students give back to the community, as well as a video email that showcased the school through the holiday season.

The final phase ended with a 60-Day Challenge that inspired past donors and non-donors to renew their gift by June 30. A Challenge brand was created that was used on all variable direct mail and emails.

Results: Rosemont College increased total giving to the Annual Fund by 25 percent and saw an almost 1,700 percent return on investment. Nearly 88 percent of donors either maintained or increased their gift size from the previous year. Online giving shot up by 165 percent over the previous year. This also benefits the college, as online donations require significantly less staff time to process.