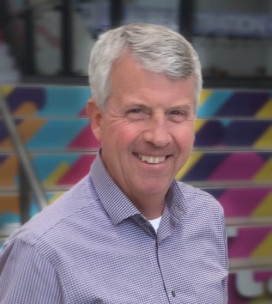 I was very saddened to hear of the Feb. 27 passing of Thomas "Tom" Metzger, 61, who, together with his brother Joe Metzger, built Toledo, Ohio-based Metzgers into a successful commercial printing and fulfillment business that always remained on the cutting edge of technology and industry advancement. Tom was preceded in death by his father, Norbert Metzger, his mother, Patt Metzger, and his brothers, Dick Metzger and Joe Metzger.

With his father Norb and his brother Dick, Tom Metzger co-founded Type House in 1976. His brother, Joe Metzger, joined the fold soon after, helping the family business ride the desktop publishing wave to transition what started out as a typesetting house into a desktop service bureau — then a color copy center and color separation business — before morphing into a full-fledged conventional and digital commercial printing, direct mail, wide-format, and mailing and fulfillment operation. With the addition of their sister Connie — who continues to manage Metzgers' fulfillment operation — the company evolved into the current-day iteration of Metzgers, which employs more than 100 people within an approximately 120,000-sq.-ft. facility.

As co-leaders of Metzgers, Tom and Joe Metzger were an exceptional duo: "two sides of the same coin," as aptly described in Tom's obituary. The very outgoing Joe headed up the sales and business development side of Metzgers, and the more reserved and analytical Tom focused on operations, continuous improvement, and technology evaluation and adoption.

As early adopters of Web-to-print and online storefronts, digital printing, cross-media communications and LED-UV sheetfed offset printing (including a 10-color RMGT 9210P LED-UV long perfector that was installed in 2015), the Metzgers helped drive these technologies forward. Their Metzgers Education Center also remained at the forefront of educating their customers and prospects.

In fact, the market success, ethical business practices and personal reputation of the Metzger brothers led to both Joe Metzger (2010) and Tom Metzger (2016) being inducted into the Printing Impressions/RIT Printing Industry Hall of Fame. Tom was also proud of other awards and honors that he and Metzgers received, including the Entrepreneurial and Business Excellence Hall of Fame, the Printing Industries of Ohio Hall of Distinction, as well as receiving the Torch Award for Marketplace Ethics from the Better Business Bureau. 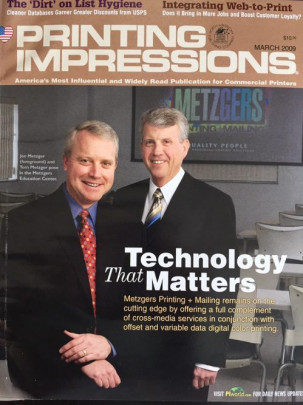 Tom Metzger (right) appeared with his brother Joe on the cover of Printing Impressions in 2009.

In November of 2011, then-company president Joe Metzger had to take a leave of absence in order to focus on fighting colon cancer, which he had endured 22 years earlier. Sadly, Joe succumbed to the disease in May of 2014, at the age of 50. And 10 years prior to Joe’s death, oldest brother Dick Metzger had fallen victim to cancer, also at age 50. Company founder Norb Metzger passed away in 2012 at age 79.

During Joe's absence from helping to run the business day-to-day and his subsequent passing, Tom Metzger rose to the task and proved himself to be a gifted and entrepreneurial leader. Tom also led by example, with a strong work ethic, inventive mind and a deep loyalty to those around him. He cherished his relationships forged with co-workers; clients; and peers within the printing industry, including fellow members of The Silver Pen peer group.

Like his two brothers, Tom valiantly faced serious health issues during his adulthood. He first battled cancer in 1989, defeating lymphoma with the help of radiation treatments. In 2006, Tom also had his first heart surgery. He would eventually overcome a second bout with cancer and also undergo a second major heart surgery.

"Doctors encouraged him to become more active, which he naturally took as a challenge," his obituary noted. "In 2009, Tom completed the Chicago Marathon. Then he did it again. And again. And a fourth time, running his last Chicago Marathon in 2014." But the earlier radiation treatments had compromised his respiratory system, which is what ultimately caused his death.

Tom Metzger drew pride from not only operating a family business, but ensuring its longevity and success. He was grateful to share in each achievement with his father, brothers, sister, and more recently his 31-year-old son, Tony.

Tony is now serving as Metzgers' president and owner. He has worked full-time at the company since 2010, and earned a degree in business operations from the University of Dayton. "It's been a balancing act [dealing with family matters] these past couple of weeks, while also trying to take care of the business side," Tony Metzger acknowledged to me in an interview late last week.

For Tom Metzger, family stood above all else. He loved baseball and enjoyed coaching both of his sons in sports. His goal was to visit every MLB baseball stadium and he also enjoyed travel, including the trip he made to Düsseldorf, Germany, in 2016 to attend drupa. Tom also attended the Inkjet Summit in 2015 to investigate how production inkjet technology was progressing and how it might best fit into the Metzgers operation.

Tony Metzger shared Tom's sentiments about the importance of family when he sent out an open letter to Metzgers customers and vendors to announce his father's passing, Tony Metzger wrote: "As Tom would say, 'family has always been critical to the company’s successes.' I’m proud to be the third generation to lead this company, and am prepared to carry on the legacy and dreams of Norb, Tom and Joe.

"Together, they built an amazing team over the company’s 42-year history. Tom’s sister, Connie, will celebrate 20 years at Metzgers in 2019 and I am surrounded by our leadership team of five that has a combined history of over 100 years with Metzgers," he added. "Together, we are committed to moving forward and continuing to be the great company you have come to rely upon.

"On a personal note, I could have never asked for a better father, coach, mentor, or boss than I had in Tom," Tony Metzger concluded. "He was a family man to his core, and did anything and everything he could for his wife, sons and everyone in his family. He always supported my brother and I in all of our decisions throughout our school years and into our professional lives, and he was always ready to grab a beer with anyone who wanted to talk."

The Metzger family requests that those interested in honoring Tom's legacy should consider making a donation to Hospice of Northwest Ohio or ProMedica Hickman Cancer Center at Flower Hospital.