Life has often been described as a long and winding road, one that can lift you high on a magnificent journey or drag you along the ground. Often times, it’s both.

Tom Metzger has seen the highs and lows life has to offer. He’s the chairman and CEO of Metzgers — an $18 million offset, digital and wide-format performer based in Toledo, Ohio — an establishment that has enjoyed solid growth in recent years, aided by the addition of a 10-color long perfecting press. The printer continues to extend its product and service capabilities, and Metzger is brimming with excitement for what the future holds.

“One of the key factors in our growth has been curiosity — the curiosity of what’s next,” Metzger observes of his company, which is celebrating its 40th year of business in 2016. “What is the next service we can provide to our customers? We have learned to ask and then to listen.

“Growing up in the business has been a learning experience from day one,” he adds. “The changes have been crazy: both crazy in what they actually are and crazy in terms of the extreme amount of change we have experienced.”

When change demanded that Metzgers make the jump from 29˝-format sheetfed presses to a 40˝ format in 2006, the company committed completely with ancillary additions made to prepress, workflow, binding, shipping and receiving departments. It was a defining moment in the company’s history and acknowledged a future that would include much growth and, 10 years later, a place for Tom Metzger, 59, among the 2016 Printing Impressions/RIT Printing Industry Hall of Fame class.

“It was a welcome and good challenge, because it meant we were growing, but there were a lot of costs involved,” Metzger recalls. “Here and now, it was one of the best things we ever did, but it was a definite challenge.” 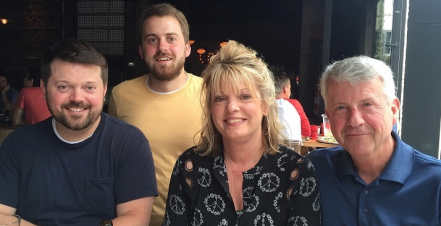 The Metzger family, which includes (from the left) Adam, Tony, Anita and Tom, enjoy a quiet night out for dinner together.

Business aside, the past four years have been especially tough on Tom and the entire Metzger family. It was a period that has tested Metzger’s mettle and continues to do so today.

In November of 2011, company president Joe Metzger — Tom’s brother and a 2010 Hall of Fame inductee — took a leave of absence in order to focus on fighting cancer, which he had endured 22 years earlier. Sadly, he succumbed to the disease in May of 2014 at the age of 50.

Two years earlier, in 2012, Tom Metzger’s father (and company founder) Norbert Metzger passed away at the age of 79. Ten years prior to Joe’s death, older brother Dick Metzger had fallen victim to cancer, also at 50.

Tom Metzger credits a strong support system, at home and at the shop, in helping him battle through the grief. “Joe’s passing was a big blow to our family and to the business,” he says. “Joe was my partner and a strong force in this industry. I’m still not over it; it’s an ongoing battle. “There’s never a day I don’t think about him. Every time I have a difficult decision to make, I think, ‘What would my brother do?’ We did such a great job of playing devil’s advocate with each other. I was always the inside operations guy and Joe was the outside sales guy. Both of us have a son working at the company: John is Joe’s son and Tony is mine. Tony is an inside guy like I was, and John has assumed a lot of Joe’s personality.”

Family has always been critical to the company’s success. Tom Metzger was the second oldest of five children growing up in Toledo. As a child, he worked odd jobs like mowing lawns and delivering newspapers, and followed his father’s motto of “work hard, play hard.” Norbert Metzger, whose father was a printer, had carved out a career for himself as a typesetter. Thus, the printing industry was fairly ingrained in Tom Metzger’s DNA.

Still, a career in printing wasn’t a fait accompli. Upon graduating high school, he was an apprentice tool and die maker. This was around the same time that Norbert Metzger decided to hang his own typesetting shingle as Type House. During a “vacation,” Tom Metzger gave the family business an audition, and a bounty of incoming work convinced him to stick around.

Technology dictated that Type House diversify, especially in the 1980s as the introduction of the Macintosh computer greatly simplified the typesetting process. The name of the company changed to Metzgers PrePress, and it wasn’t long before the company obtained a small press. Digital color printing was introduced in 1991, and digital wide-format output followed suit in 1996. The business moved to Holland, Ohio, launched online ordering and bolstered its direct marketing capabilities.

Metzgers continues to evolve and now calls Toledo home, but some things never change, like working hard to satisfy customers. That was the lasting impression Norb Metzger left on his sons.

Some Good Fatherly Advice
“He taught me to work hard and work smart,” Metzger relates. “We did a lot of activities outside of work — softball, bowling, vacations — and as I got older, we seemed to get closer. As father and son, were partners in business and great friends.”

That Tom Metzger began with the company on the ground floor and has experience in most facets of the business provides value on the managerial end. His zeal for printing also shines through; Metzger arrives at the office early enough and leaves late enough to see all three shifts. Leading by example, as old-fashioned as it may sound, still resonates with most people.

Click here to watch a video interview with Tom Metzger.

Metzger is also active on the industry association front, supporting the Printing Industries of America on both the local and national levels. He is also a member of the Silver Pen peer group, which can provide a sounding board for the many common challenges that printers face. Members also share personal stories.

One of the members who enjoys sharing is Les Davis, president of Lithtex Printing Solutions in Hillsboro, Ore. Davis was extremely impressed with the way Metzger held the company together while taking care of business following the death of his brother and partner.

“When we’re dealing with industry-related issues and trying to determine the right thing to do, Tom is one of the guys you want in the room,” Davis explains. “He’s very knowledgeable about the nuts and bolts of the business because that’s what he did for so many years. He brings that perspective to the managerial elements that we deal with every day.

“Tom is open, innovative and willing to share. You really value his input when you’re trying to solve a problem. He’s just been a stellar member of our group.”

Jim Kapela, an account manager for Millcraft Paper & Packaging, has been calling on Metzger since 1989 and has fortified the company with paper and packaging supplies for more than 25 years. Kapela is heartened by how Metzger regards his company and customers as one big family.

“Tom is a gentleman, a family man, and as a business owner and employer, he treats them like family,” Kapela says. “He’s a true friend and has been a great person to work with. From an industry perspective, he’s also an innovator. He likes to stay on top of technology. Tom’s careful on how he spends his money, but at the same tine, he has a shop that is state of the art.”

Metzger has been married for 35 years to his “wonderful and supportive” wife Anita, and the couple have two boys, Tony and Adam. The Metzgers have visited numerous baseball stadiums over the years and enjoy traveling. Chicago is one of their favorite cities, with many great restaurants.

An avid runner, Metzger can be found zipping through local parks five times a week. It started with a recommendation from his doctor to get some exercise, and now he has finished the Chicago Marathon four times. A cancer survivor himself who has seen the disease ravage those he loved, running allows Metzger to have private time to take stock of his life and the direction his two feet are taking him.

“Cancer gives you a different perspective,” he says. “Maybe it sounds cliché, but you have to live each day to the fullest, because you just never know. My family has learned that the hard way. I do everything I can to make the most of every single day.” PI