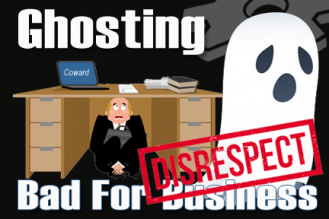 I was visiting with a young IT salesperson, discussing the nuances of Sales & Marketing. As we talked, I vented my frustrations about certain business people who correspond with me for a while, and then seem to disappear into thin air. My young millennial friend laughed, and said, “Oh, they’re ghosting on you!”

“What is ghosting?” I asked.

He explained that, “Ghosting is the practice of ending a relationship with someone, suddenly and without explanation. Whereby, a person withdraws from all communication as if it never happened.” Apparently, the term ghosting is more widely-used among the younger generation.

“Oh, you mean crawfishing!” I put in. “Those with sales experience often use that term.”

For those who don’t go fishing much, a crawfish is a creature that looks like an under-nourished lobster. When I was kid, we used to put a little bacon on a string to lure a crawfish out of its mud hole. If the crawfish spotted us first, it would tuck its tail and scurry out of sight, retreating back into its mud hole; sometimes disappearing for good.

Some people are like that! So “crawfishing” isn’t just an attempt to CATCH a skittish crawfish. The term might also apply to someone who shows a great deal of interest in you and your product, and then goes totally silent on you.

I suggest that, whether you “ghost” or “crawfish” on someone - you should stop and consider!

When a legitimate company reaches out to another company or person for information, and the called company goes to great lengths to supply that information, are they not owed some kind of professional courtesy? At the very least, respecting other’s time and efforts shows regard. It takes only seconds to reply to or send an email telling a person “Thanks!” or “Thanks, but I’m not interested now.”

However, showing a great deal of interest; repeatedly tying up a business owners time with detailed questions - even asking for special documents to be sent - and then falling off the planet, is bad business!

Our company has had experience providing certain information that took days to compile. Then without any consideration or reason, the recipient of our hard work decides to “ghost” or “crawfish” on us.

You’ll forgive my gentle suggestion that, that kind of business is rude, disrespectful, cowardly and lazy.  Bad manners, bad business - not to mention, WIMPY!

There, got that off my chest! Reminds me of another blog titled, Wimpy Bosses!

As I wrote this blog, I realized that I may be coming off sort of “whiny,” at least that’s how my editor/wife Susan assessed the first draft.  Okay, so I apologize in advance if this blog offends anyone.

This is for those of you selling products and widgets out there - having similar experiences.

I’ve found several ways to get the “ghost” to reappear, or the “crawfish” to come to the surface. After all, some ghosts really do have legitimate excuses for disappearing. But, using very tasteful emails is often able to lure them back. Personally, I will send out three to four emails to lure them out - below is one example:

I’m reaching out again to you on behalf of System100, and having a tough time getting in touch with you. Typically when someone does not respond, it could be a few things:

If you are interested but you’ve just been tied up, let me know a better time to get in touch with you. I would appreciate having a brief conversation about your organizational goals via systematization for your business.

Please let me know, either way. Thanks!

After sending out these type emails, however, if the person still doesn’t respond, then I suggest they would not be the type of client you want anyway. Therefore, move on!

Lessons Learned as a Child

I guess my editor/wife Susan will hit a snag here again, as I haven’t quite finished reproving some whom I believe haven’t the good business sense or courtesy that God gave a rock!  It’s a crying shame! (I can’t help myself!)

At this stage of my life, it’s hard to believe that many so-called business people believe real people don’t live on the other end of their emails and phone calls! For those just scanning this blog, I’m not talking about replying to automated emails and spam.

I’m compelled to tell certain grown business leaders to be respectful and considerate of those who reach out to them in a respectful manner. Especially, those from whom they’ve requested specific information - YES or NO, can save a lot of misunderstanding!

You know, when I was a kid, we used to call this kind of training, Sunday School!