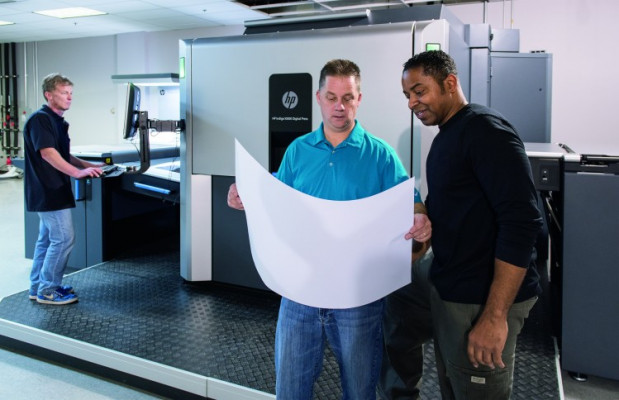 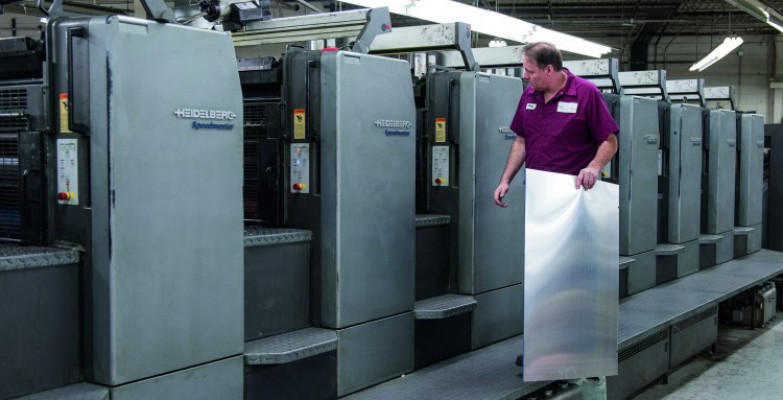 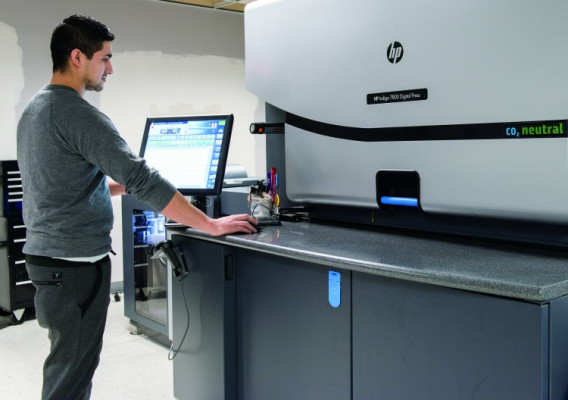 George Roman inspects the monitor at one of Quantum’s new cadre of HP Indigo presses. The firm now has five Indigos in all. 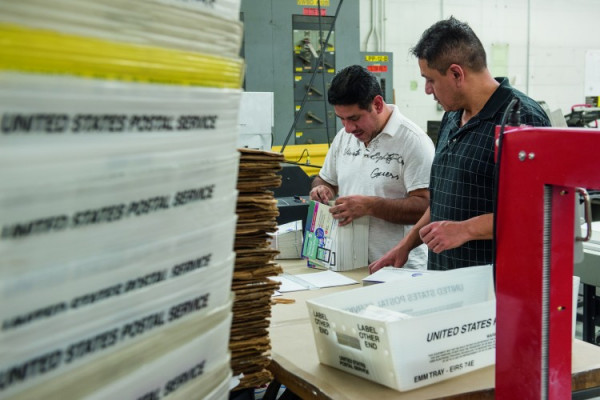 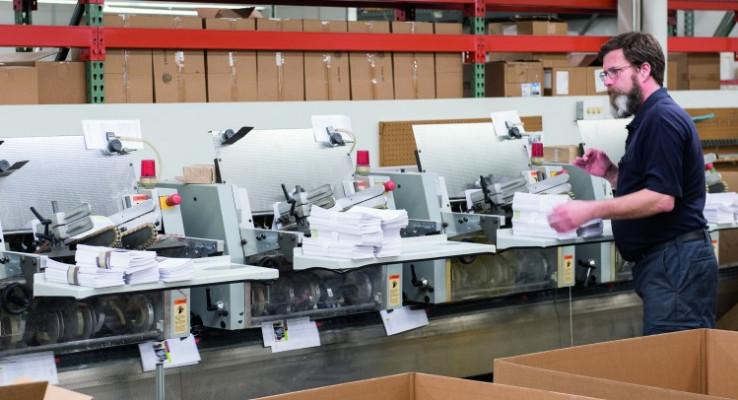 There is a curious yet charming mixture of contrasting styles to be found in the makeup of Morton Grove, Illinois-based Quantum Group.

The company boasts a customer service philosophy reminiscent of a century-old print provider, yet the firm was founded in 1992. The mom-and-pop vibe it exudes is belied by its status as an IT-savvy, data security-conscious, $38.5 million performer that wages battle with the likes of multibillion dollar competitors.

And just when you think it’s OK to peg Quantum Group as a dyed-in-the-wool sheetfed offset printer — after all, it’s not even 25 years old yet — the company is in the midst of a continuing transformation to digital printing, with an eye toward adding production inkjet in the foreseeable future. It has grown to become a leader in enterprise marketing execution, backed by a customized program platform model that continues to grow and evolve.

Although a “Quantum Leap” seems to be in progress with the printer — oh boy, save the Scott Bakula jokes — there are no signs that this particular adventure drama is about to be cancelled.

One of the critical elements behind Quantum Group’s success is its willingness to embrace the changes that have marked the last decade or so. Bill White, company CEO and a member of the group that bought the company in 1995, was not content with riding the wave of early success.

“In the early 2000s, it became clear that the offset printing market would continue to suffer,” he says. “We started the transformation into digital printing so that we could support 1:1 marketing and personalization. We entered financial statement production, which is the ultimate in variable data printing.”

In 2006, Quantum Group acquired Consolidated Press, which helped to fuel the company’s foray into digital printing. The digital printing infusion brought about the need for mailing and fulfillment operations, so Quantum Group executed separate deals to obtain boutique businesses in each specialization. It enabled 1:1 personalization of letters and brochures, along with intelligent mail inserting. And while the fulfillment operation is relatively large, the company performs more boutique custom/complex fulfillment programs.

The company’s current business model focuses on helping clients with large communications needs and challenges. Annual revenue increases since 2007 are the result of constructing customized program platforms to maximize customers’ return for their marketing dollars while reaping cost and production efficiencies. In addition to sheetfed offset and cut-sheet digital printing, the company provides finishing, the aforementioned mailing and fulfillment, data integration and security, marketing automation tools and technology consulting — all under one roof. Quantum serves verticals that include financial and insurance, health care, casinos and hospitality, food and beverage, retail and consumer goods, service providers and manufacturing.

“We’ve added many capabilities to augment the mix of verticals we support,” White remarks.

Quantum COO Frank Springer notes the company was looking to move to a fifth color platform. Few digital print providers, he adds, can provide such an extended color gamut in quality mode.

“We feel that the quality of HP Indigo output is superior to other digital devices,” he says. “Also, the HP Indigo 10000’s 20x29˝ sheet size opens up extra production capacity and addresses the digital personalization market. This also allows us to bridge the gap between offset and digital, as the HP Indigo 10000 can address the shorter run static color market with minimal setups and speeds that are acceptable.”

Betsy Davis, the executive vice president of sales and marketing at Quantum Group, believes that HP has excelled at promoting itself and selling the quality of HP Indigo equipment at the corporate level among Fortune 500 and midmarket companies that Quantum sought to reach.

“When the opportunity presented itself, we knew there would be clients we could reach and offer new solutions,” she says. “The 10000 was a big part of that, for personalization of larger-format products like pocket folders and large brochures. It was also attractive to companies with PMS colors significant to their brands.”

It also appears that production inkjet could well be in Quantum Group’s near future. Springer points to the company’s significant growth in areas such as Web-to-print storefronts and transactional printing as being among the motivating factors. Moving into high-speed inkjet, he says, would allow the company to better address the significant spikes in business.

“We think either roll-to-roll or roll-to-sheet inkjet fits the next phase of our growth,” he says. “It’s an exciting proposition.”

Exciting changes are already deeply ingrained in Quantum Group’s legacy. The company has solidified its standing as a qualified handler of customer data with security certifications from SOC (AICPA Security Organizational Control), FISMA (Federal Information Security Management Act) and HIPAA (Health Insurance Portability and Accountability Act). For the FISMA certification, Quantum garnered Level 2, the highest in consideration of its customers (Level 3 applies to credit card companies, which is not applicable to Quantum Group).

“We are certified at the highest appropriate level, thereby giving our customers comfort that the data they entrust to us is handled securely,” White remarks. “In the pharmaceutical world, we live, breathe and understand HIPAA requirements. That has allowed us to expand into the health care universe, as well. We do some work for insurance companies selling ‘Obamacare.’ We’re also significantly involved in the gaming industry, because they maintain significant data on their customers and we can help them market more effectively to their base with personalized communications. We serve many verticals that help maintain our positive growth track and enable Quantum to be vibrant.”

Davis envisions the data proficiency and the company’s technology divisions as being catalysts for future growth—buoyed, in large part, by Quantum Group’s ability to be much more nimble and responsive to customers’ needs. This, she feels, is a point of differentiation in contrast to its larger, publicly traded contemporaries.

Quantum Group’s Midwestern position enables it to fuel the marketing and distribution requirements of clients with distributed sales channels, as evidenced by its sound relationships with companies in the pharmaceutical, manufacturing, financial services, senior care and other verticals. “We also have significant opportunities in a data-to-template environment, integrating with clients’ CRM solutions to generate direct mail and personalized communications,” Davis notes.

Ira Shapiro, the company’s new chief information officer, echoed the sentiments regarding Quantum Group’s IT capabilities. He points out that the company has 17 dedicated IT professionals and plans to add more positions by the end of the summer.

“We have a strong team that can write the software solutions which meet and exceed client expectations and will help us drive the business that we go after,” Shapiro says. “Our philosophy has been that we accommodate our customers’ workflows. We bring them best practices, but we also try to fit the needs of each client rather than plugging in something that came off the shelf. It’s a significant advantage for Quantum over other providers.”

Davis points out that customers are increasingly technology savvy, and the movement toward multi-touch, multi-channel marketing campaigns is an increasingly relevant conversation. Leveraging each of the growing lists of channels enables Quantum’s clients, in turn, to communicate more effectively with their end users.

Says Shapiro of the IT vantage point, “Technology changes continue to evolve the organization and the marketplace. This can translate into new streams of data and new ways to utilize and view this data. We’re going to be more than just a printer for clients. We’re going to be partners in the data that we’re mining for them and helping them identify the value of their customer relationships. We’re also looking internally at how we can utilize changes in the technology landscape to continue to drive costs out of our business and stay focused on the solutions that our customers need.”

In the final analysis, notes White, the correlation between Quantum Group’s success and its clients’ fortunes is the company’s primary motivation. White is proud of his employee base — a dedicated, experienced team that has completely bought into what the senior executive team is trying to accomplish. The employees relish the daily tasks and take to the challenges that newer technologies are offering the company and, ostensibly, its clientele.

“We’re always bringing the latest and most efficient technology, production and marketing automation tools to help our customers be successful,” he says. “That’s what we do best and how we want to be perceived.” PI