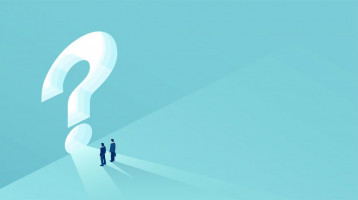 On Nov. 27, 2021, the strategic party submitted a non-binding proposal to buy Chicago-based RRD for $10 share in cash, subject to certain terms and conditions. But there was no word from the RRD board of directors concerning the offer status of that mystery buyer — referred to simply as "Party C" by RRD's board — for more than a month.

And, just when financial buyer Chatham thought it had finally prevailed to acquire North America's largest commercial printer after outbidding Atlas with its final, $10.85 per share all-cash offer, worth a reported enterprise deal value of $2.3 billion, RRD announced on Dec. 31, 2021, it received a non-binding alternative offer from Party C at $11 per share in cash, again subject to certain terms and conditions.

As part of its amended proposal, the strategic buyer also indicated it would pay the $12 million expense reimbursement fee RRD would owe Chatham — which was RRD's largest bondholder and a 14.99% common stock shareholder — for terminating their pending acquisition agreement, as well as reimburse Chatham the $20 million termination fee it paid Atlas Holdings on RRD's behalf to terminate the amended sales agreement reached between RRD and Atlas.

Party C followed up on Jan. 3, 2022, with an even higher bid to acquire the publicly-held printing conglomerate. In a press release, RRD said the strategic party had indicated it was targeting Jan. 21, 2022, when it planned to submit a binding offer. In lieu of submitting a binding proposal, RRD indicated Party C delivered the following stipulations, among other terms and conditions:

Ultimately, though, it appeared that Party C was unable to secure the needed financing in order to make a binding, fully-financed offer, leading the RRD board to recommend to its shareholders that they accept Chatham's proposal. In a virtual special stakeholder meeting on Feb. 23, shareholders accepted the $10.85 per share Chatham offer, and the transaction that finally took the $4.8 billion in sales company private was able to close just two days later, largely since the antitrust waiting period had already passed.

The only part of the RRD saga that remained a mystery was the name of the strategic party itself. That seems to finally have been solved based on an article published March 1 by M&A and antitrust reporter Diane Alter, of Dealreporter. According to Alter, who cited various unnamed sources familiar with the situation, the unnamed strategic party bidder was the Paragon Group, which is headquartered in Dublin, Ireland.

With 9,000 employees working in 20+ countries, the €1.214 billion (Euros) in annul sales Paragon provides business-critical, omnichannel communications, secure (including RFID) identification and smart cards, graphics, and office services primarily within the European market. The RRD deal would have immediately provided Paragon a strong presence in the North American market. 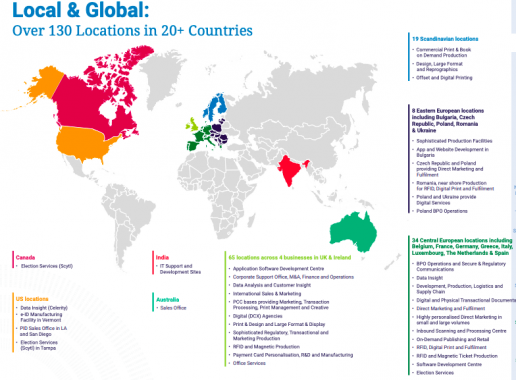 A breakdown of Paragon Group activities based on its most recent annual report. | Click to enlarge

The privately held Paragon — which completed eight M&A deals last year alone — and RRD weren't strangers to each other. Paragon acquired RRD’s European Global Document Solutions (GDS) business, headquartered in the UK, for an undisclosed amount, in October of 2019. GDS, a provider of document management services and solutions, had locations in the UK, France, Spain, Germany, Netherlands, Poland, and Italy, and employs approximately 1,500 people. GDS’ net sales were approximately $270 million in 2018.

Executive Chairman Patrick Crean is Paragon’s principal shareholder and served as CEO since 1998. He previously was a Group COO with Adare Group, and also held various positions with Clondalkin Group during the 1980s.

According to Alter, while Paragon was an engaged bidder, “it could not come up with proof of financing,” leaving the RRD board no choice but to accept the $10.85 per share Chatham offer.

“Chatham, as the largest [RRD] bondholder, needed this deal the most," another insider source told Alter.

And the fact Chatham held such a large bondholder stake, it appears, was a key driver for its relentless pursuit to acquire RRD both through litigation efforts and by raising its per share offers, despite the efforts of RRD's board to find a different buyer.