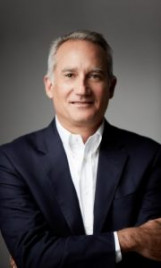 The proposed $1.4 billion acquisition of Chicago-based LSC Communications by Sussex, Wis.-based Quad still faces one last hurdle: approval from the U.S. Department of Justice's (DOJ) antitrust division. All along, Quad Chairman, President and CEO Joel Quadracci has remained upbeat that the deal — which would make the combined commercial printing conglomerate the largest in North America with approximately $8.1 billion in sales — will close some time around mid-year.

Quad is expected to report its second quarter earnings in the July 29-30 timeframe, so one can assume his organization is pushing hard behind the scenes to have the framework of the deal approved by then, in order to give him and Quad CFO Dave Honan more favorable talking points to relay to analysts during the earnings call than just its quarterly results and current guidance.

The pending DOJ decision about the coupling of the two publicly-held entities has also received a lot of attention both in, and outside, of the printing industry. I've received an ongoing stream of calls from Wall Street analysts and researchers at hedge funds (some pondering intentions whether or not to buy or, even more so, short the stock) seeking my opinion on the matter as a long-time industry watcher. Similarly, I've also been in continued contact with some fellow journalists who specialize in covering and investigating the antitrust implications for various proposed M&A transactions.

One such writer is Diane Alter, of CTFN. Her article filed Friday, June 7, cited an "unnamed source close to the situation" who indicated that Quad and the DOJ are in the midst of negotiating a settlement, which will likely be submitted to the DOJ "front office" by the end of June, and then finalized around mid-summer. Alter also reported that her source was unsure whether or not the DOJ would require Quad or LSC to divest any of their holdings in order to pass the DOJ's antitrust requirements. LSC, for example, divested its European operations to the Walstead Group in July 2018, most likely as a preemptive move prior to the Oct. 31, 2018, announcement of its intention to be acquired by Quad. 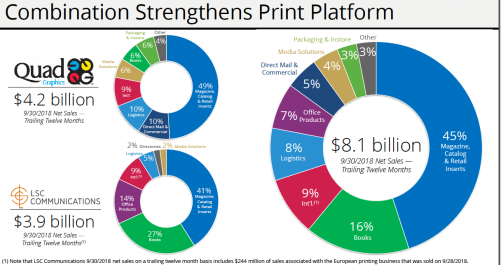 Here's a breakdown of both the individual and combined print product segment mixes once, and if, the acquisition of LSC by Quad is completed. (Click to enlarge.)

The DOJ is likely scrutinizing how the proposed coupling would potentially monopolize the long-run publication gravure printing market, as well as the U.S. magazine distribution and logistics network, including co-mail advantages. Perhaps a bit surprisingly, major publishers have remained eerily quiet about how the deal would impact their print vendor options and, in theory, give Quad the upper hand when it comes to pricing power.

The only public complaint came from The Authors Guild and PEN America — two authors organizations — in conjunction with the Open Markets Institute, which collectively sent a letter to the DOJ imploring it to require the two printing companies to divest their magazine distribution operations.

According to the 2018 Printing Impressions 400 list of the largest printers in the U.S. and Canada ranked by annual sales (click here to access the complete list), Quad and LSC collectively generated approximately $2.31 billion in publication printing segment sales and $1.26 billion in book printing sales in their most recent fiscal years. This makes them the two largest industry players in those markets — not counting the CJK Group, a privately-held national book manufacturer and industry consolidator that won't divulge its annual revenues or segment sales by product.

I've argued all along (including what I wrote when the proposed Quad/LSC deal was first announced) that the M&A transaction will ultimately receive the DOJ's blessing, albeit with the regulatory agency potentially requiring the combined entity to make some adjustments or divestitures. Two main reasons: 1) the printing industry still remains fragmented in comparison to many other manufacturing sectors and 2) it's not a high-profile industry from the standpoint of the public at large or for having a direct impact on consumers. (One stark comparison, for example, is the proposed merger between Sprint and T-Mobile that is currently facing DOJ antitrust scrutiny.)

Ike Brannon, president of Capital Policy Analytics and a contributor to Forbes, recently penned an article that also favors DOJ approval of the merger and which minimizes the deal's impact on long-run magazine publishers. He pointed out there are currently about 77 publications with a print run of more than one million copies, also noting that figure will undoubtedly decline in the years ahead due to continued pressures from electronic media.

"Making a merger decision that looks at today’s economic realities and does not consider the incipient decline of the print environment has the potential to stifle the cost reductions needed for the print industry to compete against digital publications," Brannon argued in his commentary.

He also noted how large publishers often split their magazine print runs between multiple printers to get the best price for their press runs. "The print industry has hundreds of competitors fighting over a shrinking share of business, and exerting market power is difficult for any one of them to do," Brannon wrote.

Some privately-held publication and book printers I've talked to actually favor the Quad/LSC deal, noting that many publication and book publishers will prefer to work with smaller print providers like them, which will be able to provide more personalized service and greater deadline and print order run-length flexibility.

As the summer heats up, so too will anticipation over the DOJ's final decision. From my perch, it's not a matter of if the DOJ will allow the acquisition to proceed or not, but rather what stipulations — if any, and how major — the agency may impose in conjunction with its final blessing.