Hederman Brothers Stays Ahead of the Times Through Major Investments 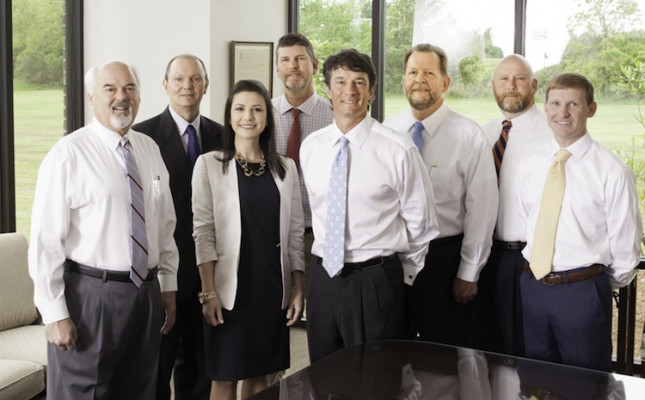 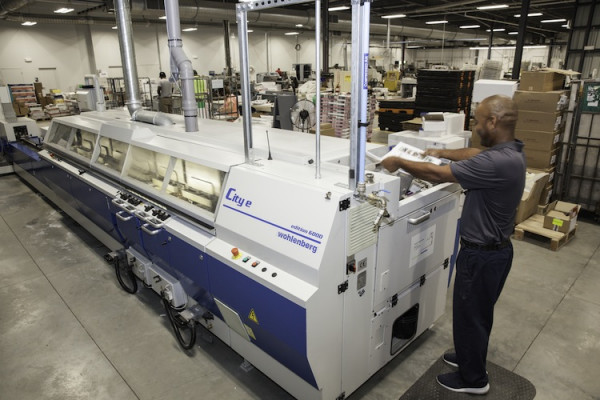 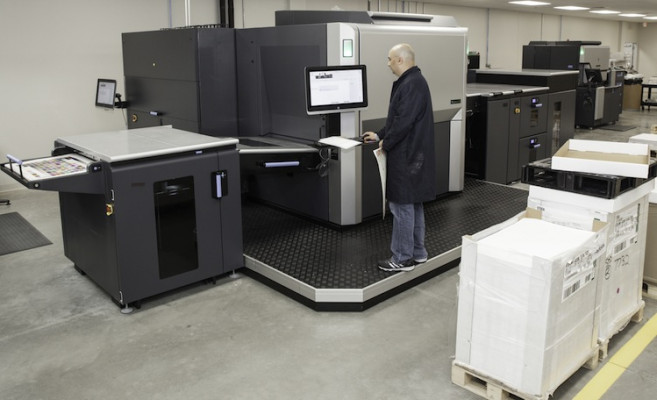 Michael Lopez processes a job on the six-color HP Indigo 12000 digital press. An HP Indigo 7600 is also in operation.

A 21st century company with roots in the 19th century will have faced down many challenges: economic depressions, societal change, natural disasters and, in the case of a printing establishment, the rise of alternatives to the very thing that makes the business of printing viable in the first place. If the company’s story isn’t one of continuous adaptation and reinvention, there can be no story to tell at all.

Such is the narrative that has been unfolding at Hederman Brothers since 1898 — and the tale isn’t done yet. A recent move to a new facility and a major investment in capital equipment have broadened its capabilities as a commercial printing business. The expansion also has brought the company even more opportunities to demonstrate what Bert Jackson, executive VP of sales, calls “a culture of service to our customers that has no boundaries.”

The fourth-generation family business serves a clientele within a 300-mile radius of its hometown in central Mississippi and throughout the state as a whole. As a specialist provider of printing services to the gaming industry, its reach extends considerably farther than that. Doug Hederman, president and CEO of Hederman Brothers, says that business has been brisk on all fronts, with sales growing between 8% and 11% annually during the past three years.

Usually, a printing company experiencing growth at this pace finds itself needing more equipment to print with and more room to operate it in. For Hederman Brothers, the opportunity to add machinery was clear, but the space requirement was different. What the firm needed wasn’t more room, but surroundings that made a better fit to the production workflow in which it was now operating.

Hederman and his management team saw that in order to do more work in a smarter space, they would have to leave the building in the city of Ridgeland that the company had occupied since 1993. That led to last year’s construction of a new production plant in nearby Gluckstadt, an unincorporated town in Madison County near the cities of Madison and Canton.

As Hederman recalls, the goal of relocating truly was a dream with a deadline: the company had only a year from the sale of the Ridgeland building to be fully up and running in a new site. He and his workforce of 95 accomplished it in about half that time in a process that was, Hederman says, “seamless for our customers” — and wholly without interruptions to jobs in progress.

They did it by continuing operations at the old site right up until the time that the Gluckstadt plant was in production with its new equipment. Jackson says that both operated simultaneously for about a month until the move-in was complete in February of this year. Because the company had done the same thing when it first moved into the plant it was now vacating, there was a reliable road map to follow.

At 50,000 sq. ft., the Gluckstadt building is slightly smaller than the premises the company left behind — but in this case, less square footage and more efficient equipment equate to more space better utilized.

Hederman explains that as workflows change, the layout of the plant must change along with them so that people, as well as machines, will have the right amounts of well-ordered space to work together in. Prepress, for instance, no longer needs to sprawl the way it used to in the days when it was film-based.

Optimizing the workspace includes streamlining internal communications. Flat-screen TVs at various locations in the plant carry personnel news such as new hires and employee birthdays. The monitors also share key production data — for example, the number of impressions printed — as well as general information about how the company is doing.

Hederman and his executive team study reports from the plant’s management information system for patterns that tell them what customers are buying and what kinds of resources are needed to support the requirement. The MIS data showed, for example, a drop in demand for PMS spot color work and a rise in orders for printing in full-color: a clue to the kinds of capability the company should be investing in.

Insights like this guided the decision to re-equip the production department in conjunction with the move, on which a total of about $10 million was spent. Major installations included a fully automated Best Osako Tener Alpha saddlestitcher; a fully automated, 16-pocket Wohlenberg City E perfect binder; a Perfecta 76 cutter for the digital department; a Kodak Magnus 800 CTP system with autoloader; a Heidelberg SM 52-4+L offset press; and, as the centerpiece of the makeover, a six-color, 41˝ KBA Rapida 106 sheetfed offset press with Busch auto skid turner that Hederman had placed an order for at drupa 2016.

In addition to a top speed of 20,000 impressions/hr., the KBA Rapida 106’s high-performance features include coating, LED-UV curing from AMS Spectral UV, and KBA’s QualiTronic in-line color control technology. It came online in January under the supervision of John Shaw, printing manager, who familiarized press crews on each of the plant’s three shifts with the machine while operations at the former site were being wound down.

He says that among the things they learned is, that with the help of its on-board color management system, the fast-makeready press can come up to color in 400 sheets on the first signature and in as few as 200 sheets on subsequent ones.

The Rapida 106 at Hederman Brothers is the first of its type in North America with dual high-power XP-11 LED lamps. Shaw says the press is in continuous use for UV-cured, four-color printing and spot coating, getting particularly striking results on uncoated papers. Even in jobs with heavy coverages, LED-UV exposure dries and hardens inks while drawing just a fraction of the energy consumed by older UV systems. It’s so efficient, notes Shaw, that “I don’t know what a curing problem is.”

About 60% of what the company produces comes from the Rapida 106 and its other offset presses. The remainder is digital printing or digital imprinting over preprinted offset shells. The principal digital platforms are a seven-color HP Indigo 7600 with a software upgrade to 7800 performance; and a six-color HP Indigo 12000. The value of these digital presses, says Hederman, is twofold: they print short runs economically, and they take process steps and labor out of production routines.

He already produces a larger share of his volume digitally than do the other members of the printers’ peer group he belongs to. Expecting to do still more digital work as his customers move to shorter, targeted runs, Hederman says his next investment could be in digital finishing equipment to make that side of the operation as productive as possible.

The company puts all of these assets at the disposal of customers from colleges and universities, corporations, advertising and creative agencies, and fast casual restaurants. The college and university market is a particularly important vertical for Hederman Brothers, which produces brochures, catalogs, magazines and other materials for schools throughout the state and elsewhere in the South.

Another sector that has paid off handsomely for the company is casino gambling, which has been legal in Mississippi since 1990. Hederman Brothers prints for about two dozen casinos, including most of the major ones in its home state and others as far away as Iowa and Nevada. These establishments buy everything from static and variable direct mail and brochures to in-room dining guides, key card holders and scratch-off cards.

Hederman calls his gaming customers integral to the company’s success both for the revenue they produce — about 25% of the total is gaming-related — and for the demands they place upon its service model. Much of the work is time-sensitive, and quality requirements usually are high.

“They care dearly about their data,” Hederman says, noting that the plant’s ISO certification for quality assurance underscores the commitment to process control that the casinos expect. Hederman Brothers broke ground for printing industry quality assurance in Mississippi by becoming the state’s first commercial printer to be registered to ISO 9001 quality standards in 1999.

The same standards apply at Hederman Direct, the full-service direct mail division that the company has operated since 2005. Direct mail now belongs to a portfolio of cross-media services, including personalized URLs, email blasts, texting and online marketing campaigns, which are aimed at increasing exposure and response for customers’ messaging.

Although Hederman Brothers is 119 years old, the company has never let the weight of those years get in the way of sound decisions for its evolution as a business.

In 1981, the family exited newspaper publishing by selling two dailies it had long owned to the Gannett chain. Some years later, when it became apparent that a sale of the business to a consolidator of printing firms wasn’t working out, the company bought itself back.

Where tradition does come into play is in the solidarity of the company’s response to crisis. In 2005, everyone stood together after Hurricane Katrina knocked out power for a week and devastated some of the shop’s most important customers. Surviving the great recession of 2007-2009 meant asking employees to take a pay cut until conditions improved and wages could be restored versus the possibility of some layoffs — a sacrifice that everyone including Hederman and his executive team willingly shared.

It’s not uncommon for owners of printing businesses to salute their workforces but, at Hederman Brothers, the praise isn’t the top-down kind. Hederman says that it’s “humbling” to think about the loyalty shown by his employees, whom he actively involves in management-level decisions like planning health care coverage and selecting production equipment.

Hederman believes that their years of service truly add up to the longevity that the company continues to enjoy. “They’ve done more for us than we’ve done for them,” he praises.