Get Inspired! Connecting with Customers

With the rise of mobile and social technologies, brands around the globe need to find new ways to connect and engage with consumers. When most people talk about engagement, however, the majority of time they are referring to social or mobile campaigns — but that’s really only part of the picture. Graphics, interactive displays, and digital signage all play a part in getting the customer engaged with a brand.

JCDecaux OneWorld offered up three “best of” OOH campaigns during December focusing on experiential. Making the most of the unique strength of OOH, advertisers were able to place themselves in the same physical space as their key audience. Using experiential brands could grow their relationship with their consumers and establish a higher brand recall, leading to brand loyalty.

Passers-by could stand in front of a digital panel displaying footage of a Labrador in the park. They had to then pretend to throw a ball. The action activated the motion recognition technology embedded into the panel. This prompted an animation of a tennis ball flying off and the lab running to fetch it. When the dog ran back and released the ball, a real ball would roll out from under the screen with promotional information printed on it.

By allowing the public to experience the joy of having a dog, the campaign effectively communicated its message. The campaign delighted the passers-by with hundreds of interactions during the week. The memorable event also generated a considerable online and TV coverage.

Holland Casino turned a tram stop in Amsterdam into a giant roulette game. JCDecaux Netherlands designed custom floor stickers showing numbers 0 to 36. The stickers were placed on the ground in front of the shelter. The team also wrapped a tram and stuck a sticker of a giant roulette ball to its side. When waiting for the tram, commuters could “place their bets” by choosing a number to stand on. As the tram pulled up, the roulette ball lined up with one of the numbers. The person standing at the number would win a prize distributed by the “croupiers” on site.

The campaign was captivating and entertaining for both the participants and the lookers-on. And Holland Casino effectively increased its brand recall and perception. 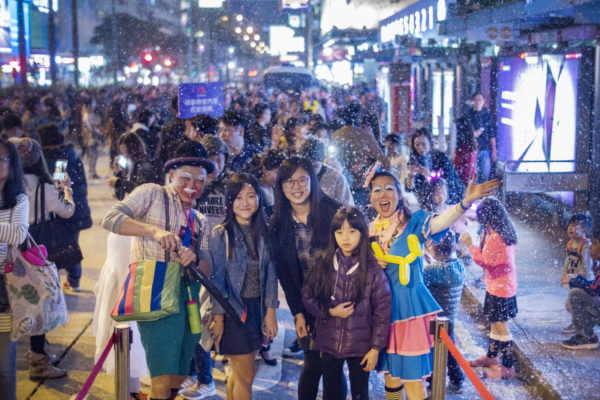 Every year the Tsim Sha Tsui road in Hong Kong closes to traffic for Christmas and New Year’s Eve. Huawei took advantage of this to throw a party and launch their Mate 9 and Mate 9 Pro smartphones.

To the pedestrians’ delight, the four bus shelters along the street shot snow into the air to make it feel like winter. Participants could enjoy free gifts and food distributed by the brand ambassadors. The public could take photos at the shelter and print them out on the spot. Huawei featured them on their Instagram feed with the hashtag #DreamItPossible1617. Finally, on Christmas and New Year’s Eve, a countdown gathered crowds to celebrate the holidays together.

Did You Do Your Nozzle Check Today?