Appearance Is Everything in Sales 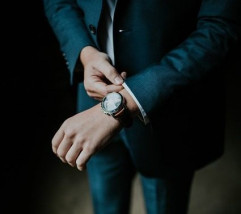 The elevator doors opened at the lobby level and two men stepped aboard. One was smartly dressed, wearing pressed slacks, a white shirt that looked like it just came out of the box, a bright tie in a Windsor knot and a blue blazer. His shoes definitely had some miles on them, but they were shined to within an inch of their life. He had the graying hair of a man who had seen his share of office buildings like this. In his arms, he carried a notebook surrounded by a leather presentation folder.

The other man was considerably younger. He wore chinos that had not seen an iron since, well, probably ever. His golf shirt was tucked in, but it bore the vague stains of someone who had seen his share of pizza parlors and coffee shops. No belt. No socks either. His hair was unkept, but not entirely unpresentable. The young man had shaved ... but just not today. He carried a pad of paper.

The two men greeted each other politely as the doors shut and the elevator began to rise. At the same time, each took in the other and quietly smiled to himself. “Geezer,” thought the younger. “Kid,” thought the elder.

Suddenly, the lights flickered and went out. The elevator came to a halt and the emergency lights came on, illuminating two surprised faces. Immediately grabbing his cell phone, the younger man groaned and said, “Looks like a power failure in the area. We might be here a while.” Then, after checking the time, added quietly, “Guess I’m going to be later than usual to my sales call.”

Boredom and uncomfortable silence led to some small talk. Eventually, the older man said, “I heard you say that you are in sales. Are you just starting out?” The younger man nodded and replied, “Sort of. I’m about to finish my second year with the company. I sell print. What about you?” “I’ve been selling since the early ’80s,” came the reply. A look of surprise came across the younger man’s face and he said, “I would not have guessed you to be a salesperson. You dress more like a company president. In fact, I was secretly hoping that you were the owner of the company that I’m about to call on!”

They both laughed and then he added, “Tell me, do you always get that dressed up to make a sales call?” “Absolutely,” the veteran rep replied, somewhat surprised at the question. “I do it because it matters.”

The younger sales rep retreated to his thoughts and a long silence ensued before he spoke again, saying, “I’ve never really thought about how I dressed as making much of a difference. My girlfriend tells me that I need to step up my game, but it’s hard when you don’t have the money to spend on clothes.”

“I understand,” said the old man. “I remember when I was younger and had to make hard choices between one expense and another. My first sales manager encouraged me to buy one nice outfit and I’ll never forget the reaction that I got from my clients the first time I wore it. It taught me a valuable lesson: A first impression is not only critical, it’s visual.

“People assumed that I was good at what I did based on how I looked to them. It mattered. I believe it helped my early sales growth. Over the years, I’ve discovered that a lot of little things matter. They make a difference even though they seem minor. No one talks about those things any more, however.”

“Such as ... ?” the young man asked, begging his new mentor to continue.

The veteran rep paused, sizing up the sincerity of the younger man before adding, “Be on time, for starters. I heard you say that you are perpetually late. It’s hard to convince a prospect that you will deliver a product on time if you, yourself, can’t keep a schedule. It matters. If you are going to be late, call, text, email or send up a flare to let the client know.

“And remember the lessons that your mother taught you about manners and common courtesies? They matter, too. For example, say ‘Thank you’ instead of ‘No problem,’ and shake hands like you mean it.

“Don’t swear. It might not seem like much, but it speaks to your character and even your integrity. Clean up your work area before leaving for the night. Get and stay organized.

“Remember names. This is especially important with receptionists and administrative assistants. They hold more power than you think.

“Never, ever gossip. It makes people wonder what you are saying about them to others.

“If you screw up a job, apologize first even if it’s not your fault. Empathy goes a long way. In this situation, and in general, don’t speak badly about your company. It does irreparable harm.

“Write thank you notes and call clients to follow up on important jobs and events. Did they just come back from a trade show? Find out how it went.

“Be very careful with what you commit to writing. The written word is far more powerful than the spoken word, not only for its content but also for your spelling, grammar and punctuation.

“And yes,” he concluded as he straightened out his tie, “dress to impress. Why? Because it matters.”

Furiously scribbling notes, the young sales rep barely noticed that the lights had come on and the elevator began to move again. The doors opened and both men walked out, heading towards the same office.

As they approached the front counter, the veteran rep greeted the receptionist warmly, calling her by her first name and exchanging pleasantries.

The young rep followed suit, applying his newfound lessons. “Whom are you here to see?” asked the receptionist. “The print buyer, please.” Offered a seat, he sat and finished writing the last of the veteran rep’s suggestions.

“It was a pleasure meeting you. Good luck,” the older rep said as he extended a hand.

“I never did ask you what you do,” the younger man said. “I help my customers to find their customers,” the veteran rep replied, adding with a smile, “I sell print, too.”

Curious, the young man asked, “Why do you put it that way?” “Because it matters,” came the response. And with that, a woman came out and whisked the older rep away.

“Excuse me,” the young rep asked, “Who is that woman?” “She’s the head of marketing,” the receptionist replied. “We have a new campaign in the works and your friend was asked to come in and provide his input.”

The young man sat for a moment, pondering the barrage of lessons. Looking down, probably for the first time, he noticed the stains on his shirt and a couple on his pants.

Standing and turning to the receptionist he said, “I think I’ll come back a little later. I’ve got some clothes shopping to do.” The receptionist frowned at him and asked, “Why do you need new clothes all of a sudden?”

“Because it matters,” came the reply.

(Note: Thanks go out to my client, Dan Canzoniero, for the conversation that led to the idea behind this column.)