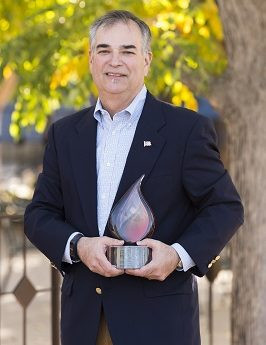 Edward Rothschild, is the recipient of the the Arvada (Colorado) Economic Development Association’s Community Spirit Award for 2017

SALT LAKE CITY - October 16, 2017 - Edward Rothschild, an AlphaGraphics Owner with Centers in Arvada, Downtown Denver, and Golden, Colo., received the Arvada (Colorado) Economic Development Association’s Community Spirit Award for 2017. The award is presented annually to a member of the Arvada community in recognition of outstanding service.

In addition to running three AlphaGraphics Centers with his wife Robin, Rothschild has donated time and resources to the Foothills Animal Shelter, helping to build a new, more animal-friendly facility. He is also a supporter of the Arvada Community Food Bank, has served on the Arvada Bicycle Advisory Committee, and chaired the Arvada Planning Commission.

“This award is representative of what this community means to me,” Rothschild says. “It has really been my honor to be part of an area that means so much to me and my family.”

Aaron Grohs, AlphaGraphics' president, also notes, "Owners like Ed represent the best of the AlphaGraphics network. We are proud of all he has accomplished and we celebrate this award with the Rothschild family.”