Some Things Fix Themselves? 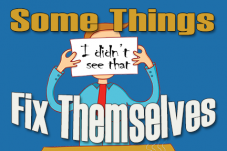 The belief that some things fix themselves, when referring to business problems, is a pipe dream.

Nevertheless, among business professionals there is the notion that some things fix themselves just by cleaning, covering up and moving on from the mess the “THING” caused.

The mindset here is that the good people working in the business will finally get the message, when seeing the messes that THINGS/ERRORS cause. Whereby, they will stop making them. At least that’s the hope.

Using this fanciful methodology, some suppose errors, non-conformance and employee miscommunications are mysteriously fixing themselves.

To be fair, some errors and non-conformance occur only occasionally. For this reason, some businesses simply clean up the mess and forget it; hoping never to see that type of error again. The adage, “out of sight, out of mind” applies here.

However, the only THINGS that fix themselves are living organisms; at least, those without life-threatening issues. Ask any microbiologist. Living organisms have finely-tuned SYSTEMS for fixing their problems, created by God Almighty!

Messes made by man need man’s ingenuity to clean up the mess, when errors and broken workflow processes occur!

The Cost of Believing Things Fix Themselves

The ones who have to clean up the mess, are those suffering the consequences and stress caused by those supposedly self-fixing “THINGS.”

For example, an upset customer, mad at the poor quality they received, may take their anger out on an employee, when the blame should land on the owner.

Sadly, some business owners refuse to acknowledge chaos caused by broken “things.” Regrettably, some owners seem to think problematic “THINGS” can be tolerated as long as the company is making a PROFIT.

This type of self-centered business owner reminds me of a former employee we had — I’ll call her “Sally.”

Sally embraced our quality-minded environment that left nothing to chance concerning workflow systems. For family reasons, Sally moved to the West Coast, taking a sales position in a well-established printing company with a large sales-staff. After working there a short time, she was disappointed that most of the print jobs she sold had some type of problem.

Sally reported her concerns many times to the production manager, to no avail. She even tried to share with him about OUR quality systems, which also fell on deaf ears.

Finally, on one such encounter, her production manager barked, “If you don’t like the way I run this plant, go tell the owner!”

So, Sally set a face-to-face meeting with the owner and laid out her quality concerns. Intending to be helpful, again she shared how good quality control systems would FIX their problems.

To her amazement, the boss took a very defensive attitude and told her, “We don’t need good systems, we just need GOOD people. And besides, it’s YOUR job, as the salesperson here, to COVER our problems with the clients!”

In fact, she told me later that this company had a special department of “good” people who would willingly take selected printed samples of a customer’s job and doctor them, by any means possible. Then they delivered these doctored samples to the customer by way of, you guessed it, the salesperson.

For that owner, a little schmoozing by the salesperson, and doctoring by his ”good” people, is the means by which some things “fix” themselves. Hmm!

Did I mention? Great systems work better for fixing things!

How to Delegate Effectively to Employees