Technology Trends from the InfoBlog
March 17, 2017

A Look at the 2017 Digital Solutions Cooperative (Dscoop) and Jetcomm

The HP Digital Solutions Cooperative (Dscoop) has been a mainstay of event calendars for Indigo users for more than a decade. Over the past few years HP has moved to include users of their other print technologies, including Scitex, DesignJet and PageWide Web Press. While in past years the HP PageWide Web Press team held their Jetcomm event in advance of Dscoop, this year the Jetcomm sessions were integrated into the main Dscoop agenda alongside tracks dedicated to Business & Leadership, Operations, Sales & Marketing, and Technology & Innovation.

Dscoop is part tradeshow and part education event, with an agenda that included A-List keynotes and mentalist Lior Suchard as emcee. The sessions were the expected array of customer success stories, successful selling solutions and product reviews, but there were also a variety of sessions covering finishing, packaging and 3D printing, all of which rank highly in KeyPoint Intelligence / InfoTrends surveys as target expansion opportunities for print service providers (PSP).

Three KeyPoint Intelligence presenters were part of the agenda. Barb Pellow, Group Director at KeyPoint Intelligence, spoke to a standing room only crowd on the keys to business success based on leading with innovation. Kate Dunn gave her popular seven step plan for sales success, and I described paths to hyper-efficient workflows to a mix of Jetcomm and Dscoop attendees.

This year represented the continuation of change led by the new Dscoop board as they work to develop more programs that operate between regional Dscoop events. Growing Dscoop events in Europe and Asia means that each region can focus on applications and solutions appropriate to their geography and feature local partners. The Dscoop leadership, with Keith Wilmot taking over as the CEO, Julian Marsh as the new global chairman, and Peter van Teesling as the COO, has also appointed dedicated regional directors for Americas, Asia-Pacific and Japan, and Europe / Middle East / Africa. 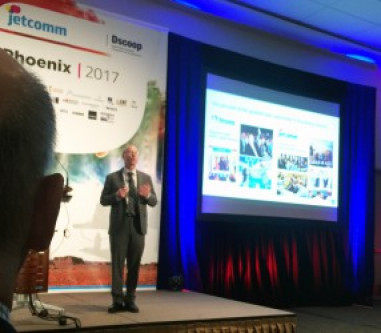 Eric Wiesner, VP and GM of the PageWide Industrial Division, shares the plan for business growth.

It was also a change for Jetcomm attendees. HP PageWide Web Press users were integrated into the first two days of the main Dscoop agenda, which meant programming to the Dscoop schedule, including breaking for the keynotes.

One of the features of Dscoop is the Technology Showcase where HP and its partners show a wide array of technology. There you could find longtime partners like Scodix, MindFire, Harris & Bruno or locr. But, there were also new partners that highlighted their own interesting technology. Edward Tsui from Shanghai-based Haiyaa (haiyaatech.com) came to his first Dscoop with the Haiyaa variable data tool for labels, tags, and packaging. His full color barcodes, .25mm microtext, and interesting security solutions made him one of the popular stops.

Also in the Technology Showcase, HP hosted the Inkspiration Awards (hpinkspiration.com) and announced winners in 17 categories spanning collateral, direct mail, folding carton, labels, and books. Winners included King Printing, which won for producing the book "US Military and Experimental Entrenching Tools" on an HP PageWide Web Press T240 so that it matched an earlier offset edition. 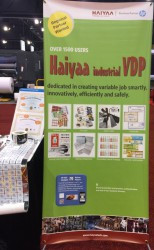 At the Haiyaa stand, visitors had the opportunity to see full-color barcodes, .25mm microtext, and interesting security solutions.

As Dscoop continues to make changes to its program, and as the number of PageWide Web Press users grows, combining the two events into a single agenda may prove more challenging in the future. Owners of PageWide and toner devices must make hard choices about where to spend their time and which events to attend in the compressed schedule, and attempts to have showcase areas for both Jetcomm and Dscoop did not seem to attract people to the Jetcomm showcase.

The next stop for Dscoop is the European event in Lyon, France, June 7-9.