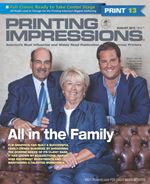 What do Jim Corliss, Jay Leno and Barack Obama all have in common? All three, in their own way, have made a substantial commitment to the future of 3D printing.

To help educate printers on how to make a successful transition, xpedx—a full-service supplier of wide-format equipment, supplies and service—increased its Wide Format Solutions Summits to 28 shows at 14 new cities this year based on the success of the five summits it held in 2012.

Knowing the branding "basics," you can create a compelling brand that your customers may or may not give a hoot about. Want to form brand impressions that last? Understand what customers really think about your brand, and learn how to properly position it in our ever-changing industry.

In a competitive environment, oftentimes it's the subtle differences that can elevate one provider over another. For FLM Graphics in Fairfield, NJ, one of its key differentiators is Access Images Analytics, which enables clients to measure the results of a campaign in real time.

The Garvey Group has acquired the wide-format printing division of Schawk Inc. The new facility will be rebranded as The Garvey Group West Large Format Facility, and will remain in Los Angeles.

The door to diversification isn't closed shut, but for printers that have hemmed and hawed during the "wait and see" era of 2008-2012 without having made any significant investments in equipment or capabilities, there is a bit of ground to make up. Take notes from a sampling of companies that have plunged into new territory.

Cleveland-based Northern Ohio Printing has blossomed into a $5 million business with 30 employees servicing more than 600 accounts. How did they do it? Founder and President Gary Chmielewski credits the company's ability to evolve during uncertain times, along with a stellar staff and capex investments.

PRINT 13, like the industry in general, will not be what it was in its heyday, but it still serves as the largest gathering of people and equipment in the Americas—making it well worth your time and money to attend.

The quadrennial PRINT show comes at a most interesting time. The printing industry is enduring some violent changes from a technology standpoint. With the decade-long trend toward shorter runs continuing; digital printing, especially inkjet, stepping up its game; and electronic alternatives continuing to harvest market share, diversification is on the lips of many shop owners as they prepare their trek to Chicago.