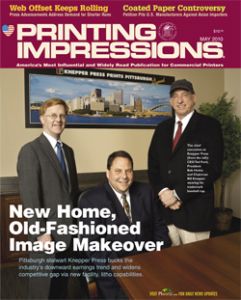 Commercial Printing News from Printing Impressions' May 2010 edition, including items on Colour 101 and F.P. Horak.

Binding and finishing news from Printing Impressions' May 2010 edition, including items on SPG Graphics and Menasha Packaging.

Brown Printing announced that it has reached a five-year agreement with Hearst Magazines to produce and distribute five of the publisher's magazine titles: Food Network Magazine Esquire, Marie Claire, Popular Mechanics and Town&Country.

Bob Hreha, Knepper Press president, has had to correct many misconceptions regarding the product and service  offerings of the commercial printer.

FedEx Office will deploy more than 12,000 new Canon and HP machines across more than 1,800 locations in the United States and Canada.

Green printing-environmental news from Printing Impressions May 2010 edition, including items on FetterGroup, SFI and LEED.

Hey, Spring Break is Over —DeWese

You're sitting in a classroom on the beautiful campus at Mañana University (MU) where you will be studying to earn your PhD in the sale of print communications and related services.

Can we expect to see more of the same merger activity as 2010 marches on? Judging by the reaction of some veteran observers, the answers, respectively, are "no" and "maybe."

Last September, a petition was filed charging Indonesia and China with illegal subsidies and dumping during 2008 and 2009, which subsequently caused "material injury" to the U.S. paper industry.

Lon Martinsen, an employee of Grafix Screen Printing, has regained movement in his fingers.

The system essentially allows mailers to print high-resolution graphics and messages in color or black on the outside of the envelope.

ALBERT GEHLY, in his mid-70s, and his wife were just beginning  to savor the fruits of their hard labor. After founding Bellow Falls, VT-based Vermont Graphics in 1973, the "snow birds" were enjoying his semi-retirement by escaping the cold Vermont winters at their second home in Florida.

This Life of Reilly Is a Nightmare —Cagle

BACK IN March, I blogged on the subject of a printing industry brother who has been repeatedly visited by personal devastation. His tale is heart-wrenching, so in case you haven't seen it...

Web Offset: Still on a Roll?

How do we gauge the state of web offset printing in relation to where it is heading, when factoring in change variables such as digital printing and shorter run lengths?

The way to reach the minds and hearts of marketers is to present them with proactive solutions to the problems they face every day.