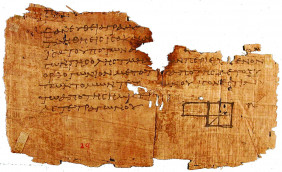 Papyrus was a precursor to paper.

Think that the times we live in are different from anything the world has known in the past? Think again. We may have the printing press, the internet, and indoor plumbing, but human nature remains unchanged.

In the year 267 A.D., two high-school-age wrestlers, Nicantinous and Demetrius, made it to the finals of the 138th Great Antinoeia regional games in Antinopolis, Egypt, where they were set to face each other in a match to determine the championship in their age group.

It looked like good ol’ fashioned teenage sports, but something was rotten in Denmark, er, rather in Egypt.

It seems that the championship match was fixed. Demetrius, in exchange for the modest sum of 3,800 drachmas, had agreed to throw the match.

How do we know? Demetrius, showing remarkable perspicacity for such a young man, got the promise of the bribe in writing. That written contract eventually made it into a garbage heap near El-Bahnasa, Egypt, where it became part of the Oxyrhynchus Papyrus, one of the greatest archaeological finds of all time.

In 1897, two amateur archeologists, Bernard Grenfell and Arthur Hunt, began digging at Oxyrhynchus after they heard that local residents were pulling scraps of Greek manuscript out of the ground. Grenfell and Hunt spent the next decade excavating more than half a million individual scraps of papyrus. Excavation continues to this day.

In addition to the above-mentioned wrestling match fix, a prescription for hemorrhoid medication, and grocery lists, the Oxyrhynchus Papyrus includes a mind-boggling amount of historical, religious, and literary material. Writings of Homer, Plato, Euclid, Menander, Pindar, and Sappho have been discovered. Ichneutae, a play by Sophocles previously lost, was rediscovered at Oxyrhynchus. Many, many fragments of religious writings from the Old and New Testaments and the Apocrypha have been found and translated.

This cultural treasure trove is so vast that only about 2% of the pieces have been translated, despite steady work over the past century! Do you have some spare time? You are invited to assist in the translation at the Ancient Lives website (ancientlives.org). Though the Oxyrhynchus portion is currently under revision, you can see how you can help translate documents from antiquity even if you don’t have any knowledge of ancient languages.

The moral of the story? Well, for starters, if you are going to throw a wrestling match, destroy the contract once you get the payoff! Beyond that, I think there are more important lessons.

Paper is great. In last month’s Johnson’s “World History Goes Paperless” column, I wrote extensively about the ephemeral nature of digital records versus the permanence of paper. The Oxyrhynchus Papyrus proves my case.

I’ve written many times that print on paper is a premium item. Cloud storage of digital documents is extremely cheap, and often free. If your clients’ information is of high value, it deserves to be printed. This doesn’t just apply to business items. That biography of grandma that your aunt painstakingly recorded before she died? Print it! Otherwise, it will likely be lost to posterity.

Papyrus is better. No, I’m not suggesting that you eschew wood pulp in favor of the pith of the papyrus plant. What I’m suggesting instead is that you upsell clients to better quality, archival grade papers. Unlike vellum or parchment (exotic and expensive writing surfaces made from animal skins), papyrus was a plant product, a precursor of paper that was affordable to the masses and therefore commonly used.

Today’s equivalents are cotton-content and acid-free papers. It is worthy of note that in the case of on-demand printing (such as would probably be employed to print grandma’s biography), quantities are low and the incremental increase in paper cost is negligible, yet the value added is great.

Today’s wide range of synthetic stocks are also an option.

As a professional and an expert in the art of ink on paper, I suggest that it is up to you to aid in preserving our culture for future generations, and that you’ll turn a greater profit by doing so. Digital has a role to play in preservation but, in the long run, only print will last into future millennia