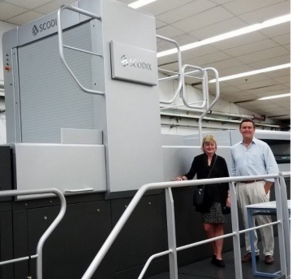 CHATTANOOGA, Tenn. - September 7, 2018 - Scodix announced the sale of the first E106 system in North America to TPC Printing & Packaging. The installation is planned for November 2018, replacing the UltraPro with Foil TPC Packaging installed in May 2017.

TPC Packaging produces a wide range of high-end custom folding cartons and promotional packaging for customers primarily in the cosmetics, fragrance, spirits and health & beauty markets. They installed the UltraPro to expand the range of effects they could offer their discerning clientele. And it was immediately popular. In fact, the piece TPC Packaging created for the open house event that introduced the new capabilities - titled “Rise & Shine” - to showcase the full range of effects won a national Benny award, as well as a regional Printing Industry Association of the South (PIAS) Best of Show award.

“It was an introductory promotional piece, and it really helped us kick off this technology, and communicate the new capabilities properly with our existing as well as target customers,” said Joseph A. Schmissrauter III, President, TPC Packaging.

However, Schmissrauter noted that within a year, they quickly realized that client demand necessitated an even larger and faster system, now that clients understood the impact of Scodix enhancements. The original purchase agreement allowed for an upgrade once the E106 became commercially available, and after a visit to the Scodix facilities in Tel Aviv this past summer, they made the decision to authorize the switch.

“We were really drawn to the larger format of the E106,” said Schmissrauter, “and it offers more than twice the production speeds of the UltraPro. All 10 of our top accounts - which make up the bulk of our revenue - have already been introduced to the technology through the UltraPro, but they have been limited in what they can do because of the size and speed restrictions. They are very excited to get started with this machine.”

In addition to running jobs with special effects that can’t be easily or cost-effectively created on traditional equipment, TPC Packaging also plans to transition all of its short-run foil work to the E106, which it anticipates will significantly cut down on the costs to produce those jobs. “That will automatically feed business into the E106,” said Schmissrauter. “We should have a sizeable amount of machine hours already booked on day one, when the press hits the floor. And we anticipate some larger programs coming in that will utilize the unique combinations we can produce on the E106 shortly after that.”

In fact, by next year he estimates that a quarter of the work that will be run on the E106 will be traditional capacity pulled from other equipment, while the rest will be business that is specifically designed to take advantage of all that the E106 has to offer.

In addition to the size and speed advantages, the lack of setup required, no dies needed and quick change over between jobs are all elements of the E106 that TPC Packaging will immediately benefit from. “The driving force behind this purchase is that TPC Packaging wants to continue to be recognized as the leader in innovative packaging in North America,” said Schmissrauter. “We want to serve our high-end clients better, and we believe this equipment will help us do just that.”

“We are excited to have TPC Packaging be the first installation of the E106 in North America,” said Mark Nixon, Scodix VP of Sales and GM, North America. “We believe the E106 will not only help TPC Packaging create their current jobs faster and more cost effectively, we also believe it will allow them to branch out to things such as short-run and versioned foils, including regional or even store-specific versions. The UltraPro let them get their foot in the door with this technology; the E106 is going to allow them to take that to even higher production levels, and truly secure their place as the leaders in their marketplace.”