The Target Report: What’s in a Letter? Monotype Acquired by Private Equity Firm

After rolling up the business of selling fonts, Monotype Imaging has announced that it is exiting the public market, accepting an offer from private equity firm HGGC. This highly profitable business reached the end of one road, veered off to the side, and is now being acquired as it struggles to find a new pathway forward.

This is not a story of a distressed company, far from it. Rather, Monotype has been so successful in the consolidation of the font licensing business that the company has run out of significant acquisitions in its chosen market segment. Without a clear path to achieve future growth, the public markets have been punishing the stock price. Company management decided that it was time to sell, apparently before the company value declined even more. After Monotype ran a failed sale process in 2018 which saw 28 prospective buyers walk away without any definitive offers, HGGC emerged recently with an offer of $825 million in cash. Based on trailing twelve-month revenues of $244 million, the purchase price is 3.4 times revenues and 15.1 times the EBITDA of $54.5 million for the same period. Gross profit has been reported hovering around 85% of revenues, most of which are recurring and predictable, which explains the relatively high enterprise value (viewed from the perspective of those of us in the printing industry).

By 2015, having completed a long string of font-related acquisitions, Monotype had to look elsewhere for its next act. The company first acquired Swyft Media, a start-up providing mobile advertising and messaging apps. In a further drift away from the core business of licensing fonts, in 2016 Monotype acquired Olapic, which provides marketing automation software to capture and deploy user-generated visual content for social media and promotion. Olapic is not in the “steady as she goes” business of licensing fonts; the acquisition puts Monotype smack dab in the middle of the super-hot and rapidly developing business of marketing automation software. While this may prove out to be a prescient strategic move in the long run, Monotype laid off 80 Olapic employees when results fell short of expectations during the first year, and in the first quarter of 2019, the company reported a decline in the performance of the Olapic business unit.

This is not the first time that Monotype has regrouped and found a new way forward, nor will this be the first time the company is under private equity ownership. Indeed, this company is no stranger to technological disruption; the current Monotype company is the successor to the company that invented and manufactured one of the original technological disrupters, the Monotype hot metal caster. Along with the Linotype typesetter, these machines completely upended the laborious business of setting type by hand and paved the way for the tremendous growth in newspaper and book publishing. From its founding in 1887 to the 1960s when phototypesetting was developed, the Monotype machine was considered the higher quality of the hot metal machines since each letter was separately cast and the typesetter could make minor changes in spacing or fix a misspelling by replacing a single incorrect letter. By contrast, the competing Linotype machine cast a complete line of type in one metal bar (or line), which was more compatible with rapid turnaround applications such as newspapers. 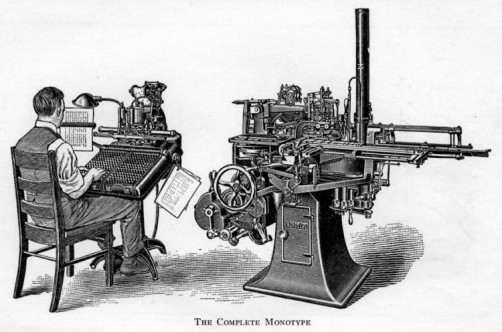 The erosion in the hot metal typesetting business was complete by 1992 when photo typography systems and desktop publishing software achieved absolute dominance. Failing to convert quickly enough to the new technology, Monotype filed for Administrative Receivership in the UK. After a series of owners and rebranding efforts, the company eventually was acquired by phototypesetting pioneer Compugraphic, by then a division of Agfa. Six years later, in 2004, Agfa divested the typesetting division, selling Monotype to private equity firm TA Associates. Resurrecting the Monotype name, TA Associates launched an aggressive roll-up strategy by acquiring Linotype, Monotype’s rival for more than a hundred years, by then a division of press manufacturer Heidelberg. Monotype returned to the public markets in 2007 and began to aggressively acquire other font companies, including font provider Ascender in 2010, digital font retailer Bitstream in 2012 (which included the online font seller MyFonts.com) and finally the last large independent digital font retailer FontShop in 2014.

From their early days, Monotype and Linotype did not just build machines, they also commissioned great designers to design fonts. Commissioned typefaces, many of which are ubiquitous today, included Gill Sans, Times New Roman, and Old Style Goudy. Several more classic fonts came along with the Linotype acquisition, including Helvetica, Frutiger, and Optima. The ownership of these commissioned fonts, originally a value-added side product to the primary business of manufacturing machines, paved the way for Monotype’s eventual rebirth as a font licensing company.

DG3 Group, the diversified printing and graphic services company headquartered in Jersey City, New Jersey, announced another acquisition in the UK. The acquired company, Newnorth Print Limited, will be consolidated into the existing two locations in the UK. With a core competency and origins in the financial printing segment, DG3 has focused on serving the financial centers of New York, London, and Hong Kong, with support services in the Philippines. The company has been owned by Resilience Capital Partners since 2016 when it acquired DG3 from Arsenal Capital Partners (See The Target Report: Private Equity Participates in Printing Industry Consolidation).

Ennis, the publicly traded serial acquirer of trade-only printing companies, acquired The Flesh Company based in Fenton, Missouri. Included in the deal is subsidiary Impressions Direct which is focused solely on direct mail printing and services. Collectively, the two acquired companies had approximately $31 million in sales for their most recent fiscal year. In addition to the direct mail products, the acquired company provides business forms, checks, and labels, sold mostly through print distributors and resellers.

PrintStar, a commercial printing company located in San Diego, California acquired the printing business of Sorrento Mesa Printing, also of San Diego. The former owner of Sorrento Mesa is launching a new company focused on branding and promotional services. Suolo Communications, based in Minneapolis, Minnesota has acquired Commers Printing in Blaine, Minnesota. Suolo Communications was formerly known as RJM Printing and outgrew the printing-centric moniker. In 2016, the company rebranded with the Suolo name, billing itself as a “creative production agency” offering creative services, printing, signage, and technical communications.

Coloredge, based in New York City, announced that it is merging with Primary Color Systems which is based in Cypress, California. Both companies offer high-end creative and display printing services for national brands primarily in the fashion, consumer goods and events marketing segments. Services at both companies include extensive prepress, retouching and package design, in addition to wide and grand format printing, structural design, and installation. The merger is clearly intended to position the combined company as a national player, with additional locations in California, New Jersey, Atlanta, Georgia and two in China. We expect that this merger, which we see as similar to the Orora Visual roll-up, sets the stage for more national roll-ups in the wide and grand format segments. 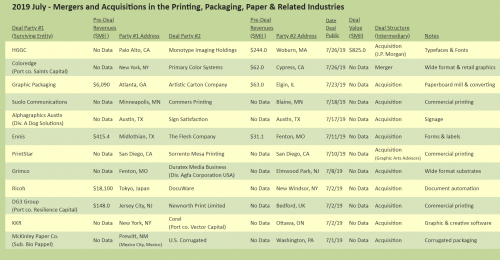 Click here for the online version of The Target Report July 2019 for the complete deal logs with additional information and links to sources.