ICV Partners acquired Wheeling, Ill.-based SG360°, following on the heels of its 2014 purchase of OneTouchPoint in Hartland, Wis., which had been owned by Huron Capital Partners. Oak Hill Capital Partners bought Minneapolis-based Imagine! Print Solutions, which then purchased marketing firm Midnight Oil Agency of Burbank, Calif. DG3 Diversified Global Graphics in Jersey City, N.J., is snapped up by Resilience Capital Partners. These were just some of the more high-profile acquisitions of larger printing companies by private equity firms that took place in 2016.

“Financial buyers are once again interested in printing and packaging [companies],” notes Peter Schaefer, a partner at industry M&A leader New Direction Partners during a “Year-end Recap and Mega Trends in the Printing and Packaging M&A Market” webinar that he co-hosted with fellow New Direction partner Paul Reilly last month.

Whether a private equity investment, a strategic merger or acquisition, or even a tuck-in deal just to acquire a printer’s book of business, M&A activity in the graphic arts industry remains strong for both sellers and buyers. “Because it’s such a healthy M&A market, and because it’s easier to grow through acquisition than it is to grow organically, the takeaway is that every owner ought to be a buyer or seller today,” Schaefer adds.

And for the first time in years, it’s even a better time to be a seller than it is a buyer, according to the industry M&A veteran. The reasons: a healthy U.S. economy, a printing industry that’s performing well as a whole, interest rates that remain at historic lows, the fact that banks are lending again and an upward trend for sales multiples.

In fact, depending on an acquired company’s product specialty(ies), annual revenues and overall financial health, multiples have been ranging from 3.5x EBITDA [Earnings Before Interest, Taxes and Amortization] on the low end of the range for a commercial printing operation to 7x for packaging establishments serving high-growth segments such as flexible packaging.

Mark Hahn, principal with fellow industry M&A advisory service Graphic Arts Advisors, agrees overall that the market remains a seller’s one. Label and flexible packaging printers/converters remain the hot markets from a demand standpoint. And the corrugated market is also heating up, Hahn points out, thanks in part to the growth of the online shopping and subsequent package delivery market, as well as the demand for printed retail displays in stores and malls, which are often constructed of corrugated.

Tuck-ins also continue to drive industry consolidation, especially for smaller firms, in what remains a fragmented industry. “The driver we’re typically seeing for tuck-ins now is owners reaching retirement age versus owners being in distress situations. That’s a big difference from four to five years ago.” In most cases, Hahn notes, these business owners are seeking an exit strategy — either they don’t have any heirs or, if they do, their children are already committed to pursuing careers outside the printing industry.

Hahn says these types of tuck-in transactions are typically consummated primarily to provide the buyer with a book of business, select equipment and, in some cases now, he’s seeing that the buyer is also seeking qualified production personnel, which Hahn observes as being a somewhat newer phenomenon. 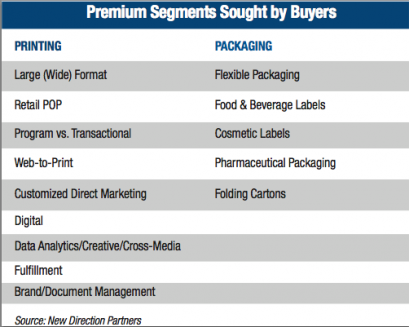 Reilly, of New Direction Partners, notes that the benefits of a tuck-in for a seller includes royalty rates that make it more attractive than an outright liquidation; the chance to sell what has the most value — clients; the ability to be compensated, even with operating losses; and the fact that sellers can get a higher price when sales return to normal levels. On the risk side is the fact that the seller is paid over time, coupled with the reality that the buyer could go out of business.

And, although 2017 appears to be another good year for those looking to sell their businesses, Schaefer cautions that it remains difficult to predict when the U.S. economy will face another recession. In fact, he points to a Printing Industries of America special report that shows, on average, since 1948 the most risky year for a recession is the second year after a presidential election [in this case, 2018]. Although Donald Trump’s election seems to be breaking all of the incoming presidential playbooks thus far, history does tend to repeat itself.

So, with EBITDA multiples holding steady, holding out for a bigger number is not realistic for sellers, especially given the risk of a downturn. And savvy buyers realize that a well-timed acquisition is the fastest way to reach the next level with new customer bases and the ability to enter more profitable verticals.