The benefits of high-quality digital embellishment technologies were the primary focus of a press conference held by Scodix (Booth N2521). The company’s technologies, said Mark Nixon, VP of sales and marketing for Scodix, have been strongly bolstered with the inclusion of the new Scodix Ultra 600 Press. He stressed the transformative capabilities of digital embellishment, as compared to an analog process, where a more complicated foiling effect means more hours setting up the job. “From a design point of view,” he said, “there is no limit on what can be done. We urge people, ‘Make it complicated.’”

The Scodix Ultra 6000 Press, Nixon said, carefully evaluates the print area to determine single or double drop sizes. This enables the press to produce beautiful, embellished type as small as four points, as well as large spaces. The technology, he says, shortens embellishment set-up times from as long as two days, down to two minutes. The process, he says, is simple: Upload the file, set up the job, and produce.

First Purchase of the New Press

The Scodix event featured Donald Droppo Jr., CEO of Curtis Packaging, whose company has acquired the world’s first Scodix Ultra 6000 press. Curtis Packaging is a luxury packaging company focused on cosmetics, health and beauty, spirits, chocolate, and other segments. Droppo’s enthusiasm for the press was palpable: “I just can’t get over the versatility side of it,” he said, “and the make-ready time is in minutes.” While Curtis Packaging prints with offset lithography, its embellishment has gone digital. Droppo said selling digital embellishment is a trifecta, noting it starts “with how beautiful it is.” 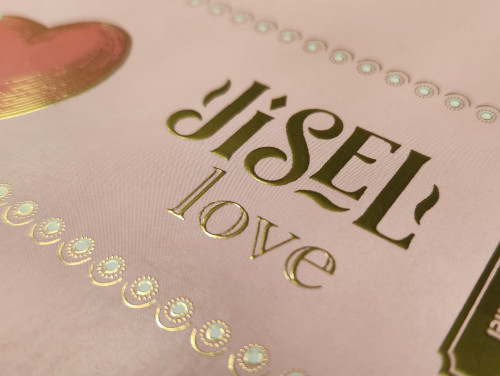 Excellent detail, along with foiling, glitter, and other effects, are key features of digital embellishment.

During the event, Nixon highlighted the environmental benefits of digital embellishment. The fully digital process, he said, eliminates the negative environmental effects of traditional foiling technologies. Further, he said, the technology assists brands in reaching their own sustainability goals. “It is clean, safe technology,” said the narrator of a brief, environmentally focused video produced by Scodix. “Our promise is to embellish responsibly,” the narrator said.