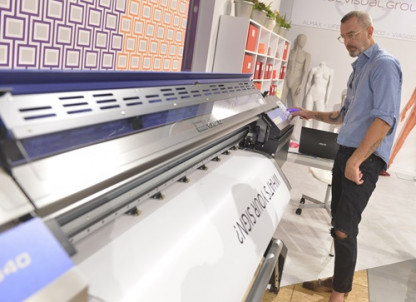 IRVINE, Calif. — January 30, 2017 — The first season of the new GSN series “Window Warriors” — a new skill-based competition TV series combining art and commerce — concluded recently, with the winner, Timothy Howe, walking away with the $100,000 grand prize. Throughout the season, the eight designer contestants competing on the show relied in part on Roland’s advanced wide-format printers and vinyl cutters to create their elaborate retail window displays.

Roland products were integral in assisting each of the “Window Warriors” contestants — all talented retail window designers — with their challenges to design and produce highly creative, eye-catching window displays.

The show’s contestants were given three days to finish their window displays for each episode, along with access to a “work room” containing the various devices and materials needed to complete each of the projects. Roland DGA supplied two of its innovative wide-format digital inkjets – a VersaUV LEJ-640 hybrid UV printer and a SOLJET Pro-4 XR-640 eco-solvent printer/cutter – as well as a CAMM-1 GX-640 vinyl cutter, for show contestants to use throughout the season. The designers used these advanced Roland machines to produce stunning backdrops and other detailed graphics for their retail displays.

Jill Goularte, an executive producer of Window Warriors, was extremely pleased with the show’s first season. “It was a tremendous success, and Roland played an important role in that,” said Goularte. “The cast couldn’t wait to get their hands on the printers.”

“Window Warriors” was produced for GSN by Michael Levitt Productions, the team behind the network’s most watched original series ever, “Skin Wars.”

Is the New Wide-Format Summit a Good Fit for You?