Printing's Magical Kingdom: A Preview of What to Expect at Graph Expo 2016 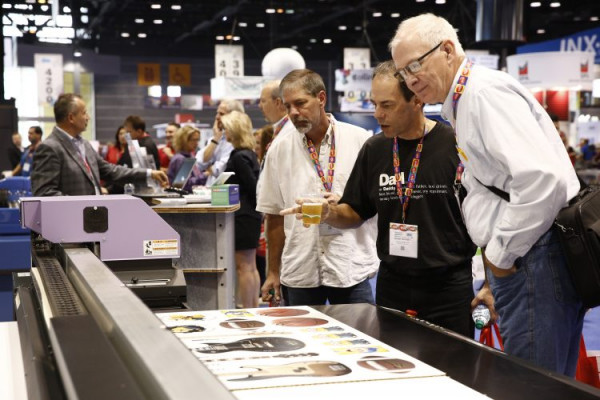 The chance to watch equipment in action has always been one of the biggest selling points for attending Graph Expo. 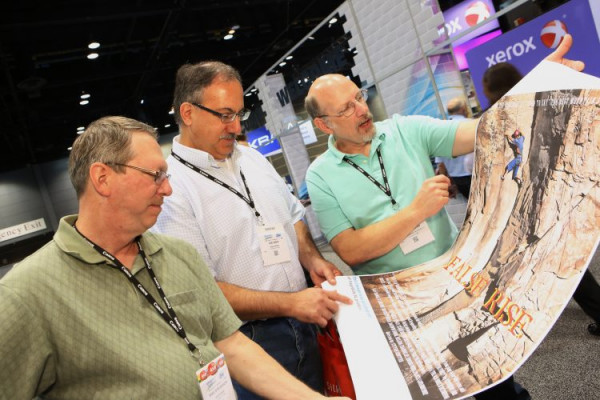 The proof is in the pudding when it comes to inspecting printed samples coming off output devices.

Ever notice how the slightest changes to your little corner of the world can make a significant difference? Whether it’s a fresh coat of paint or rearranging the living room furniture, the changes can significantly alter your outlook. That certainly holds true for Graph Expo 16.

The annual printing industry superfest takes place in the North Hall of the Orange County Convention Center in Orlando, Fla., from Sept. 25-28, making it the first time in more than 20 years that Chicago has not hosted the event. Both New York City and Philadelphia hosted Graph Expo in the early 1990s.

The new look works on many levels. Clearly, with many exhibitors having accrued tremendous expense in exhibiting at drupa 2016 only three months earlier, some vendors no doubt welcomed a respite from the steep price of doing business at McCormick Place in Chicago. Flights to Florida, from an attendee standpoint, are also relatively cheap. And why not bring the wife and kiddies along … apparently, there’s a family-friendly attraction in the city of Orlando. Try Googling it.

The architect at the center of the trade show is a fresh face as well. Earlier this year, Thayer Long was named president of NPES-The Association for Suppliers of Printing, Publishing and Converting Technologies; he was also given the keys to the Graphic Arts Show Co. (GASC), Graph Expo’s parent. Long may be new to the printing industry, but he’s a grizzled industry association maven, having spent nearly 20 years at the helms of the Independent Electrical Contractors and the Manufactured Housing Institute.

Long, for one, is extremely excited about joining the printing industry, which he feels faces many of the same challenges as his previous industries. “The issues that this industry is going through are very much the same for every other industry that I’ve been associated with,” Long notes. “All of them are changing and evolving. When I was in the electrical contracting world, they were asking themselves the same questions: ‘How, as contractors, do we maintain relevancy?’ ‘With all the technology and innovation, how do we change and evolve?’”

Even though Graph Expo 16 isn’t centrally located from a geographical standpoint — as it would be in Chicago — Long expects the show to enjoy a strong Southeast regional draw. He anticipates the “drupa effect” to be minimal, given that the global show in Düsseldorf, Germany, tends not to draw strongly in the United States [unofficial results tag the percentage at less than 3% of overall attendees].

The overarching goal, in Long’s view, is to provide an experience for attendees that can help them drive business, increase sales and profitability, reduce costs and improve efficiencies, adapt to new technology and perhaps incorporate new lines of business. Those are the reasons to visit the Land of Mickey come September.

As for new wrinkles, Long didn’t want to tip his hand too much. However, he is particularly excited about a new floor feature called The House That Print Built. The “house” incorporates a myriad of new and popular printing applications — providing everything from window coverings to wallpaper and flooring — and makes use of printed electronics and 3D printing.

“We want to ensure that Graph Expo attendees have a uniquely rich experience in Orlando,” Long says. “We want to make sure our attendees walk away with real tools they can take home and apply to their businesses.”

The subtle benefits offered in attending Graph Expo can be, at times, overlooked. Networking is one of the intangibles that is hard to put a value on, notes Marco Boer, VP of consulting firm IT Strategies. While vendor open houses provide a great opportunity to get hands-on, in-depth experience, it is time-consuming and often impractical to visit more than a couple of vendor open houses per year. Boer points out that printers cannot easily compare and contrast by visiting one vendor at a time.

The Social Networking
“The ability to meet peers in a short period of time is underrated,” he says. “And regardless of whether it’s through a formal educational setting or bumping into someone who gives you an idea you’ve never thought of … it’s a great opportunity for printers.”

But what trends can Graph Expo showgoers expect to see on display this fall? Boer, an inkjet aficionado, is excited by the macro trends that will be evident throughout the Orange County Convention Center, namely the claimed ability of production inkjet machines to print on glossy, offset coated paper stocks. Some of the excitement stems from inkjet’s ever-improving quality performance, which is quickly approaching HP Indigo-type quality levels, he says.

“The reason why inkjet is so much more productive than digital toner technology is because there’s very little limitation, by comparison, on width and linear throughput speed: just add more printheads, more nozzles,” he says. “And, assuming you can dry the ink at sufficient rates, we’re going to get offset speeds and near offset quality with inkjet. We’re not there yet, but we’re heading in that direction.

“That’s the most exciting thing; this journey is coming fast, and the development cycle is happening faster than you might think. Fast forward to Graph Expo 2020, and we’re going to be stunned by the level of print quality that people will generate off of their high-speed inkjet systems.”

One of the less-heralded but nonetheless compelling storylines at this year’s show is the value proposition offered by light production toner machines. Some of those models that fall in the $70,000 to $200,000 range enjoy quality that rivals some of the high-end digital color presses, Boer notes. Buoyed by accoutrements such as a fifth color for white toner or varnish, these machines provide plenty of bang for the buck.

“Many printers dismiss these kinds of devices because they look like copiers,” Boer observes. “But they’re wrong about that. We’ve come such a long way. If you look, as a proof point, at the revenues that hardware vendors make from selling production digital color presses versus light production copiers … they’re not that far apart. They may even be bigger in some cases than digital color presses in terms of what people are spending on them. Basically, high quality at production level is within reach.”

Like Long and Boer, John Zarwan, managing partner of J Zarwan Partners in Charlottetown, Prince Edward Island, Canada, sees tremendous value in networking at Graph Expo 16. Additionally, he says, printers looking for a wider variety of equipment and software can appreciate the multitude of selections offered.

“But I do think it will be a smaller show this year,” Zarwan notes. “For a lot of printers, Chicago was an easy day trip. This kind of reminds me of the early 1990s, when Graph was in Philly and New York City. Given that printers who were looking for something substantive probably went to drupa, I think the Orlando show will be closer to that.”

Zarwan also believes Graph Expo 16 will provide a platform for certain technology providers — companies that he feels offer truly compelling products, such as MGI and Scodix — to make a big splash. Companies that are in the process of becoming reconfigured, such as Xerox, will be interesting to watch, he notes.

Technology on Parade
Jim Hamilton, group director at InfoTrends, isn’t quite sure what to make of this year’s Graph Expo event, given the relocation and the drupa factor. He assumes the increase in attendees from the South and Latin America may help make up for those printers lost from the Midwest region.

While he doesn’t see Graph Expo as being rich in new product news — an honor bestowed upon those who made the pilgrimage to drupa — it will provide the opportunity to see some of those technologies that grabbed headlines in Germany. Besides, he adds, you can’t rule out acquisition news that arises around that time frame. After all, Kodak’s Enterprise Inkjet division is up for sale.

“A lot happens in a drupa year with technology demonstrations, partnerships and new product announcements,” he says. “Yet only a relatively small number of North Americans are able to attend drupa. This is why Graph Expo is particularly important this year as an opportunity to catch up on the whirlwind of drupa announcements and to see which ones will be ready for prime time in September.” PI

Making it with Print: Paying it Forward