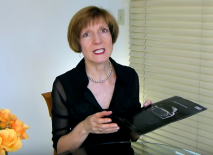 Car tail lights haven’t changed all that much over the last 50 years. So when Audi came up with a fun way to transform the lights on the back of their latest A8 sedan into a magical, animated light show using organic light emitting diodes (OLEDs), they wanted to put this fact in front of an audience that enjoys the finer things in life, all in a fun, unique way.

The solution? A stylish print-magazine insert that, upon opening, recreates the symphony of lights emitted by the vehicle it was designed to promote.

“One giant leap for machine kind,” trumpets the copy on the front of the advertising supplement, floating above an image of the vehicle’s front. Opening the piece reveals a super-moody photo of the car from behind, its tail lights instantly animated in a near-perfect recreation of the A8’s own idiosyncratic luminescence. To get it to light up again, simply close the brochure and open it once more ... or do it the cool way: Click the key fob that accompanies the piece!

This is probably a good time to point out that Departures magazine is published exclusively for American Express Platinum Card Members, a sophisticated audience who can easily see themselves behind the wheel of a $90,000-plus Audi A8, so long as it promises a unique, stylish experience.

To make this advertising supplement possible, Structural Graphics assembled an enormous number of LEDs and, lining them up with the car’s tail lights, sandwiched them between two printed sheets of Invercote Creato paper. They also produced the remote control “key fob,” a convincing imitation of such gadgets – printed on 120 lb. Sappi McCoy Gloss Cover paper – which readers can use to retrigger the lighting sequence at will. (The company even designed the box the fob comes in.)

The insert effectively captures the A8’s signature light show with one of its own that’s every bit as groundbreaking. The addition of the faux key fob is a clever touch, the designers surmising (correctly, I think) that there’s greater “look at this” value in triggering the lights by remote control rather than by simply opening and shutting the advertisement repeatedly.

Like the dimensional piece Structural Graphics created to promote the Toyota Camry last year, this is something that’s designed to be shown off in a variety of situations – the print equivalent of a meme, only way cooler.

At a time when every online miracle looks like every other online miracle, it is interactive print experiments such as this that soon might mean the difference between leading in your industry...or merely watching the tail lights of those who do.