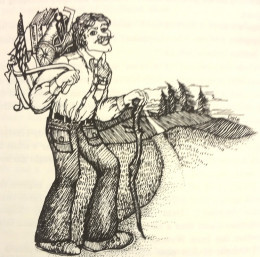 Here’s the next installment in our continuing series of republished “Otto’s Night Watch” columns written by Otto Boutin, which appeared monthly several decades ago in Printing Impressions. In this week's short story, Linotype operator Otto Boutin recounts a consummate  "tramp printer" named Alex, who disdained the thought of being trapped in a steady job, completing the same work tasks over and over again. And, even after Alex ended up on a distant island paradise — holed up in a luxurious hut with the chief's most beautiful daughter — the daily grind of printing 'ALEX THE GREAT' on the sarongs of island women became more than he could handle. Perhaps this week's column about a man's desire for freedom and independence is somewhat apropos as a lead-in to the upcoming 4th of July holiday weekend.

Some Call It Freedom

Nowadays, with everybody so busy, busy, busy, it’s almost a crime to be unemployed. Every man is rushing to a sunlit job in the morning and a moonlit job at night. But he isn’t getting any richer because the world is in a conspiracy to separate him from his money.

Back in the depression, when a man had no clock to punch, he felt more free to hop a freight and see the world. He told his relatives he might find a job in Timbuctoo and they told him to go ahead.

Even in those days I was somewhat of a specialist, knowing really nothing except the positions of 90 Linotype keys. Away from the machine, I was helpless. Consequently, I developed a profound respect for the non-specialists of the open road. In hobo jungles, in the middle of nowhere, they managed to put together a pot of Mulligan stew.

Under a viaduct in central Illinois I met a square-jawed, red-headed young fellow named Alexander, who always carried a book in his hip pocket. He finished “Thus Spoke Zarathustra” in Moline and, before crossing the Mississippi, he picked up a second-hand copy of Walt Whitman’s “Leaves of Grass.”

Alexander was reading the book as we sat on a bench in Fejervary Park Zoo in Davenport. I was watching a monkey on Monkey Island and the monkey was watching me, scratching his head as if he wondered whether evolution was going up or down. When he reached his decision, he tossed me a peanut.

“Lucky monkeys,” I muttered out loud. “They’ve got a full belly and a place to sleep.”

Alexander looked at me disdainfully.

“And iron bars around them. That’s not for me.”

Putting down his book, he told me that he had been on the go for six years already because he didn’t want to be with his father, who considered him a failure.

“My old man named me Alexander because he wanted me to conquer the world. In other words, to help him build a printing empire in Ohio. I’ve tried my hand at every job in the print shop. But I can’t stand the routine. I’ve got to keep moving.”

“You’ve got to settle down eventually.” I told him. “And learn to do one thing well. You can’t be running away forever.”

He glared at me scornfully. “Who the hell’s running away? Not me. I’m walking forward to meet life face to face. It’s guys like you who are running away from reality. In every town along the road you’ve been asking for the privilege of crawling into some stinking corner to operate a Linotype. You want to find some steady job so you could keep digging deeper and deeper into a rut. Till you can’t see the daylight. You’ll be trapped worse than those monkeys.”

“Where do we go from here?” I asked, abruptly changing the subject.

“Do we need a destination?” said Alexander. “Can’t we just keep going and see what happens? The world’s full of surprises no matter where we go.”

When we stopped at a farm to do odd jobs for a meal, Alexander surprised me with his versatility. He could swing an axe, hitch a horse, change the spark plugs on a tractor, and tell the difference between spinach and a weed. As a specialized Linotyper, I couldn’t even milk a cow.

In the Sacramento Valley, where I found a steady Linotype job, Alexander put in a few days in an ad alley. For a while he was interested in the vineyards in the area and taught me how to make muscatel.

Then he took off towards the west, impatient to explore the lands beyond the Pacific. For a few months the post cards came quite frequently from places like Hong Kong, Saigon, Singapore … and then a card from Macassar … and much later another one from Wowoni Island … and then silence.

I thought of him now and then, when I’d be running a Linotype through the lonely hours of the night. I wondered if he was still walking the hungry road of freedom, or if he had settled down, at the end of his rainbow, feeding a press for three meals a day.

And then early in 1944, I saw this item in the Pacific edition of the Stars and Stripes:

“When the Marines landed of the tiny island of Sanana in the Molucca Sea they were amused to find that many of the native women wore sarongs imprinted with the words ‘ALEX THE GREAT.’ 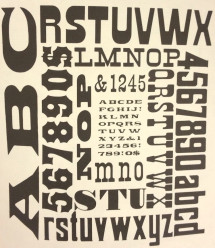 “Old Chief Molumba explained that a few years before the war a red-headed young man named Alex had come to the island on a little boat. He brought with him many secrets of civilization, especially pertaining to agriculture. He introduced new crops, such as sweet corn and watermelon, from seeds he carried in a small leather pouch. His skill as a carpenter was amazing to the natives. To keep him on the island, Old Chief Molumba gave him a luxurious hut and his most beautiful daughter. Alex became Prince of the Island, living the life that every man dreams of living.

“In his spare time Alex carved letters of the alphabet out of mahogany and made a crude printing press out of two slabs of wood. He printed on cloth with inks made of plants, minerals, squids and octopi. One of the first things he printed was the sign ‘ALEX THE GREAT’ in two-inch letters. The princess, unable to read, was so intrigued by the design of the letters that she insisted that he imprint her sarong. Soon all the women of the island wanted their sarongs to bear the words ‘ALEX THE GREAT’ in many different colors.

“Alex became a very busy man at his printing press, sometimes working late into the night. And then, one day, saying he was tired of it all, Alex got into his outrigger and said he was going fishing. He never came back.”