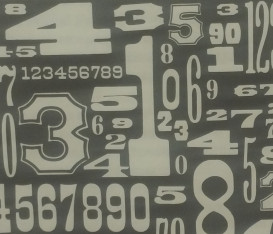 Here’s the next installment in our continuing series of republished “Otto’s Night Watch” columns written by Otto Boutin, which appeared monthly several decades ago in Printing Impressions. Similar to several of his past short stories, this one also harkens to the old days of "tramp printers" who traveled the country in search of adventure. They often made short stops along their journeys to refuel by operating a letterpress or a Linotype machine at a local print shop, just long enough until they felt the urge to move on again.

Reading Is Believing, Too

Casey was glad that he had finally found a home. It was only a single room, but it was his. He had a bed with linens and a little refrigerator with a steak in it. He had some cans of soup on a shelf and a pot of coffee on a small gas stove. He had a home. He even had a second-hand television set.

He had blundered into the shop a few months ago, when he got stranded in this town, hungry, with no place to sleep. And he saw the printer working late at his type case.

“I’m not much of a printer anymore,” Casey said, “but I could be of some help to you.”

“I could use help,” Mr. Boss said. “Any kind of help.” He was getting gray around the ears and his shoulders shrugged as he kept putting type into a composing stick.

Casey enjoyed working in the shop. The equipment was old, all letterpress. It was the same kind of equipment he had learned to run as an apprentice many years ago. And the Linotype was a simple Model Five. He still knew how to clean the plunger and the magazine. He could set type on it, slowly, but carefully.

Mr. Boss seemed glad he had somebody to talk to. “I had high hopes when I was young,” he said one day. “I thought the town would grow, but it didn’t. I used to have a weekly newspaper, but now the town’s got a shopper. It’s printed in the big city. While my wife was living she was a big help, but now …”

And Casey really tried hard. He was willing to remain stuck in South Dakota for the rest of his life. He had been a hobo too long. It felt good to be “eatin’ regular.”

Mr. Boss seemed happy. He would smile at customers instead of being crabby with them. He would put an artistic touch to his typography instead of hurriedly slapping the type together. On Sundays, instead of doing paper work, Mr. Boss would go fishing with Casey. They never caught much, but it felt good to sit under the willows and talk.

“Never had a chance to do much of this,” Mr. Boss would say, “I’ve always been too busy. Didn’t even have a chance to travel. Only once. To the Bad Lands. A hundred miles away. Ever been there?”

“According to legend, the ghosts of Indians live there. In the caves.”

“But the beauty of the stark, barren cliffs …” Mr. Boss was talking like one of those books in this library. “Mother Nature is really wonderful.”

“Mother Nature is a bitch.”

Mr. Boss, clearly angered, clenched his fish pole and went farther upstream, to be alone. Casey realized he had offended the man. He’d have to watch himself or lose a happy home.

So when Mr. Boss would talk about the wonderful things he had read in books, Casey would nod in agreement. To the boss the High Sierras were magnificent. To Casey they were the place where Mother Nature, screaming her head off, had tried to kill him in a blizzard. Mr. Boss would speak on the unending grandeur of the Pacific Ocean. Casey silently remembered the undertow that had swept him out to sea. By conserving his strength and riding the waves he managed to make it back. And what did Mother Nature do? She slammed him against a reef, ripping his shoulder. The big scar was still there, as though from a machine.

“And the desert itself is not really dead.” Mr. Boss would say, showing beautiful pictures of the Mojave. “The generosity of Mother Nature is apparent everywhere.”

“It sure is,” said Casey, remembering the time he was baking in the desert, his lips blistering. He couldn’t even find a decent clump of cactus, so he could suck moisture from its pulp. And what did Mother Nature do? She sent him a rattlesnake for company. “Yes, Mother Nature sure is wonderful.”

“Never heard of him.”

“Walt Whitman wrote about the people of America, the farmers, the carpenters …”

“Down in Arizona, then years ago …” Casey paused. He didn’t want to talk about the goons who chased the hobos off the freight cars. With clubs and baseball bats. And then after they beat the hell out of them they charged them with vagrancy and sent them to the work farm.

Mr. Boss was still dreamy-eyed. “There was a camaraderie among gentlemen of the road …”

Casey remembered the click of a switchblade in the pitch-black freight car. He stayed awake all night that time, his own knife in hand, ready to fight for his life.

“California is the best, isn’t it?” asked Mr. Boss one evening.

“California is the very best,” Casey agreed honestly. “California has been settled by wanderers and it still has respect for them. The Southern Pacific railroad is the best in the land. Their men even tell you where the freight trains stop, so you can make your plans. They don’t kick you off into ditches, at high speed, like they do on other railroads. There used to be a wonderful hobo jungle at Santa Barbara, but they changed it into a zoo. But you can always get a meal and a bed at the Salvation Army. They’ll give you clothes and shoes, if you need them. Or you can stay at the mission. Check in before six o’clock and you’ll get a good supper. But they won’t let you out until five in the morning. And they won’t let you smoke. I got the nicotine fits there one night and ran out into a storm. I wanted to smoke so bad. I slept under a bridge, but I didn’t do much smoking. My tobacco got wet.”

Casey and the boss would stay in the shop almost every night, working and talking. It was getting to be a good life for each of them, a comfortable living without much pressure. And when they’d close the shop Mr. Boss would go upstairs to his apartment to read more books and Casey would go to his room to watch television. He would smile contentedly as he lit his pipe. This good life might last a long time if he kept humoring the boss, telling him a new story every day, a pleasant story, the kind the boss liked to hear.

One afternoon as Casey was two-fingering the Linotype, Mr. Boss tapped him on the shoulder.

“Shut off the motor,” he said. “We’re going to celebrate.”

“My resurrection. The opening of my eyes. You showed me how to live.”

“You made me realize that I’ve been dead here in the middle of South Dakota. I’ve been letting the sands of time sink from under me and soon I’d disappear without a ripple.”

“You’ve been drinking, boss. I can tell from the way you’re talking.”

“I’ve just sold all the equipment to a dealer. Even the building. Come on. Let’s celebrate.”

Casey felt a chill come over him. The white linen … the steak … the refrigerator … the gas stove … the television …

“And what are you going to do?” Casey asked nervously.