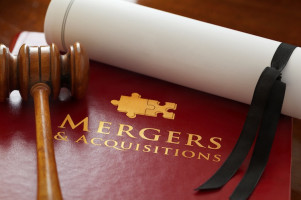 Executives of both firms echoed Hahn’s comment, acknowledging that the merger, which was initiated by Prompt Direct, was a response to current market conditions for the direct mail industry and results in a consolidated company that is well positioned to provide value to customers.

“When Prompt Direct approached us, there initially was a bit of hesitation on our part,” recalled Michael Maroney, Jr., Executive Vice President of Universal. “I was concerned about where the direct mail industry may be heading. Millennials in business are implementing more digital marketing programs than printed direct mail campaigns. That takes away the ad spend for direct marketing. We asked ourselves, did we want to commit by acquiring another direct mail company?”

The answer, ultimately, was an enthusiastic “yes.” With the merger, Prompt and Universal each bring complementary capabilities to the table and a commitment to provide cutting-edge digital solutions to its direct-mail customers. Both were among the first firms to use QR codes and PURLs and have since incorporated cutting-edge technologies, including USPS and proprietary solutions.

“The industry has changed dramatically over the last decade with all the new digital technologies coming on stream that enable marketing that is targeted to more and more specific audience segments,” said Richard Masucci, Prompt Direct President and, with his brother Drew Masucci, co-owner of the firm. “Where customers used to mail, let’s say, 100,000 pieces, today they may need to mail only 20,000 to get the same response, if that many. So printers are losing volume but costs continue to go up. To stay in the black you need to innovate and find a way to become more efficient.”

When brothers Richard and Drew Masucci decided to retire, they believed the best route for Prompt Direct customers and employees was to find a suitable firm to merge with. Prompt Direct and Universal had been friendly competitors for more than 30 years and saw a number of synergies between the two firms.

“Both companies are family owned and share the same strong commitment to their employees and customers,” said Drew Masucci. “That, combined with the high quality of work they do and the fact that we had very few duplicate accounts, made it a perfect fit.”

“We knew we’d be able to bring a number of our employees with us and that was a key positive for us,” said Dennis Lacognata, Vice President of Prompt Direct, who will serve as head of sales and business development for the Prompt Direct division of Universal. “Also, the two firms offer many of the same services but we also have different strengths which we can now leverage together for our customers.”

For now, the Prompt Direct name is being maintained and Prompt Direct customers will be served by the same account executives. Maroney notes that “culturally, the two firms fit very well and that makes it easier to focus squarely on our customers. There are some differences in our operational processes. For now, we’re proceeding with business as usual and, over time, we’ll look at best practices and make some adjustments to further increase efficiencies.”

An initial step in that direction will be the addition this fall of a second shift at the Universal facility in Piscataway. “That will further strengthen our ability to serve our expanded customer base and manage and turn projects quickly and efficiently,” said Maroney.

Finalization of the merger was the culmination of a long negotiation that was not without its challenges. Since Prompt Direct was located in Staten Island, New York, and the plan was to move all operations to Universal’s plant in New Jersey, the company was required to comply with the New York Workers Adjustment and Retraining Notification (WARN) Act, which mandates that companies with 50 or more employees notify employees in advance of a plant closure. “Once we told employees of the upcoming merger, a number of them left because they knew they didn’t want to make the commute,” Richard Masucci recalled. “That meant we had to work harder with fewer people, but we got through it and continued to provide customers the quality service they expected and deserved.”

Both companies credit Graphic Arts Advisors and Mark Hahn with a key role in bringing the agreement to fruition. “When we reached an impasse in negotiations, Mark played mediator. He provided the financial modeling and worked steadfastly to get us to agree on certain things and to keep the talks moving forward,” said Drew Masucci.

“We couldn’t have come to a resolution without GAA,” noted Lacagnota. “Mark was completely vested in getting both companies to come to the table and forge an agreement that satisfied and achieved the objectives of both firms.”