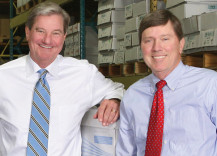 David McGehee (left) will take on the title chairman and CEO, while his brother Sutton (right) becomes president.

The decision honors more than 50 years of heritage at Mac Papers, as well as deep, mutual respect among the two brothers that lead the third-generation, family owned and operated business along with their cousin, Mac McGehee, executive VP. The honor is purely symbolic, as Sutton and David will maintain their current roles and responsibilities within the company following the title change.

The effective date, July 12, carries significance as it marks the tenth anniversary of Sutton McGehee’s appointment to chairman and CEO on July 12, 2006, following the death of his father and Mac Papers co-founder, Frank McGehee.

“It’s been an incredible privilege to hold the title of chairman and CEO of Mac Papers for the past decade,” remarks Sutton McGehee. “With the approaching 10-year anniversary of my father’s passing, there’s no better time to honor both my father and my brother with this decision. David deserves this acknowledgment without a doubt, but more importantly, I know this is what my dad would want.”

David adds, “I’m proud and humbled to accept the title, especially in light of the reverence and admiration I have for my father and brother, who have each held this position before me." He continues, “It’s an honor to work with Sutton, Mac and the third generation as we work every day to grow the company that my dad and uncle passed along to us and do our very best to make them proud.”

Established in 1965, Mac Papers was founded by two brothers, Frank and Tom McGehee, whose sons Sutton and David (Frank) and Mac (Tom) lead the company today, alongside five members of the third generation who work in the business: Scott and Graham Riley, Ray McGehee, David McGehee, Jr. and Courtney McGehee.

About Mac Papers
Headquartered in Jacksonville, Fla., Mac Papers is one of the largest merchant distributors in the Southeast United States. The company is a distribution partner for paper and print, packaging, facility supplies and office products. Mac Papers works with best-in-class suppliers to help businesses and consumers deliver quality results, improve efficiency and increase their bottom line. The company operates 22 locations and 18 retail stores across nine states in the Southeast. Mac Papers is a third-generation, family-owned and operated business founded in 1965.