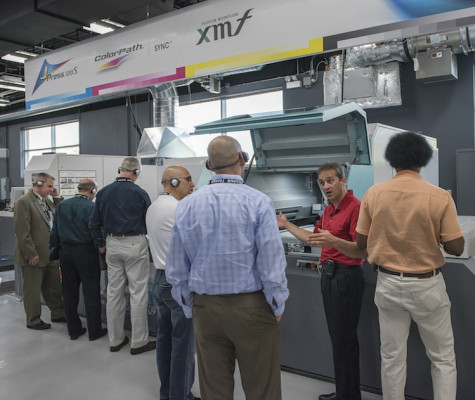 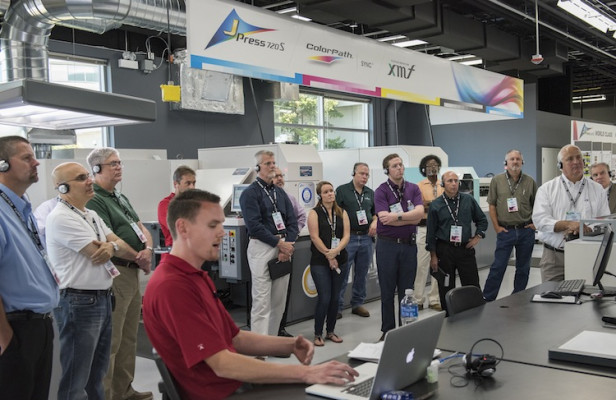 A representative from Fujifilm showed the capabilities of the J Press 720S B2 sheetfed production inkjet press. 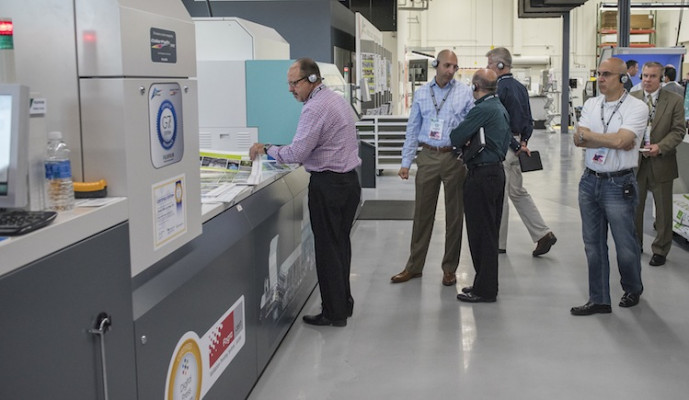 An attendee at the Production Inkjet Summit looks at a proof printed on the Fujifilm J Press 720S B2 sheetfed production inkjet press.

The J Press 720S is designed for print runs of just one or thousands, where traditional offset and other digital printing solutions fail to meet expectations. With a 29.5"x20.9" sheet and an output of 2,700 sheets per hour, the 720S incorporates Fujifilm Inkjet Technology including Fujifilm Dimatix Samba print heads, Fujifilm VIVIDIA aqueous inks, and Fujifilm image optimization. Quickly gaining market acceptance, the J Press 720S has become the ideal solution for printers looking for a digital inkjet solution that delivers the quality of offset prints with the versatility to handle even the shortest of press runs.

"Fujifilm continues to set the standard with the J Press 720S," says Ed Pierce, product marketing manager, Fujifilm North America, Graphic Systems Division. "J Press 720S owners are telling us that the print quality and color consistency is better than any other digital device, and they are winning new business as a result."

As a collaborative information exchange, the summit featured industry-relevant presentations, including a session on 'Color Management' as well as 'Inkjet and the B2 market', presented by Jim Hamilton, group director, On-Demand Printing and Publishing, InfoTrends. Hamilton is responsible for Info Trends’ production print and digital media research, forecasts, and analysis. His discussion focused on market trends, the growth of inkjet in production digital printing, and the B2 format and the commercial print market.

Hamilton encouraged attendees to use inkjet to add new applications and transform their business model to provide solutions that inkjet delivers.

"Digital print competes most effectively when it accomplishes what offset cannot do," commented Hamilton. "I’ve seen a number of applications printed on the J Press sheetfed press and I’m impressed with the print quality."

Hamilton went on to explain that the J Press sits between the cut-sheet color toner and the roll-fed inkjet products in a class of products that support paper sizes of B2 or larger, and added, "In the inkjet marketplace for B2-sized presses, the J Press is the most successful one in the market."

When asked about the color consistency of the J Press 720S output, Riegger responded, "We did a test on the J Press and measured color across the sheet as well as sheet to sheet. The maximum Delta E we recorded was 1.07 where other digital toner devices we tested had as much as a 7-8 Delta E variance."

Bielecki added, "We run jobs several times throughout the year for some clients. The J Press 720S matches the color perfectly every time."

Hernandez spoke out how Classic recently arranged a 'shootout' and had two of their key clients evaluate the output, side-by-side. "The clients accused us of slipping in an offset print within the blind test,” added Hernandez. "They thought the J Press 720S printed sheets were actually printed offset."

Riegger, whose company prints a lot of variable work for high-end retailer’s summed it up by saying, "When it comes to print quality and color consistency, nothing can touch the J Press."

About Fujifilm
Fujifilm Holdings America is based in Valhalla, N.Y., and is the regional headquarters for the Americas. It is comprised of 14 directly owned subsidiary companies in the U.S. and Canada, and two in Latin America: Brazil and Colombia. The company manufactures, markets and provides service for a broad spectrum of industries including photographic, medical imaging and informatics, pharmaceutical and other life science industries. Industrial segments include data storage, electronic materials, chemical, and graphic arts products and services.

Fujifilm Holdings Corporation, Tokyo, Japan brings continuous innovation and leading-edge products to a broad spectrum of industries, including: healthcare, with medical systems, pharmaceuticals and cosmetics; graphic systems; highly functional materials, such as flat panel display materials; optical devices, such as broadcast and cinema lenses; digital imaging; and document products. These are based on a vast portfolio of chemical, mechanical, optical, electronic, software and production technologies. In the year ended March 31, 2016, the company had global revenues of $22.1 billion, at an exchange rate of 112.54 yen to the dollar. Fujifilm is committed to environmental stewardship and good corporate citizenship.