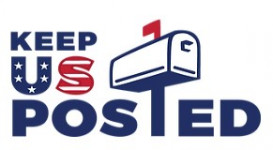 Keep US Posted, an alliance consisting of consumer interests, industry groups, newspapers, nonprofits and businesses, applauds the U.S. House Committee on Appropriations for directing the Postal Regulatory Commission, which governs the U.S. Postal Service, to study the impact of planned postage increases. The Committee’s action, included in the 2023 spending package, is a direct response to Postmaster General Louis DeJoy’s announcement that stamp prices will increase July 31 and every six months thereafter, despite this year’s bipartisan postal reform law designed to fiscally stabilize the Postal Service and prevent unnecessary postage hikes.

“It is destructive for Postal Service leadership to squeeze every last drop of revenue from the mail at the expense of the American people,” said Keep US Posted Executive Director and former Congressman Kevin Yoder (R-Kans.). “In just a decade, Americans could be paying well over $1 to mail a single letter. Using the mail will become unaffordable for American families, as well as newspapers, nonprofits, and businesses that depend on the Postal Service. These excessive postage increases will decrease volume and revenue so much that it will ultimately hurt the Postal Service’s 650,000 workers and their ability to keep delivering for our country. Projected mail decline will become a self-fulfilling prophecy.

“The planned stamp hikes fly in the face of Congress, whose bipartisan postal reform law provided $57 billion in reduced USPS liabilities specifically intended to prevent excessive postage hikes. Louis DeJoy says he’s running the Postal Service like a business, but it’s not. The Postal Service is just that —a  public service. It’s the only courier able to serve the country’s 163 million delivery points in more than 41,000 zip codes.

“If regulators don’t hold the Postal Service accountable for the funding provided by Congress, all Americans will lose. That’s why Keep US Posted has worked to educate both House and Senate Appropriations Committees and advance language requiring a formal on-the-record review to prevent excessive postage increases.”

The bill now goes to the House floor, while the U.S. Senate works on its 2023 spending package.