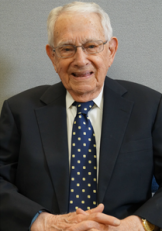 NORTH KANSAS CITY, Mo. — November 29, 2016 — John Wurst died Wed., Nov. 23, in a manner much as he lived, with an inevitability and an unbending path, while being surrounded and supported by his wife and four children. He lived his life with purpose and love, and was able to touch many others in a positive way as a husband, father, grandfather, businessman and community leader.

John was born in Kansas City on July 15, 1930 smack in the middle of the Depression. He grew up in a house of can-do people, the son of Henry and Virginia Wurst. Their infectious energy and positivity filled their home with a vibrant imperative, to tackle the next thing, and make the next thing a little better.

He became a leader early on as a precocious intellect, a YMCA Camp Gravois counselor, class officer in the Paseo High School graduating class of 1947, and a one-year Stanford University student until the money ran out, finishing his college studies in business in 1951 as a proud member of Kappa Sigma fraternity and a Jayhawk at the University of Kansas.

During the Korean conflict, he was drafted and dutifully fulfilled his obligation to the US Army as a printer reproducing secret maps in the Topographic Battalion while stationed in Japan. Following discharge he joined his father at Henry Wurst, Inc. and began a remarkable career in the printing industry. As president and subsequently chairman he guided the company to great success. While working to help the business grow and thrive, he valued the many people who spent some or all of their careers with the company. He took pride in seeing people blossom, families grow, and ultimately seeing that people were able to confidently retire at the end of their careers. For his own path, he chose not to retire and came to the office regularly until his last days.

John took on many industry leadership roles with board positions in the Printing Industries of America (PIA), the Graphic Arts Technical Foundation, and the National Advisory Council for Printing Education. He was honored with PIA’s Lewis Memorial Lifetime Achievement Award and the prestigious Ben Franklin Honor Society.

He met the love of his life, Margaret (Peg) Stanton, through Sunday School at Trinity Methodist Church. They married in 1955, and had four children together. They recently celebrated their 61st anniversary.

He was a 50 year member of Country Club United Methodist Church, and reveled in family, friends, travel, tennis, baseball, reading, and the camaraderie of the printing plant. Even in recent years he took great pleasure in bringing his whole family together for a week each year in a vacation house in various destinations, simply to expand the family experience. Books, games, grand adventures and reminiscing wrapped up in food and multi-generational interaction were a delightful tonic for him and everyone.

He is preceded in death by his parents, Henry and Virginia Wurst, and his sister Susan Carter. Survivors include his wife Peg and his four children Mike Wurst and his wife Allison, Amy Wurst, Tim Wurst and his wife Gwen, Emily Hendricks and her husband Andy, all of Kansas City, his brother H.R. Wurst and wife Phyllis of Lincoln, Calif., and his sister Jean Archer of Colorado Springs, Colo. He is also survived by his seven grandchildren and three great-grandchildren who fondly call him ‘Granddaddy’ and whom he greatly cherished.

A Celebration of Life will be held at Village Presbyterian Church, 6641 Mission Road, Prairie Village, KS at 1:00 p.m. on Sat., Dec. 3. In lieu of flowers the family suggests any donations be made to the Print and Graphics Scholarship Foundation, In memory of John Wurst, 301 Brush Creek Road, Warrendale, PA 15086.

More images can be viewed here.