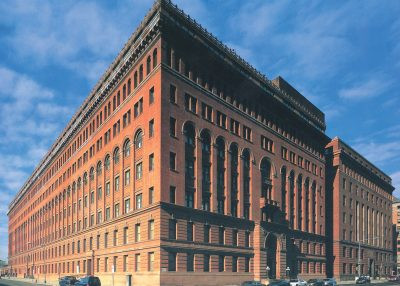 The large red brick building that houses the GPO in Washington "was erected in 1903 and is unusual in being one of the few large, red brick government structures in a city where most government buildings are mostly marble and granite," according to Wikipedia.

The new deadline for submitting RFPs to the Government Publishing Office (GPO) to print, finish and mail letters, inserts, postcards, envelopes and questionnaire packets in English and Spanish for the 2020 U.S. Census is Sept. 10th - with the winning bid awarded by the GPO and U.S. Census Bureau to a contractor in November. One large print provider that won't be in the running in this latest round of RFPs for the GPO's single biggest contract, however, is Stamford, Conn.-based Cenveo.

Despite initially being awarded the $61 million term contract back on Oct. 16, 2017, the U.S. Justice Department, in conjunction with the Census Bureau and GPO,  terminated the agreement due to concerns about Cenveo's liquidity and ability to complete the project in light of Cenveo's Chapter 11 bankruptcy filing.

Despite not being able to fulfill the contract, Cenveo didn't walk away empty-handed; a settlement agreement was negotiated to avoid litigation whereby Cenveo received a $5.5 million termination fee (payed by the Census Bureau) and payment for what initial Census test work it had completed. The two sides also agreed that Cenveo would still be allowed to bid on other GPO work and the agency has continued to award it contracts.

But that's not the end of the story about how the 2020 U.S. Census bid was mismanaged. A memorandum issued March  28, 2018, by the then-GPO Inspector General Michael Raponi following an internal investigation - and published within an NPR July 31st article (click here to view Raponi's memorandum) - revealed several procedural violations by GPO contracting officials. This included not performing simple due diligence to determine Cenveo's financial health (publicly held Cenveo had long been in poor financial shape due to its heavy debt load and, ultimately, filed for Chapter 11 bankruptcy protection just four months after being awarded the contract). But, perhaps even more egregious, the report said that someone in the GPO procurement department permitted Cenveo to lower its bid by about $9 million after the RFPs from other printers had been unsealed.

"We noted contracting personnel did not follow key provisions in GPO's Printing Procurement Regulations (PPR) when awarding the contract," wrote Raponi in the investigatory report.

According to the memorandum, bids had been submitted for the 2020 Census contract by RR Donnelley, Taylor Corp., SG360° and Cenveo. SG360° was initially determined to be the low bidder, Raponi indicated, but the chairperson of GPO's Contract Review Board allowed SG360° to withdraw its bid and drop out of the running due to a mistake it had made in determining the pricing.

As part of its bid, Cenveo had input a decimal point in the wrong place ($1250000.0 instead of $125000.00) for the makeready pricing for each of the questionnaire forms. And, when the number shown was questioned by a GPO contracting employee, the printer claimed it had made a clerical error. Cenveo was then improperly allowed by a GPO contracting officer to alter its bid, the Inspector General investigation determined, which, in turn, made its final bid lower than what had been submitted by Taylor Corp.

The report indicated, "Based on the conflicting interpretations of the intended bid, it is clear that the clerical mistake in Cenveo’s bid was anything except 'apparent on its face in the bid,' and Cenveo’s claim should have been considered under PPR, Chapter XII, Certification and Award, Section 6, Mistakes in Bid, subsection 3, Other Mistakes Disclosed Before Award." Subsection 3 states:

Commentary: Where Was GPO Director Oversight?

Raponi's memorandum also appeared to show that his Inspector General-led investigation only included rank-and-file GPO employees. Although it did not indicate any wrongdoing by any top GPO officials, the irregularities and failure to follow procedure do raise a bigger question about the management and oversight at the highest levels at the GPO during that timeframe. Given the importance and size of the 2020 U.S. Census project, one has to wonder if the current director (formerly called the Public Printer) was overseeing and keeping a close watch of its status.

Perhaps it can partially be blamed on the state of turmoil within the agency itself at the time. Director Davita Vance-Cooks served in that position from 2013 to 2017. Upon her departure in November 2017, she was replaced by GPO Deputy Director Jim Bradley to serve as Acting GPO Director. After serving just four months in that position, however, Bradley suddenly announced his retirement after working at the GPO for 22 years. Bradley was replaced by GPO Chief of Staff Andrew Sherman, who then also announced his retirement and departure from the GPO in late June 2018.

Former Public Printer Robert Tapella has been nominated to be the new GPO director.

On June 12, President Trump nominated Robert Tapella to be named the incoming GPO director. Tapella had served as the 25th Public Printer under President Bush and continued in that role under President Obama. The 2010 Census contract was awarded to RR Donnelley under his watch at the GPO and was completed as prescribed.

A 1991 graduate of Cal Poly San Luis Obispo with a B.S. in graphic communication, he began his career as calligrapher, illuminator and bookbinder, and later ventured into print brokerage and direct mail businesses. Assuming his nomination goes through, it appears - from the outside anyway - that Tapella will have his hands full getting GPO's house back in order.