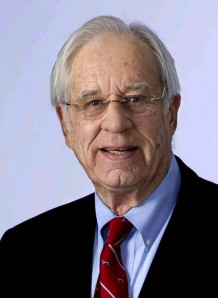 The printing industry lost another member of its esteemed "old guard" with the passing of John Frautschi on March 9th at age 87.

John graduated from Amherst College in Massachusetts in 1951. He then attended Carnegie Mellon and earned a B.S. in Graphic Arts and served in the U.S. Army. John joined his father (his brother Jerry joined them soon after) in 1955 at the Democrat Printing Co. Together, the trio transformed Democrat Printing into what became Madison, Wis.-based Webcrafters Inc., one of the region's most successful and respected book printing manufacturers. Webcrafters was ranked No. 81 on the latest Printing Impressions 400 list, reporting most recent fiscal year sales of $60 million.

Webcrafters' long and storied history dates back to the 19th century, when Democrat Printing opened its doors for business in 1868. Incorporated in 1890, the newspaper portion of the business was sold in 1921 and Democrat Printing became a general commercial printer.

Fast forward to 1925, when Walter Frautschi joined Democrat Printing, the first of his 72 years with the company. The Frautschi family became sole owners of the company in 1959.

At an early age, it was evident that John Frautschi had a date with printing destiny. His journey started on the delivery truck before heading to the shipping department. He literally went through the back door of Democrat Printing, proceeding into the bindery, followed by the pressroom.

"I had worked here summers as a kid, downtown in the old building," John related to Printing Impressions during an interview tied in with his induction into the Printing Impressions/RIT Printing Industry Hall of Fame in 2000. "I can remember walking up the steps of that place, the creaky wood and the smell of all the type solvents." As a young boy, he recalled his father bringing home linotype slugs wrapped in butcher's paper with a string tied around it. They would melt the type and pour molten lead into the top of molds to make hundreds of little toy soldiers.

"I really didn't think of any other profession," he admitted. "It was a goal for me. Maybe I had some ink in my veins."

It was definitely in his genes. His brother, Jerry, joined him in 1956 and remained with the organization until selling his interest in Webcrafters to John in 1997.

Democrat Printing faced a crossroads equipment-wise in 1959. The Frautschis were using flatbed, two-color letterpress equipment that was "clunking" along, printing magazines and publications in four colors. That meant two trips through the press, on both sides — a total of four passes. It wasn't as productive as Democrat Printing needed it to be, so a change was in the making. The new kid in town, web offset printing, was just what the printer ordered.

In order to maintain the financial standing of Democrat Printing, the Frautschis incorporated a new company, Webcrafters. Under the new company, the family put down $25,000 and took out a loan to purchase the $250,000 press, which boasted a 239⁄16˝ cutoff. With competitors using a 223⁄4˝ cutoff, Webcrafters had the distinct advantage in the education niche. One major education customer, McGraw-Hill, was presented with an 11˝ tearout for its typing workbooks. The pads were wire stapled across the head and cross-perforated, to allow students to tear out full letterhead-size typing paper from workbooks. Webcrafters turned the corner with this new niche.

"Within five years, we had three or four webs running," he recalled. "Today [2000], we're operating seven 32-page, single-web presses in addition to our more conventional 16-page presses. It allows us to schedule well and gives us a lot of flexibility.

Like the social and political climate of the times, the 1960s also paved the way for change and the exchange of ideas in the commercial printing realm. The Web Offset Association gatherings turned into all-night talk sessions. Webcrafters had an ace in the hole in the form of Fritz Wildeman, who was pretty far ahead of the curve. Wildeman developed the magnetic packing gauge to more precisely control packing on plate and blanket cylinders.

Moistening on the web was another early innovation — early web presses featured edge guides, and Webcrafters weakened the fibers in the paper with glycerin or another moistening agent, which allowed them to control quarter-folds more precisely.

John helped lead the web cover printing revolution in the late 1970s. The guinea pig was a Schriber-Harris forms press; he had the manufacturer add a fourth ink form roller. Another printing unit was added to print covers two-up.

"That was the first time we'd ever been involved in a concept with the manufacturer, changing it from one type of press to another," John recalled. "An additional printing unit was added to the press so that we could print alternate covers and let the ink recharge itself in between. We got in-line UV coating in 1979, and there were a lot of challenges getting the UV to adhere to the oil-based heatset inks."

Webcrafters also weighed in early with computer-to-plate for the book manufacturing segment. John saw an advantage in using bigger presses for short runs, giving them twice the normal output with one web for every makeready. The equipment, short runs and educational niche, combined with gradual growth, helped Webcrafters build a reputation and solid foundation.

John's successful and innovative professional career also earned him many honors. He was named the Ben Franklin Club Graphic Arts Man of the Year in 1979, and he was awarded the Web Offset Society's Vision Award in 2001. John also served on the board of directors for the former Graphic Arts Technical Foundation (GATF); the local PIA affiliate, Printing Industries of Wisconsin; as well as several local banks, schools and other organizations.

Service to industry and the local community was a hallmark trait for him and his company. One of their heartfelt measures of success was as corporate benefactors to local charities and civic causes. At its peak, Webcrafters supported more than 750 Madison, Wis., families. John was said to be especially proud of this.

Equally impressive were John Frautschi's civic causes. Among these were his (and brother Jerry's) donation of 1,700 feet of Lake Mendota shoreline and land, adjacent to Picnic Point, to the University of Wisconsin. This area is now called Frautschi Point in honor of their father, Walter, and will remain undeveloped and open to the public. He also founded a private foundation that has supported dozens of local charities since the early 1980s.

A fourth generation Madisonian, John grew up on the shores of Lake Mendota during the 1930s and '40s, and enjoyed several boyhood pursuits, including skiing and ski jumping, and other outdoor activities. He once reportedly jumped 131 feet on a ski jump that was set up for a maximum of 129 feet. John also had a passion for sailing, and loved to tell about the time he was blown off the lake in a surprise gale.

As related in his obituary, John was also humble and gentle enough to take Ivan (his realistic bear puppet) to cheer up sick kids in the hospital. He related how one sick child quietly told him, "at first I thought he was fake."

John was preceded in death by his wife, Mary Weston Frautschi. Survivors include his children, grandchildren, and his brother, Jerry.

A farewell service is planned for him on Friday, March 24th, at Christ Presbyterian Church in Madison, Wis., at 11 am, followed by a reception for close friends and family. A visitation will be held at the church from 9:30 am until the time of the service.

In lieu of flowers, the family requests donations be made in John Frautschi's name to the Ronald McDonald House of Madison, 2716 Marshall Court, Madison, WI 53705.

Friends and business associates can also share their memories at www.CressFuneralService.com.