For Commercial Printers, the Art of Self-Promotion Is Key to Sustained Organic Sales Growth

For many commercial printers, self-promotion is not high on the priority list. Often, it is a secondary task the owner or a manager take on when, and if, they have time. It is inconsistent, if done at all, and if the results aren’t immediate, it tends to be abandoned quickly. But self-promotion is a key factor in the success of every shop — whether they know it or not.

First and foremost, it is important to separate “self-promotion” from “sales” efforts. While they have similar goals, self-promotion is a much less targeted way to go about it. The goal isn’t necessarily to be able to track X number of jobs to Y promotion, like a shop would be able to do with direct sales calls. Rather, it is about creating awareness, which is what leads to increases in those sales numbers.

“Marketing is about stocking the pond,” says Bill Farquharson, president of Aspire For and a sales trainer for the graphic arts industry. “You want someone to call you and say ‘I see you’ve solved a problem for someone else. I’ve got that problem and I need your help.’ That’s the ultimate goal. Build the credibility, differentiate yourself and the sales call has been made for you.”

Flottman Co., based in Crestview Hills, Ky., is a commercial printer that has found a niche in miniature folded inserts and printing for the pharmaceutical industry. 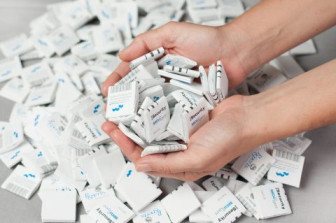 The Flottman Co. leaves behind branded examples of what it can produce best, such as miniature folded inserts.

In 2014, Flottman made a concerted effort to focus on self-promotion, both online and with direct mail pieces, notes Ed McMasters, the company’s director of marketing and communication. Tracking the online traffic through their website in 2014, they had 40 inquires and just one sale. In 2018 to date, with several months still to go, the company has already received 77 inquiries that generated 16 sales. “Not only have we gotten more inquires, but we’ve gotten better quality inquiries,” he adds.

Flottman’s results aren’t outside of the norm. Self-promotion is about ensuring people know your company name, what your specialties are and how they can find your shop when the time comes to place an order. It is about building awareness, which takes time and effort.

Patrick Whelan, president of Great Reach Communications, points out that while a great self-promotion strategy touches potential customers on multiple levels, at its heart it is also very simple. He preaches a three-prong approach: know me, trust me, like me.

Know me, Whelan says, is using methods such as newsletters and direct mail postcards to ensure everyone in a printer’s potential market knows exactly who they are. He notes that shops need to ensure they are always top-of-mind, since there is no predicting when a brand might suddenly be ready to run a campaign.

Trust me is the next step. “Printers have to differentiate themselves from the competition,” Whelan says. “That is the most important thing they have to do besides being noticed. They need to stand out as the trusted provider of their services because, at the end of the day, the job is going to go to the company [print buyers] trust the most. It’s not based on price — price is an excuse.” 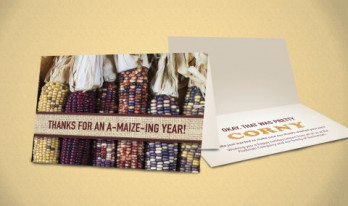 By sending a Thanksgiving card every year, the greeting from Flottman is the first holiday card customers see, allowing it to stand out from the onslaught of cards clients receive in December.

Whelan adds that, just as Flottman has found in practice, as many as 60% of potential customers will visit a printer’s website before making contact. They are forming their opinions based on the self-marketing the shop has done — the postcards they receive in the mail, the quality of the content in the newsletter, the look and feel of the website.

“Once they come to your website, how does your site stack up to others they’ll look at?” Whelan asks. “That’s what you’re going to be judged on.” He stresses that the biggest change that has happened to the printing industry over the years has been that customers now control the sales process. They are actively seeking out companies they want to do business with, and are controlling the flow of information. That is why it is so critical for print shops to take advantage of all of the self-promotional opportunities they can.

Putting your plans Into Practice

Knowing that self-promotion is the key to growing long-term business is one thing. Knowing how to execute it is something else entirely.

According to Farquharson, one of the absolute keys to self-promotion success is to actually do it.

“Back in the day, people used to say, ‘let’s do a newsletter,’ and they would produce one but then never do another one,” he says. “It was just too much work editing it and pulling together the stories, so there was never a second version. The problem is that people start with good intentions, but they don’t follow through.”

Follow-through is something that McMasters says is important, noting that his shop sends out a quarterly newsletter as one of its key pieces of regular self-promotion. He adds that they make sure to send out every edition within a week’s time frame of when it’s supposed to come out. “People aren’t surprised to see it in December when they expected to get it in November,” he says.

Another regular campaign Flottman engages in is an annual Thanksgiving card it sends to all of its customers, thanking them for their business. They chose Thanksgiving because it allows Flottman to stand out from the crowd, arriving before the onslaught of holiday cards. “It gets the ball rolling, and people have come to expect they’ll get our card first,” McMasters says.

Other content the shop sends out is press releases about new equipment or new hires — anything newsworthy they can promote. McMasters points out that not only does Flottman get the initial recognition from the release itself, but they then share it on their social media channels, on their website and in their newsletter, allowing each piece of content to go further.

Another key to success, Farquharson contends, is to be remarkable. Self-promotion is something that allows a shop to show off, to give potential customers a taste of what they could be getting if they bring their business over. Using different types of paper stocks, for example, might get a business person to stop and take notice. Sending mailers in unusual sizes is another technique to make a piece jump out from the crowded mail box.

Flottman took that philosophy to heart. With a recent announcement of a new salesperson, rather than just send a postcard or a press release, they designed and sent the news as if it were a greeting card.

“We saw great results from that,” McMasters reveals. “We also saw a big bump in our website traffic as a result of people looking for more information.”

Other types of content a print shop can build on, according to Whelan, are the everyday things that happen in every office. Especially on social media channels, it is a chance for the shop to connect with prospects on a more personal level. He advocates staying away from a more business-like tone, instead sharing things such as community involvement, charitable events, even office birthday parties.

Finding ways to stand out with different or unusual self-promotion campaigns is a great way to get noticed. This is one example of a clever direct marketing promotion Flottman used in the past, which incorporated socks as a giveaway. 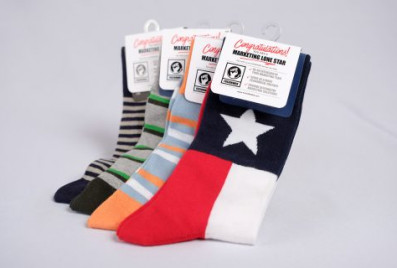 “It gives people an insight into your company on a more personal level,” Whelan says. “Don’t overthink it. It doesn’t have to be [all] business — that’s what your website is for. Social media is meant to be social.”

Someone to Oversee Efforts

The reality is that self-promotion can take a very wide range of forms, using any number of marketing techniques. McMasters advises that the best place to start, especially for those printers that are truly serious about self-promotion, is to hire a dedicated person. “Put someone in charge who has experience and is willing to take the time to invest in it,” he stresses. “It takes time not just to do it, but also to monitor the results, engage customers and continually make it better.”

The content can’t just be something tossed together at the last minute. It requires time to create the content and send it out to the right channels, then track it effectively to see what works — and what doesn’t — and constantly be adjusting the campaigns and pieces as new information comes in.

And while a shop might not be able to point to a single element within its self-promotional efforts that led to a specific sale, printers that commit to it for the long-term will enjoy a steady rise in organic business growth that can’t be obtained any other way.

Bill Rizzo to Retire from Kirkwood

How to Get Things Done in Sales

What You Should Do for Your Sales Summer Cleaning