The wait is over. Pantone revealed its annual Color of the Year yesterday, bestowing the honor to Pantone 16-1546, which the leading color authority refers to as "Living Coral." According to Pantone, the color is meant to evoke feelings of warmth and life, highlighting the impressive colors found in nature. Specifically, the Pantone website states this year's color is "an animating and life-affirming coral hue with a golden undertone that energizes and enlivens with a softer edge." 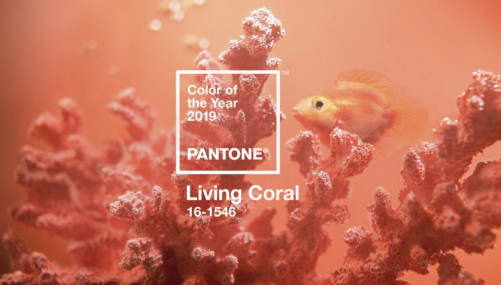 Each year, the Pantone Color Institute selects a color that ultimately influences "product development and purchasing decisions in multiple industries, including fashion, home furnishings, and industrial design, as well as product, packaging and graphic design," the website explains. But with the choice of this year's color, it appears Pantone is probing at something a little more complex than the color wheel. The Institute, which has been selecting a Color of the Year for two decades, explained in a press release that the choice was influenced by the growing desire for "authentic and immersive experiences that enable connection and intimacy," especially in a world so heavily impacted by technology and social media.

The release went on to say:

Representing the fusion of modern life, Pantone Living Coral is a nurturing color that appears in our natural surroundings and at the same time, displays a lively presence within social media. “Color is an equalizing lens through which we experience our natural and digital realities and this is particularly true for Living Coral,” said Leatrice Eiseman, Executive Director of the Pantone Color Institute. “With consumers craving human interaction and social connection, the humanizing and heartening qualities displayed by the convivial Pantone Living Coral hit a responsive chord.”

This isn't the first time Pantone has turned to mother nature for inspiration. Two years ago, the Institute selected "Greenery," which it says "symbolizes the reconnection we seek with nature, one another and a larger purpose.”

This year's color however, goes a step further than representing a connection with nature by symbolizing the need to protect it. Laurie Pressman, VP of Pantone's color consulting unit, told Quartz that the color was chosen as a reminder that environmental preservation is growing increasingly important.

“The overriding influence [this year] was the environment,” she says. “Top of mind was the arresting beauty we see in nature and the importance of preserving the environment … Think of coral reefs, they provide shelter and sustenance to marine life and here we are watching them disappear.”

The idea that this year's color — along with Greenery two years ago — is meant to portray the beauty of nature and offer a means of escapism from the current political climate is something that one Slate writer pointed to as a reason Pantone should rethink its process for choosing its Color of the Year.

Something insidious is going down at the Pantone Color Institute. Each December, the company announces a new Color of the Year — and its 2019 selection, a warm pink tone called Living Coral, feels like a troll directed at a planet rapidly growing inhospitable to the many organisms that call it home ...

As forests burn, reefs wither and far-right politicians turn lush carbon sinks into hubs for methane emission, why must Pantone taunt us by praising the life-affirming nature of all the stuff that’s dying?!

Regardless of your political leanings or environmental feelings, Living Coral is sure to grab your attention (unlike Pantone's "World's Ugliest Color").