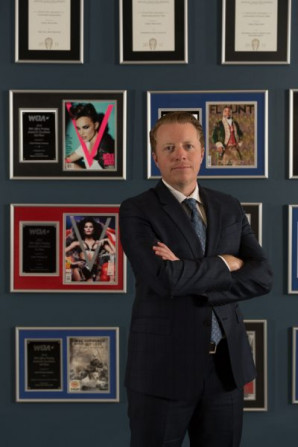 As a third-generation printer who literally grew up in the family business founded by his grandparents in 1953, Allan Creel certainly fits the proverbial description of having ink in his veins. And, when LSC Communications recently offered him the chance to buy back the Las Vegas-based CREEL offset plant that he had sold to the printing conglomerate in July 2017, Creel decided to jump back in head first.

The acquisition only includes the 250,000-sq.-ft,. sheetfed and web offset, former headquarters printing plant in Las Vegas, and not the Creel Digital Div. (Digital Lizard), which Creel had acquired in 2011, nor New Jersey-based GlobalSoft Digital Solutions, which it purchased in 2015.

“I’m excited to be back in the industry,” Creel told Printing Impressions in a phone interview. “I’ve been in it my whole life. There’s a lot of excitement among workers in the plant for us to be back as an independent, family-owned company providing great service.

“I really believe it’s a good time to be a financially strong, independent player in the market operating a lean and efficient operation,” he added. “We want to get back to the service and high quality levels that we had long been known for.”

The operation will continue to produce publications, such as trade-based magazines in the 50,000 to 100,000 run lengths; direct mail for online retailers, health care documents, such as open enrollment kits; smaller, more targeted and frequent, catalogs; among other commercial work.

As part of its sale agreement with LSC, CREEL will also serve as a preferred vendor for LSC customers in the western U.S. And the CREEL platform will continue to produce variable publications and calendars from a Vancouver-based publishing company owned by Allan Creel.

With the new ownership structure, Creel believes there is a renewed sense of commitment among the 300 employees, many of whom have been with the company for more than two decades. With the departure of the former LSC management team, Creel says that some existing employees were moved back into their former managerial roles, and some other long-time staff members have been promoted. “I’ve known a lot of these people my entire life,” he said. The acquisition also created an opportunity for Creel to create a very lean organizational structure.

Looking back, Creel admits to having gotten kind of distracted over the years due to industry changes, and decided to pursue other interests when LSC —then flying high as a publicly held enterprise — reached out to him in 2017 about its desire to make the acquisition.

But no one could have foreseen what would happen in the ensuing three years: a failed $1.4 billion all-stock acquisition by Quad of LSC largely due to a Department of Justice antitrust lawsuit, the natural decline of the printing industry, LSC’s Chapter 11 bankruptcy filing in April 2020, the worldwide COVID-19 outbreak, and LSC’s pending acquisition by private equity firm Atlas Holdings.

“CREEL was never really integrated by LSC,” Creel points out. “The plan was always to keep it as a separate business because we operated a different business model.” For Allan Creel, it’s fortuitous that CREEL has become an independent company again.