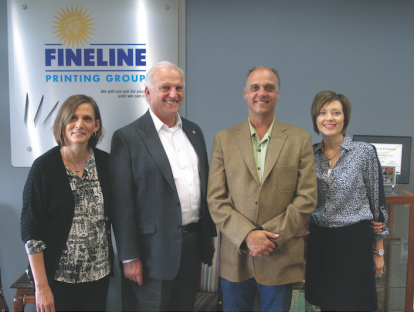 The American Dream has brought countless hopefuls to the land of opportunity. For many, the thought of being an independent business owner is enough to make the trek worthwhile. Richard Miller was one of those hopefuls when he left his homeland of Argentina in 1965 at age 16 to immigrate to the U.S. with his family. He made the journey with the belief that, in America, everyone is bound to be successful.

“I always had a penchant for having my own business,” he says.

In 1981, after moving from New York to the Midwest, Miller opened a small print shop. To this day, he remains the president and founder of the Indianapolis-based Fineline Printing Group that he began 35 years ago.

However, the once small print shop isn’t so small anymore. Fineline has since grown to employ 70 with nearly $15 million in annual sales. The minority-owned company serves universities, healthcare organizations and nonprofits in need of communications and fulfillment services. It boasts more than 300 clients, meeting their needs by producing one million mail pieces per month and processing hundreds of orders per week, with 40% of its business coming from out of state.

Recent growth has prompted a $3.79 million expansion, partially funded by an Indiana Economic Development grant as an incentive to help bring more jobs to the Hoosier state. The current 53,000-square-foot facility will expand to 72,000 square feet, bringing with it 25 new jobs by 2019.

Now that the plant expansion has become a reality, Fineline will acquire more equipment. “If you don’t have the floor space, you can wish all you want, but you can’t leave a new machine in the parking lot,” Miller says.

Current plans include the acquisition of a new pocket folder and box gluer, a diecutter and perhaps some equipment for vehicle wraps. Miller attended drupa to help him make his buying decisions.

It’s not just equipment that will fill the added space, though; an expanded IT department will be one of the biggest factors he hopes will contribute to business growth. Miller says that Fineline’s IT department has doubled in the past eight years and will continue to grow with the expansion.

It’s evident that if there is one thing that Miller is not afraid of, it’s Fineline’s transition to be a technology-focused company. As an integrated technology company, he explains, adding programmers has allowed Fineline to develop customized systems for its clients that help businesses comply with regulatory requirements.

Five years ago, Miller explains, the company began with an off-the-shelf EFI storefront, but Fineline realized it needed to develop its own version.

It began rolling out Finelink 2.0 to customers two months ago. The program gives clients easy web-based access to online editing and ordering, on-demand print approvals, asset management, shipping and e-commerce. Customers can easily access their jobs at any point, which Miller believes is crucial to strong customer relations.

“Clients want control of their brands, digital assets and print programs,” he says, “so we’re able to offer that and personalize it.”

Miller says that customer feedback on the digital storefront platform has been very positive and its user base continues to grow every day. Although it is primarily for in-house use at this point, he notes that he welcomes any printer that might need a partner for a customized platform.

Miller notes many print shops, large and small, had to close their doors during the Great Recession. It’s important, he stresses, that printers plan for those times and not overextend during the times of growth. “We should be reminded of things like that,” he says. “Save from the good times for the rainy days.”

While good financial prowess and foresight can’t hurt, one thing that Miller finds the most rewarding is building strong bonds with his employee base. The essential factor is strong communication company-wide.

Miller thinks of his employees as friends, as well as business partners. Some have worked at the company for more than 20 years. That includes Miller’s son, Ric Miller, who serves as VP of manufacturing and has been with the company since 1991.

“Without question, the most rewarding thing for me has been to work with my son for the past 25 years,” he says. He notes that, in all that time, they have never had a serious disagreement and that some day he will hand over Fineline to the younger Miller.

But that doesn’t mean he is going anywhere anytime soon. “I don’t want to retire,” Richard Miller laughs. “I’m still having too much fun running the business.” PI