Although John Falconetti is busy running a multimillion-dollar company, he still dedicates time to something he is very proud of: running a foundation to fight childhood obesity with his wife, former Olympic gymnast and seven-time medalist, Shannon Miller. The Shannon Miller Foundation was launched about a decade ago after Falconetti and Miller decided they wanted to give back.

“We took a step back and asked ourselves, ‘What is it that we feel passionately about and how can we use our professional and personal resources to make a difference?’” Falconetti recalls.

He explains that because his wife is a retired professional athlete, she had developed a thorough understanding of health and wellness — and also saw the need to combat childhood obesity. Together, they developed a program that supplements physical education in public schools by bringing in supervised activity and a curriculum that focuses on goal setting and accountability. A partnership with the public school system helps the foundation to serve approximately 10,000 students across Northeast Florida.

“We can objectively measure that the young men and women in the program are healthier today than they were before the program started,” he says. “Healthier children read at a higher level, they have higher graduation rates and they get into less trouble.”

At a time when the printing industry is alive with M&A activity, it’s something of a phenomenon when a company can look back at success and growth spanning more than 50 years, let alone nearly 80 years with three generations of family leadership. And yet, John Falconetti, CEO of Jacksonville, Fla.-based Drummond Press, sits behind the same desk that his father sat behind, as did his grandfather before him.

Drummond Press started with humble beginnings, growing as many traditional commercial printers do. And although the company has maintained the core values built by Falconetti’s grandparents, it looks very different from the business that was founded in 1939.

In 2012, Drummond Press made its first major investment outside of Florida with the acquisition of Atlanta-based Graphic Communications and, in 2015, the company furthered its footprint in the Atlanta market with the purchase of the print division of RGI, a data-driven marketing and print solutions provider in Marietta, Ga. Falconetti explains that to achieve its long-term goals, he knew that Drummond Press needed to rethink its approach to growth.The growth opportunities that the Atlanta region offered is what drew Falconetti in, but it seems that this is just the beginning of Drummond Press’ expansion.

“We are a company on the move,” Falconetti affirms. “We will continue to reinvest in our operations and, more importantly, in developing our people. Part of our strategy is to continue to remain aggressive from an acquisition standpoint.”

Besides its rapid expansion, Falconetti points to two specific turning points in Drummond’s decades-long history that changed the company’s ethos: the decision to embrace emerging technologies and to adopt Lean/Six Sigma manufacturing processes. Between 2006 and 2008, Falconetti’s realization that technology was going to redefine the industry provided the catalyst for change to his company’s business model and value proposition.

“We began looking at how we could integrate technology into our client-facing solutions, such as personalized URLs, mobile messaging and digital storefront applications. We realized that these tools become significantly more relevant to the customer when you focus on specific industries. We also started to appreciate the level of production efficiencies that could be created by integrating technology into our internal operations.”

During the past several years, Drummond Press has worked to develop what Paul Van Wie, president, calls a “multi-plant manufacturing platform.” The plan is focused on delivering a highly effective, single-source solution for the markets that Drummond serves, according to Van Wie. Verticals include retail point-of-sale, education, manufacturing and healthcare.

Within its Jacksonville and Atlanta facilities, Drummond Press offers sheetfed offset, web offset and small- and wide-format digital printing, as well as mailing and fulfillment services. And although the company has made recent investments in Ricoh, Kodak and EFI products, Van Wie explains that it’s the new EFI VUTEk HS125 wide-format press that the team is most excited about. The hybrid rollfed/flatbed UV printer is expected to provide clients with higher quality products at an improved time to market. 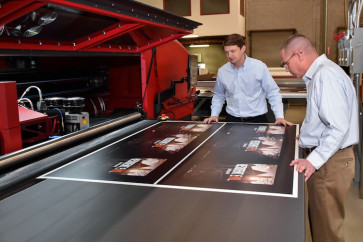 Stephen Horne, president of the company’s Atlanta division, points out that it was approximately two years ago when the company made the decision to further its investments into wide-format digital output capabilities, as well as its big data-driven direct mail programs and fulfillment operations. These investments squarely support Drummond’s rapidly growing offerings in the vertical markets on which the company is focused. Drummond Press is also exploring the addition of continuous-feed inkjet printing capabilities, Van Wie reveals.

Lean/Six Sigma Manufacturing
It was around the same time when Drummond realized its future included a heavy investment in new capabilities that it adopted a Lean/Six Sigma approach to manufacturing, something that would forever change the deeply rooted company culture. The decision was made based on a belief that workflows and processes could be made more efficient through continuous improvement, Falconetti explains.

“We brought in a coach to help train all of our team members on basic methodologies that helped us understand the different kinds of problem-solving techniques that are found in a Lean/Six Sigma approach,” he says. As part of the Lean/Six Sigma culture, everyone receives client-focused training and understands the concept of building customer loyalty, including the business development, account management and manufacturing teams.

But it’s the company’s core values that really stand out as the perfect complement to a Lean/Six Sigma approach. If there’s one thing that the Drummond Press management team stresses, it is an unwavering commitment to provide clients with innovative and unique solutions to their most challenging needs. To address those challenges, Drummond Press strives to be proactive.

Van Wie explains that being proactive is a key step in developing system-wide best practices to make sure that everything stays in control and everyone is in sync. By catering to a short list of specific industries, Drummond Press has the opportunity to better understand a client’s workflows and needs, which enables the company to understand the customer’s “operating reality” and proactively manage its client relationships.

“Our sales process is built on an approach that drives discipline and high-level, consultative conversations. This enables us to rapidly understand clients’ needs and provide solutions that add significant value to our customers,” Falconetti points out.

Drummond Press is unique in that it is one of the few companies to earn a “Best of Print & Digital” award for two consecutive years. The customer loyalty awards are given as part of a partnership between Butler Street, a provider of client research, and Printing Impressions. Surveys are distributed to clients who rate their overall satisfaction based on whether or not they would refer the company to friends or colleagues. Customer responses to this question are given on a scale of one to 10, a process that determines the company’s Net Promoter Score.

Value of Constant Client Engagement
Falconetti explains that Drummond Press became involved in the Best of Print & Digital program because he wanted a way to benchmark his company against its competitors to encourage employee accountability. But Drummond Press doesn’t just see this accolade as a notch on the company’s belt; it uses the client survey and Net Promoter Score to actively listen and engage with customers. Every client who responds to the survey is contacted by a Drummond Press team member to thank them and to ask what is being done right and what could be improved. This constant engagement and open conversation with clients allows Drummond Press to continuously evaluate its progress. 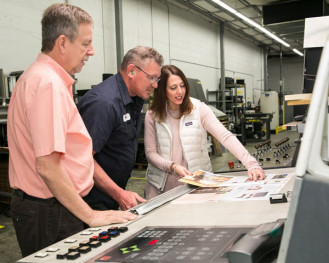 It’s not just a focus on engagement and open conversation with clients that makes the company successful; Drummond management also seeks to facilitate an open dialogue with all of its 110 employees. Suggestions and ideas from team members are always encouraged, which supports its legacy of being a family built and run business.

“We’re a family company with a capital ‘F,’” Falconetti stresses. “We invest in the people who work around us and try to promote a very healthy level of competition.”

“But it’s not just about the sales team,” he says. “We also invest in our customer service and manufacturing teams because we believe that employee development is critical to the long-term success of the company.”

Color Consistency Across All Platforms
Although sales success is critical, efficient and consistent manufacturing processes are just as crucial to a printing company’s success. As part of its Lean manufacturing processes to standardize, reduce waste and continually improve, Drummond Press is able to manage consistency across its multiple output platforms and facilities.

“We are G7 Master Printer qualified in both manufacturing locations,” Van Wie explains. “And we are constantly monitoring that on a quarterly basis and making sure we adhere to those standards.”

Falconetti continues, “Creating a process-driven environment in and of itself eliminates variations. And when you’re strategic and constantly looking around the corner, you avoid roadblocks, such as color consistency, that might otherwise creep into the environment if it went unchecked.” 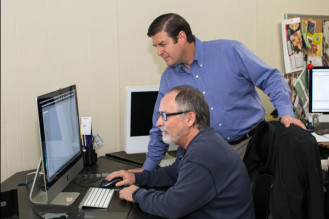 John Falconetti looks over a job in production.

The manufacturing and management prowess that Drummond Press possesses is driven by what Falconetti describes as a “strategic visioning process.” The company has developed one-, three- and five-year plans that are broken down into varying levels of detail. The five-year plan, as Falconetti illustrates it, is more of a 40,000-ft., long-range forecast for the company and where it wants to be in terms of profitability and strategic acquisitions. The one-year plan, however, is much more detailed.

“That’s when we start to identify five to seven specific, detailed goals that are measurable and accountable,” he says. “The goals that we establish are collectively developed, approved and embraced by the management team, and then we go out and execute them on a day-to-day basis to move us toward our long range goals.”

One of Drummond Press’ long-term goals is to continue external growth through M&A activity, fueled by industry consolidation trends. “We will continue to see a contraction in the number of industry providers … 15,000-20,000 will be participatory in this consolidation through acquisitions or rollups,” Falconetti predicts. “One of our three- to five-year goals is the addition of a third production facility, which would support a more sophisticated distribution strategy.”

With the addition of more production space in new geographic markets and by embracing new technology offerings, Drummond has been enjoying annual growth rates over the past five years that are 18 times greater than the industry average.

“We see that growth trend continuing, given what we see for 2017 and based on the opportunities that we’re selling into for 2018,” Falconetti concludes. “We’re challenging ourselves to maintain a 20% year-over-year growth rate, and I’m confident we’ll be able to continue to do that.”

END_OF_DOCUMENT_TOKEN_TO_BE_REPLACED
Happening Today
The Powerful Case for US Book Manufacturing