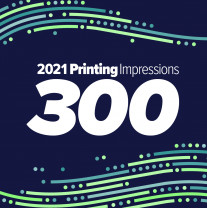 The summary of Alexander's Print Advantage that follows recognizes this company as a “fast-track” firm that has weathered the recent storm in its own way, and its insight on business and industry trends can serve as a “north star” for companies looking to navigate themselves toward a safer harbor.

Jeff Alexander, president and owner of Alexander’s Print Advantage, describes his operation as “an on-demand company.” As an all-digital printing company powered mostly by a fleet of HP Indigo printers, the company’s customer base, says Alexander, is primarily companies serving the mass-customization market through app-based design and production. Images and bundled content are channeled through the company’s own production software, and are then batched, printed, bound, and shipped by the company. Product areas served by the company include photo books, photo products, invitations, art books, and children’s books — all produced using a “one-off model.”

Like many companies operating somewhere beyond a standard print-for-pay model, Alexander’s Print Advantage has focused strongly on the value adds that both differentiate the company and give it the capabilities to effectively serve its need-specific product areas. Much of this, says Alexander, is through the in-house development of software solutions to handle and track jobs as they move through the plant. “We have six developers on staff, and have had staff like this for 10 years,” he says, adding the company has had its tech team in place since 2000.

Alexander credits much of the company’s ongoing success to “the advancements we’ve made and the fact that we’ve grown into them.” Company growth has been steady over the past six years, he says, and it is on a continued trajectory for success.

To date, Alexander’s Print Advantage has not faced significant shortages of materials, though Alexander adds that “the possibility is there.” He says the company has been working hard to manage its suppliers, and he reports he has more people involved in that endeavor than ever before. The need for supplies becomes particularly acute at the end of each year, he says, when the personalized products market sees a significant holiday spike.

While Alexander says the company is currently well-staffed, he also notes it is looking to hire, and has added additional person-power to employee recruitment. Like many companies facing labor shortages in general, and skilled labor shortages specifically, Alexander says his company will continue to explore software development and automation to streamline production.

About the future of his business, Alexander says he continues to monitor developments in printing as a way to track a future path.

“We are not the average commercial printer,” he says, stressing the fact that its core competency is “short-run, value-add. We will continue to look for markets where we can add value.”

He adds that once-novel technologies such as Web-to-print tend to fade over time, as more players enter those spaces and their uniqueness is rendered commonplace. While he says the space his company serves currently has fewer competitors, it is still quite competitive.

Why Are Salespeople So Frightened to Negotiate?

Are You Sure You Want to Quote That Print Job?