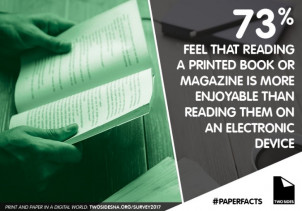 The recent Toluna survey commissioned by Two Sides showed that 62% of U.S. consumers between the ages of 18 to 55+ preferred to read books in print versus electronic devices, including 63% of the youngest age group (18- to 24-year-olds). Both groups strongly agreed (72-73%) that reading a printed book is more enjoyable than reading a book on an electronic device.

Reading magazines showed a difference between the overall consumer response (66%) and the 18- to 24-year-olds (56%) although both still prefer print to digital. When asked if reading a printed magazine is more enjoyable than reading a magazine on an electronic device, the overall response was 73% and the younger group response was 66%.

Clearly, many of us enjoy reading in print when it comes to books and magazines, but the survey showed that news consumption habits are changing.

The younger the reader, the more likely they are reading news on e-devices, with only 35% of the 18- to 24-year-olds preferring to read newspapers in print (versus digital) while the overall response was 61% in favor of print. However, when consumers were asked if reading a printed newspaper is more enjoyable than reading a newspaper on an electronic device, the responses were higher: 56% for the younger age group and 65% overall.

When asked if reading news in a printed newspaper provides a deeper understanding of the story, the overall response (71%), was very similar to the response of the younger age group (68%).

According to recent studies in the United States and Norway, participants read faster online and thought they understood better than when reading in print but in fact, their overall comprehension was better for print. While it was no problem to get the main idea of the text when reading online, for specific questions, students answered more accurately when they read printed texts.  For example, those who read in print gave more correct answers to questions having to do with the timing of an event in the text or how long it lasted than those who had read the story on a Kindle.

Evidence of consumer enjoyment of printed media is even evident at a very young age. The New York Times tried out a print-only section for kids in May 2017 which included sports, national news, food, opinion and arts and mimicked regular sections in the paper. The Kids section was so popular that the NYT will start producing it monthly in January 2018. Meanwhile, in the UK, a weekly full-color tabloid for seven- to 14-year-olds called First News has been enjoying year-on-year growth for the past five years.

The full global survey report and key U.S. findings can be accessed at: http://twosidesna.org/Survey2017.

For a free print copy of the report, contact Two Sides at info@twosidesna.org.