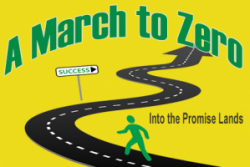 You would think a march to zero was a march into hell itself, hearing the whimpering of those who attempt the journey. To be fair, we should report only a few rare birds get close to zero, and those who are able to sustain percentages close to zero.

Keep in mind, every march begins with a first step, and then a second step. One step at a time. Fixing each error and miscommunication permanently requires addressing one non-conformance at a time, coupled with implementing or updating one system at a time that addresses each non-conforming event.

Zero Is Impossible Says the Faint of Heart

Over the past couple of decades, we’ve work with thousands of explorers looking for that Celestial Turnkey City via “Easy Street.” To be clear, there is NO “Easy Street.” In fact, the road out of the land of chaos to that Celestial City is bumpy. Moreover, the road is filled with opposition from employees, vendors, and even family.

In addition, the road is littered with obstacles, like spending long hours seeking root causes and solutions for errors and miscommunications. However, with each root cause identified and solution mapped out, the “land of promise” grows closer.

The intention is that non-conformance of ten percent falls to nine percent, and on down to zero percent in due time.

To be sure, the faint of heart will say achieving zero percent in errors and miscommunications, those non-conforming events plaguing businesses, is IMPOSSIBLE.

When achieving a goal of zero errors in business operations, or sustaining errors close to zero, you arrive at that “Celestial City,” aka, THE TURNKEY CITY of TOTAL ORDER.

Whereby, peace reigns and owners and managers spend more time growing the business rather than fighting fires of chaos.

Did I mention? Great systems work for those not faint of heart!

Fix What You Have First

7 Questions to Evaluate Customers and Prospects