Commentary: Long Trip Down Memory Lane of Covering the Printing Industry for 40 Years

It's hard to believe the calendar has advanced to 2022 ... a year in which, hopefully, the pandemic captures fewer daily news headlines and our industry regains some sense of normalcy. January 2022 also marked my 40th anniversary of employment at NAPCO Media (formerly called North American Publishing Co.). Working for one company almost an entire career (only my second job out of college) is, admittedly, a milestone few people reach, but certainly one for which I have no regrets. 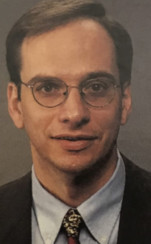 My editor's photo several years ago, back when paisely ties made a brief comeback.

People have asked me over the years how I could essentially perform the same job, serving as editor-in-chief of a trade publication, for four decades. My truthful response: Although my job title hasn’t changed, the requirements of the position continues to change in lock step with the technological evolution of the printing and publishing industries. 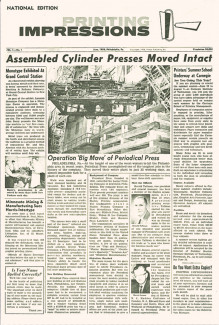 The first issue of Printing Impressions was published in a newspaper format in June 1958 — hence its evolution into a tabloid-size magazine.

For many years, prior to the advent of the internet, the focus was solely on our monthly print edition. We were in a dog fight for decades, battling it out with Graphic Arts Monthly and American Printer for advertising dollars and the number of BPA-audited copies sent out to printing execs each month (nearly 100,000). Those magazines, owned by large publishing conglomerates, had deep roots that went back much further than 1958, when Printing Impressions was founded by Irvin J. Borowsky.

Fast-forward to today and, while the printed publication is still very important, we adhere to a digital-first strategy largely driven by our daily e-newsletter and website (PIworld.com). Unique content is delivered via videos, webinars, and other e-learning initiatives as well. We’ve also evolved into an events organization. It’s hard to believe that this April will mark the 10th annual Inkjet Summit, and we’ve successfully launched the Wide-format Summit.

I had a lot more hair when my head shot appeared in the NAPCO newsletter as a new hire in 1982.

Back in 1982, when I started, we were still sending typewriter-written content to outside typesetting specialists, who in turn sent us back galleys to proofread. Our initial typesetter still used hot metal type, which was outdated even then. That firm went out of business because it could no longer source the needed repair parts or find replacement operators.

We also relied on color separation houses — especially to produce our front covers — which operated then-expensive Color Electronic Prepress Systems (CEPS) to combine artwork and perform manipulations that can be done today on a Mac computer with a few clicks.

Working in tandem with a staff of paste-up artists armed with t-squares and X-acto knives at their drafting tables, we produced camera-ready mechanical boards for every editorial page. Many a night, I would go home with random letters and strips of repro that had gone through the waxing machine stuck to my clothes and the bottom of my shoes.

We overnighted completed issues to our print providers over the years, including Mack Printing, Maxwell Graphics, and Banta, among others, which mailed us bluelines to proof.

Looking back, I’m still amazed we actually had the time to create editorial content for the printed magazine, given that so much time and effort went into the actual manufacturing process for overall page production and Velox halftones. 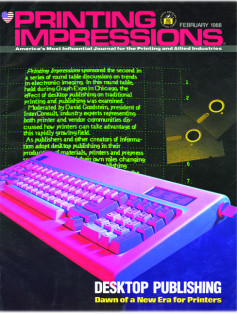 Our February 1988 edition focused on how desktop publishing was changing the printing and typesetting industries.

The same evolution of process steps can be said of the printing industry itself. During my career, I’ve witnessed the impacts of the conversion of conventional platemaking to computer-to-plate (CTP) workflows; the advent of the internet and desktop publishing; computerized control systems enabling fast makereadies and real-time quality control; the impact of Web-to-print and digital storefront workflows; and the mainstream adoption of on-demand, often personalized, digital printing, partly at the expense of offset print production.

These technological marvels all caused seminal industry shifts, and redefined or eliminated entire production processes. In some cases, they even displaced entire industry segments, such as typesetting houses and prepress service bureaus.

I can’t even imagine what technological changes inkjet printing will drive in the future, whether it be commercial, packaging, and wide-format applications, industrial and décor printing segments, textiles, or other areas. The pace of change and product development life cycles will also move faster, not slower.

I only wish I could stick around 40 years from now to watch the seemingly unimaginable become imaginable. Despite all the naysayers, printing truly is a sunrise, not a sunset, industry.