Why LEAN Fails 98% of the Time 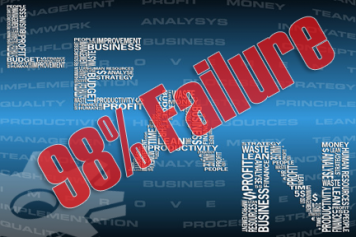 I spoke at a Continual Improvement Conference in Lexington Ky., several years ago. Sharing speaker billing with specialists who regularly implement and train companies on the virtues of LEAN, was a privilege. I especially appreciated meeting these Lean authorities and watching their presentations!

The topic of my own presentation was The Innumerable Benefits of Systemization and why business systems like Lean often fail.

During my Q&A time, a man in the audience asked me about Lean. He particularly wanted to know about a system I had developed for our company, called “The 100% System of Cleanliness.”  I don’t remember the question exactly, but I do remember referring part of it to one of the Lean experts, who attended my seminar.

I asked the Lean expert (in front of 100+ business professionals) about the average success rate of Lean implementation. His honest answer left me nearly speechless. “Less than ten percent,” he said.  I probably asked a few other dumb questions, trying not to look so shocked. Surely, I thought, this can’t be right!  However, I actually had written a blog about The Dark Side of Lean.

Since then, I’ve spoken with other Lean professionals, including Paul Akers. He is, in my opinion, one of the leading proponents of Lean. Paul informed me that, “98% of Lean culture implementation fails.”

The Main Reason Why Lean Fails

The main reason for Lean failure is the same reason most ALL system implementation fails. It’s not complicated really, when you have the discipline and the correct tool.

The reason so many systems fail is — they don’t have a great FOLLOW-UP system!

When I first started to systemize our business, in the 1990’s, I ran head-on into a brick wall of system failure. I would implement a system (i.e. quality control), and as soon as I turned my attention to another system, the prior system would fail. Employees in our company just stopped using the system as it was designed.

I don’t mind telling you that, at times, I wanted to throw in the towel. However, I had the discipline to sit down, analyze what went wrong, and get back in the fight. The light bulb would always come on when I stayed the course. Finally, I realized I needed a great follow-up system to ensure ALL systems were working as designed.

Six Sigma Lean uses live personnel audits to stave off and battle system failure. The main problem I see with that—for the 98% failure rate—is that audits are not done daily or ongoing minute-by-minute.

Furthermore, employees are often tipped off as to when, or approximately when, an audit will be conducted. This is NOT GOOD, because the auditee can always get ready by simply fixing things before the auditor arrives. In fact, I’ve been told that is more the norm than the exception.

If a non-conformance, error, system failure, or miscommunication occurs, anyone in the organization, at any time, can submit a System Buster Locator / Corrective Action, explaining what the failed action is. This action can be submitted in about one minute. With the submission, management is immediately alerted about the problem or non-conformance. Then they can act quickly to fix the issue. If it is not an emergency, they can choose to administer the System Busting Action later.

Administering the action entails finding the root cause, knowing all the people involved, cost in time and money, and what current system was involved, i.e. a control checklist. Management then needs to further investigate to find out if the failed action was a “System Error” or a “Personal Error.”

A SYSTEM ERROR simply means, there’s NO system in place, or an existing system needs a prompt that would inform a person to do or not do something, i.e. a process or task.

A PERSONAL ERROR simply means, there IS a system in place with a prompt that informed a person to do or not do something, and they failed to heed the prompt.

More Secret Sauce for Why the System Buster Locator Works

Read very carefully here, you must get this!

Here it is! Accountability!

When an employee signs their first System Buster Locator, they now understand that the company has a follow-up system, which will hold them accountable for properly using all systems assigned to them.

Can you see it? This will include Lean Systems.

Now, let’s say for example, someone is responsible for putting all the tools they use daily back in their designated location, which is part of a Lean system. Then, if a manager or another employee sees the tools are not put back in place after they’ve been used, they can simply submit a System Buster Locator/Corrective Action.

With the disciplined use of this one system, ALL systems continue to operate as designed.

How do I know? We’ve done it in our company, year after year, and it works!

Fixing Business Disorganization: Do the Math