Technology Trends from the InfoBlog
November 10, 2017

Jetrion Returns to Flint, Sort Of

Back in 2006, EFI acquired the Jetrion inkjet label printer business from Flint Group, which had developed the technology to expand beyond their traditional foothold in ink. At that time EFI was on a major push to expand into inkjet-driven hardware which was viewed as a growth engine beyond its Fiery and software businesses.

EFI paid around $40 million in cash for the Jetrion business which was expected to post between $16-$18 million in annual turnover. After 11 years of less than expected growth, EFI announced an exclusive partnership for Jetrion label presses with Xeikon, a Flint Group company.

The agreement was reached after several months of negotiation, with the first hint of EFI’s decision to “exit the label market” given a week before by Guy Gecht during EFI’s most recent Q3 earnings call. Effectively, EFI is licensing the Jetrion brand while retaining control of the intellectual property and Jetrion ink business. Xeikon picks up the sales and service. 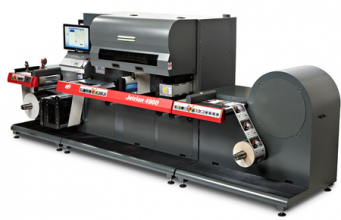 The Impact for EFI
The deal is a short-term win for EFI as the company retains the intellectual property rights and keeps the recurring revenue from the ink and, presumably, Fiery. EFI also gets to clear its financial books from an underperforming division. Gecht stated that 2016 Q3 Jetrion printer sales were $4 million which would not average to the $16-$18 million annual revenue expected after the acquisition back in 2006.

The competitive market for inkjet-based digital label presses has also changed significantly over the last 11 years. There are more vendors competing in a more mature digital label market which has impacted the ability to place machines with just over 200 Jetrions installed globally to date.

In the long-term there are still uncertainties. Customers and prospects take notice when an underperforming division is jettisoned, creating uncertainty as to the future commitment to other divisions. EFI clearly stated that growth markets in corrugated and industrial printing are a primary focus.

Could other divisions, like VUTEk, follow suit? In the Q3 financial call, the company noted a slowing of ink growth volume for its VUTEk line of printers which is an indicator of the end customer’s print volumes. There is always the possibility, but Keypoint Intelligence thinks it highly unlikely until other areas of the industrial inkjet division reach sizable revenue.

The material impact to the rest of the EFI ecosystem, for Fiery but also for Productivity Software solutions, is also unknown. Initial feedback indicates that Fiery will be the digital front end (DFE) for future sales, but Xeikon also has its own DFE. Does the change in sales and service reduce the potential pipeline for other productivity software, such as Digital StoreFront or Radius? Probably not due to the limited install base.

The Impact for Xeikon
HP and Xeikon dominate the digital label market, but both are leveraged to electrophotographic technology. The new agreement with EFI gives Xeikon a further expansion in UV-based label printers to complement its PX3000 Panther press announced earlier this year. The company can also leverage the existing Jetrion install base netting a greater presence in North American.

The company indicated that there will not be any immediate changes for customers, but there is opportunity for Xeikon to leverage some of its existing technology going forward. There are opportunities to have the Flint Group’s ink companies involved with the ink component of Jetrion. Xeikon has developed its X-800 DFE platform with an emphasis on label production and uses it for all other equipment, including Panther, although the company reiterated plans for the Jetrion line to be powered by EFI Fiery. Other lessons learned during the development of Panther could also be leveraged to retool and even expand the existing Jetrion line.

Final Thoughts
The greatest initial benefactor to the agreement will be existing Jetrion customers who will see expanded service and support from Xeikon, which has been at the forefront of digital label production for many years. Users will also be able to join Xeikon’s business development program aXelerate, which helps label converters build applications and sell digital output to grow their business.

Solimar Systems is a Sponsor of Inkjet Summit

Showcase on the ColorStream Series of Inkjet Presses