I think we Americans have very special abilities in advertising, most notably in print advertising. We have a knack for getting people to buy something by reaching out with print. One of the most obvious skills in this direction is direct mail, for which we seem very creative. I’m not sure why, but no other country that I have lived in is as creative with direct mail as we are. Germans seem to use standardized sizes for their mail pieces, mostly cards and brochures. Chinese people don’t use direct mail at all because virtually no one uses a mailbox. Direct mail was a vital differentiator for my stone paper business, and I’d like to share a little American story of how I got my business running with international direct mail on stone paper.

When I first started my printing career, I actually came up with a bunch of different direct mail campaigns for RR Donnelley Shenzhen for their European customers, like some kind of American instinct. When I first started my business, it was my nature that immediately made me think about direct mail again. In order for people to understand the value of stone paper, they had to hold it in their hands. The real challenge, though, was that I had almost no money and no real business yet. I didn’t really even have that much experience printing things outside of printing school. 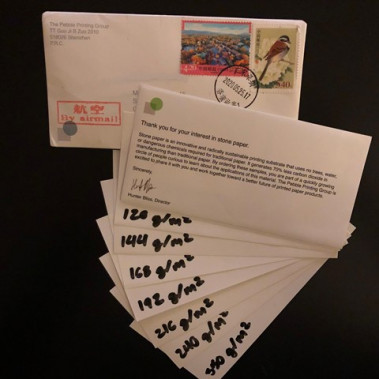 My first ever direct mail campaign went out to my good friends in Germany and some old clients that I don’t really remember anymore. I sent my first batch of letters using China Post. Nowadays people use modern domestic services to send mail, so for letters, China Post has become something like telegraph or morse code by our standards. When I went to their shop and asked them to send a number of letters to Germany (and Australia, I think), they looked absolutely confused and handed me a booklet of stamps. On the front of these letters with stone paper samples, I had to apply massive Chinese government stamps as postage. How did I apply them? Well, of course with a horse hair brush and warm glue like something out of an ancient Chinese TV series. The final letters were practically dripping with mystery glue. They took two weeks to arrive in Germany, and around two months to arrive in Australia. As you can see, they arrived complete with a lot of Chinese markings. However, it only cost me a few dollars total. That was my first ever direct mail campaign. It was an effort, but it would not generate significant business.

I spoke for a while with an industry friend about a more commercial scale project. He advised me to target a small market, so I could limit the damage to my reputation if I made mistakes during printing. I also knew I needed to find customers who could receive my products quickly, and who could speak English.

Looking at the map, I decided my first campaign would go to New Zealand. Shipping times were only two weeks from Shenzhen, they speak English, they have cozy little publishing and packaging industries, and they clearly care about sustainability. My next step was to understand more about their industries so I knew who the players were and where they were located. I identified their official Publishing Association, and took note of their members. Then I found some organizations doing FMCG (fast moving consumer goods) because I knew their members would be purchasing packages. In total, I identified around 200 companies for which stone paper could be relevant. I hired my friend to help me gather the addresses from their websites, and find the relevant contact persons via LinkedIn. With all of that information, I had enough to make an excel spreadsheet to be imported into InDesign.

The data gathering was simple enough. Then came the design of the envelopes. For consistency, I wanted envelopes made of stone paper as well as the interior samples. Like any other campaign, each envelope would need the printed information from the excel sheet I made. This meant variable data printing. This was an issue because variable data printing usually means something like digital inkjet. Digital inkjet is a problem because stone paper does not absorb water-based inks. Not only this, but it would be expensive to cut the paper and run 200 sheets through a commercial digital printer, especially if it was going to be UV digital.

I’d like to toot my own horn a little bit about the solution I came up with. Previously, all of the stone paper I had for customer samples were delivered as A4 stacks. It was clear to me that I would need to use my deskjet printer to do the variable data printing, and somehow I would need to convert the A4 papers into envelopes. 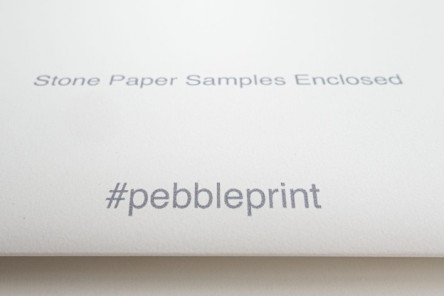 First, I found this origami video that explained how to fold an A4 sheet into a small envelope. It was somewhat complicated, but since these would be folded by hand, it was doable. This format meant I could use my deskjet printer at least.

Second, there had to be a way to print stone paper with the heavy water-based inks from my printer. In general, stone paper has long drying times. With water based inkjet inks, it may take days. I thought about this, and I realized I could use my microwave to dry the inks without any forceful pushing from a blow dryer. I stuck a test envelope in the microwave for around 15 seconds, and the smudging was reduced somewhat. But it still wasn’t postable. I then thought about the solvent-based varnish that we use in offset printing for stone paper, and I looked up the ingredients in that. I found a similar solution as spray varnish at a hardware store, and tried that. I gently sprayed the varnish onto the few printed areas on the envelope, and allowed it a few minutes to dry. Doing both of these steps, I had created usable stone paper envelopes printed in water-based inkjet from my desktop printer. It was a success! 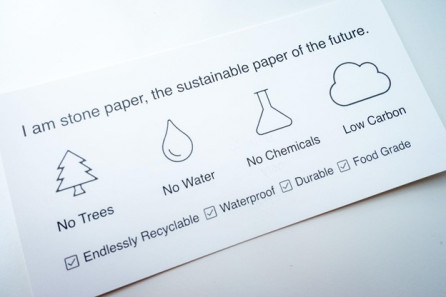 For the samples inside the envelopes, I had the following: Every weight of stone paper, solid color graphics, pictures, and a foil stamping sample. These components, which were basically very small cards done in offset, were sponsored by my stone paper partner. Labels were written on the individual weight cards with a marker.

That basically formed the basis of my first stone paper campaign that won me significant business. Over the course of a week, I printed, folded, and stuffed the envelopes with my girlfriend on our living room table. They fit very neatly into a small box, and were shipped to a direct mail distributor in New Zealand for postage (a very simple stamp) and delivery. After two weeks, I followed up with the members of the list via email and telephone. I have to say, cold calling is overrated for trade printing. 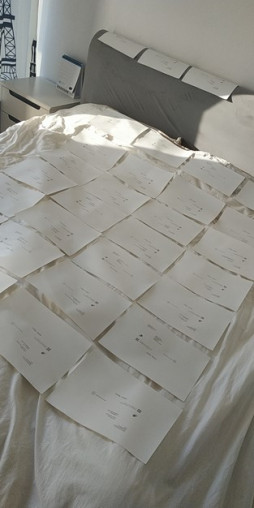 The final response rate of my first campaign was 15%, and I had spent around $300. Two notable clients came from that campaign, one being a small book publisher and another doing packaging for body balms. The book publisher was my first stone paper publishing product, and we still maintain a very good relationship. She is really a dream client, being patient and enthusiastic about innovation. Her order alone made my ROI around 600%, and more than anything, gave me hope that my business could succeed. The packaging client, who was asking for 100% stone paper cylindrical containers, would have made my ROI over 4,000%. He was planning on switching to paper containers from his plastic (PP) containers, and we discovered stone paper was better at holding the moisture of his balms. After making his first prototype, I realized our solution was not as sustainable as his previous plastic container, and I declined his work. In retrospect, I regret my decision somewhat, but I was operating on my principles.

Finally, after getting a little in the groove of the direct mail campaigns and the stone paper workflow with other products, I took the campaign to the next level of creativity. This time I wanted to go to Australia, since it was still an English-speaking country with fast shipping from China.

For the Australian campaign, the process was similar. I hired a more affordable freelancer to help me with data mining and focused purely on Australian publishers. This market was much larger than New Zealand I discovered, with 142 great publishers alone. She provided me with an excel spreadsheet, and I introduced myself to all LinkedIn contacts early. It was mainly publishers and purchasing directors for Australian publishing houses.

The big difference with this campaign was the preparation. I recorded an introduction video of myself, and put together a secret web page for the recipients that showcased our product as well as attractive offers especially for them. The video was linked to a QR code on the envelopes. 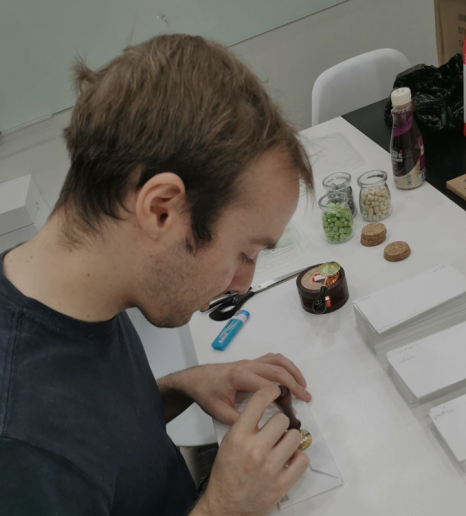 The second difference was the use of hand sealed wax stamps to give the stone paper envelopes an extra high-end feel. I basically purchased a small wax stamping kit online, and used that to seal the envelopes instead of glue. Here there was a little obstacle: the small candle and wax pot were definitely not big enough for the 150 letters we sent out, and we were sitting around for a long time watching wax melt. 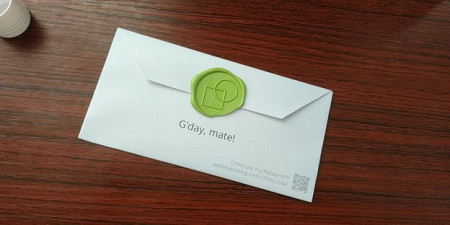 The results of this campaign are where we stand now. The letters were received in late July 2021, with a slightly lower rate of interest than the New Zealand campaign. But the respondents were very respectable publishers, which is exciting! The anticipated ROI on this $500 campaign is around 1,000%. The first order will be going to print in early November, Australia’s first stone paper children’s book and our first major project with a mid-sized publisher. Another children’s book is expected from another large publisher there, and further samples have been requested by the largest independent publisher on their market. It’s safe to say that this campaign impressed and opened some great sales opportunities for trade printing.

I hope this little story entertained you, and showed you a little bit of what’s possible with direct mail marketing. Even on a mysterious material like stone paper, trying to market to people across oceans, direct mail is still the way to go. Future permitting, it would be a dream to get this material into the hands of all printing players in the United States with a fun envelope campaign like I’ve done now. Hopefully the first campaign will be done on American stone paper. 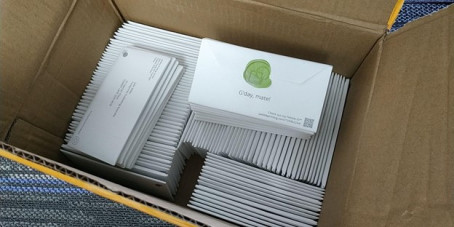 Hunter Bliss is the founder and CEO of Pebble Printing Group, a printer specializing in sustainable innovation. Pebble Printing Group is a leading innovator in stone paper material, as well other circular solutions for traditional publishing and packaging print. Hunter is from South Carolina, was educated as a printer in Germany, and founded his company in Shenzhen, China.