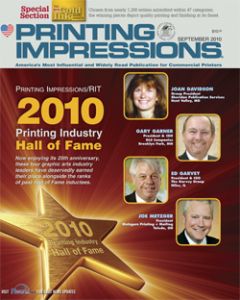 Ed Garvey, president and CEO of Niles, IL-based The Garvey Group, took the helm of his family-owned business following the sudden death of his father, and has transformed it from a $1.2 million business forms provider with about a dozen employees to a $40 million performer employing 175 people in four locations.

Garner, the president and CEO of GLS Companies, came from modest means and toiled his way to the top, making his success tale even more dramatic, and his selection into the 2010 Printing Impressions/RIT Printing Industry Hall of Fame a fait accompli.

Ask anyone  who knows Joan  Davidson, and they will tell you that she has a lot on the ball—an excellent work ethic, top-notch people skills, a strong manager and a positive leader. But she'll be the first to admit that when it comes to patience...well, let's just say she's still working on that.

Look up infectious enthusiasm in the dictionary, and you might find a picture of Joe Metzger. The president of Toledo, OH-based Metzgers Printing + Mailing has a legendary penchant for getting people excited about anything related to the printing industry, particularly new technologies that can benefit his customers and enable the company to add another dimension to its offerings.

Horseshoes Star a Dead Ringer for a Printer —Cagle

The printing industry can also count as its own the greatest horseshoe hurler in the history of the sport. Not just the best at the moment...the greatest, ever. His name is Alan Francis, and the man truly gives meaning to the term "ringer." Francis has captured an astounding 16 National Horseshoe Pitchers Association world titles, including the last eight consecutively.

Inaugural InterACT! Conference Is a Hit

For the most part, coated and uncoated offset papers run reasonably well on toner-based digital systems but, with inkjet, it's a whole different ball game. Inkjet inks have a high water content, and tend to soak into uncoated papers or sit up on coated papers where they may smear.

Dr. Hans-Bernhard  Bolza-Schünemann, former longtime president of Koenig & Bauer AG (KBA), died on July 23 at the age of 84. Dr. Bolza-Schünemann left his mark as a popular senior executive and a respected figure in the German engineering industry.

Killed Worker May Have Saved Others

A forklift explosion at Quad/Graphics' printing facility here claimed the life of its operator, The Dickson Herald reported, but the actions he took prior to the explosion may have saved the lives of countless other employees. Bruce Mitchell, a stacker for the company, died Aug. 13 after sustaining injuries in the explosion, which caused burns across 98 percent of his body, the paper said.

Lessons from the Gridiron —Farquharson/Tedsco

You might be asking, "Football? Isn't this column supposed to be about print revenue growth in a turbulent economy?" Sure, but good football teams and good printing businesses have a lot in common. Take a knee and listen to this pep talk from Coaches Ted and Farq on some smart ideas that drive success on the field and in clients' offices. Otherwise, drop to the ground and give us 20! Now!

The Affordable Mail Alliance (AMA) has implored the Postal Regulatory Commission to dismiss the U.S. Postal Service's (USPS) recent rate hike proposal, arguing that it violates the cost controls Congress put into law to protect consumers, and that the USPS needs to cut costs and modernize rather than raise rates an average of 10 times the rate of inflation.

It's hard to believe that this year's Printing Impressions/RIT Printing Industry Hall of Fame ceremony, held in conjunction with GRAPH EXPO in Chicago next month, will be our 25th annual induction class. That first Hall of Fame group in 1985, coincidentally, marks  the same year I was named editor-in-chief of the magazine. While  the Printing…

I was asked to spend some time with some printing company owners recently. The conversation eventually shifted to why many print salespeople seem to reach a level of contentment and stop prospecting for new accounts. Big problem!

The consolidation phase of the Worldcolor integration has begun at Quad/Graphics. Five plants will be closed by the end of 2010, resulting in the loss of roughly 2,200 jobs. Most of the equipment from those facilities will be shut down and scrapped, removing excess capacity.

The first step is to determine what you want to accomplish with a print e-commerce offering. Think of it as a needs assessment for your shop, but, more importantly, for your customers. Would it make your clients' lives easier to be able to order print projects on a self-service basis (that's ultimately what most consumer-based, e-commerce stores offer)?