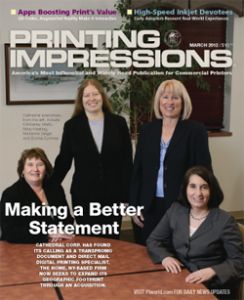 Aspirations to Never Give Up –DeWese

It’s happened to all of us. While sitting around having a drink with a few people, I start telling a story. The group is laughing their asses off and one of ’em says to me, “You really oughta write a book.”

Cathedral is a $25 million provider of direct mail and transactional/promotional (transpromo) printing that is demonstrating the ability to lead by example and adopting the latest in digital printing technology, including a Xerox CiPress 500 waterless inkjet production press.

A group of industry leaders convened to discuss the unification of the Printing Industries of America (PIA) and the National Association for Printing Leadership (NAPL). The group reached a unanimous consensus to move forward with a plan.

Edwards Brothers and Malloy Inc., two prominent book manufacturers based here, merged on Feb. 6. The new firm is called Edwards Brothers Malloy and has combined sales of $115 million, making it the sixth largest book printer in the United States.

Now that some of the early adopters of inkjet production presses have had a chance to shake out the jitters, where do things stand? What drove these companies to jump in early and what has their experience been?

The humble postcard has occupied a sentimental role in Americana, and though its diminished role may have evolved over the years, it continues to offer both artistic and cultural relevance. A fine example of this lies in Lake County, IL, where the Lake County Discover Museum houses the Curt Teich (as in tyke) Postcard Archives.

A Mississippi representative has been told to repay the state nearly $350,000 in public printing contracts that were awarded to his family printing business and to pay a $50,000 fine for the dealings, the Clarion Ledger reported. The accused lawmaker, Republican Rep. Kevin McGee, is one of several family members who own Service Printers.

The use of mobile technologies—such as 2D barcodes, tags and Augmented Reality—by consumers is, at the moment, relatively limited. Marketers, advertisers and publishers realize this, but they are also aware that, in the not too distant future, that will change.

"My business is terrible. The buying environment is worse now than at any time I can ever remember. I leave messages, but no one is returning my calls. Clients are killing me on price and customer loyalty is a contradiction in terms. If things continue as they are, I will not be able to compete."

The Occupational Safety and Health Administration (OHSA) has ordered the reinstatement of a truck driver employed by Rowan Business Forms, who was fired after reporting safety concerns about the brakes on the truck he drove for the printing company.

David Moyal has felt the fallout, first-hand, of just how difficult it's been for printing companies to secure financing for their businesses. The president of Color-Web, a unit of 1800Postcards.com, contends the funding was pulled, not because his metro New York City-based printing operation was struggling, but more so due to the fact that the Great Recession crippled many printing concerns, making graphic arts industry loans overall a riskier investment.

Allied Bindery's primary goal is to produce a high-quality book, and a close second is to allow for flexibility. Being an early embracer of hot melt polyurethane (PUR) adhesive for spine gluing has helped it achieve both.

Rohrer Corp. (ranked No. 66 with $77.19 million in sales, according to the 2011 Printing Impressions 400) has announced the acquisition of Hogue Printing Solutions, based in Mesa, AZ. The acquisition expands Rohrer's presence in the package printing industry by geographically aligning a physical plant in combination with a dedicated Western sales force.

Why Equipment Lists Do Matter –Dana

Printers, it’s time to pay attention to the lowly equipment list. Admit that it’s much more than a matter-of-fact inventory of your hardware and software. Recognize it for what it is: a legitimate sales tool for key prospects.