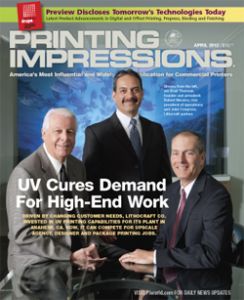 When the Indigo E-Print 1000 was introduced almost two decades ago as a new digital printing platform, the first question asked by most people was, “When is a larger version going to be available?” If for no other reason, it’s impossible not to see the introduction of the 29˝ HP Indigo 10000 digital press as the big news from HP’s recent pre-drupa briefing, even though by its count the company launched 10 “new” digital printing systems.

Colorfx has completed a deal to acquire Demco Printing, based in Boyden, IA, from Dethmers Manufacturing. Demco Printing offers digital, sheetfed and web printing, along with complete finishing services. With more than 30 years of experience, Demco will further expand the geographic reach and service capabilities of Colorfx and its sister company, Rock Communications.

Dodd Communications, a division of Nationwide Argosy Solutions, and Franklin Communications are combining their operations in Florida. The resulting company will be named Franklin Dodd Communications. “Combining Franklin and Dodd is a great opportunity to build on our individual strengths by offering our customers a broader platform of services,” said Richard Sierra, president of Dodd.

drupa 2012 : Something for Everyone

What does drupa mean? We’ve lined up an assortment of industry pundits and prognosticators to help you sort out the substance from the hype, and separate the pedestrian from the arcane. It’s tough to slap a label on a worldwide trade show.

Much Ado About Presses

At the official drupa 2012 International Media Conference, more than 100 media delegates eagerly awaited to hear about the latest drupa product launches that were going to be revealed during the three-day press briefing. Werner Matthias Dornscheidt, CEO and president of Messe Düsseldorf GmbH, reported that the show is sold out.

No to ‘Value-Added’ Plans –Farquharson/Tedesco

About a month ago, I gave a talk to a bunch of printers and finishers in Chicago. Sales compensation plans were on this group’s mind. In this column, I’d like to tackle one component: Payment on “value-added” services. Whenever this topic comes up with clients or industry friends, my vote is a resounding “nay.”

Quad/Graphics Inc. announced it will cease production at its Jonesboro, AR, facility in the fourth quarter of 2012 as it continues to consolidate work into its most efficient manufacturing platforms. The plant encompasses approximately 600,000 square feet and currently employs roughly 600 people.

Revving Up for the Big Show

The Center of the Universe...for Print –Michelson

From May 3-16, all planes, trains and automobiles will lead to Düsseldorf, Germany, for drupa 2012, the mega-exhibition that brings together graphic arts professionals from around the world and showcases cutting-edge innovations. Although Americans will represent a very small percentage of the expected 350,000 visitors converging on the fairgrounds’ 19 halls filled with 1,850 exhibitors, the new products and technology demonstrations at drupa provide a compass point for the technological direction that the U.S. industry will take for years to come.

Shortly after the deal closed, TC Transcontinental announced that two of the six Canadian facilities it recently acquired from Quad/Graphics would be closed and another folded into an existing plant. The measure is part of the company's reorganization and rationalization of assets, a move that will see about 500 employees impacted.

The Milhous brothers—distant cousins of Richard Milhous Nixon—began publishing a weekly shopper (Treasure Chest of Values) in 1967. Their Treasure Chest Advertising became the king of retail inserts, and at the time it was acquired by Big Flower in 1993, Treasure Chest's revenues had touched the $761 million mark.

Lithocraft’s philosophy has been to go with full-sized sheetfed presses to help differentiate itself from many local shops that had taken the half-size route. Three years ago, it became clear that continued success would depend on entering new markets. After researching UV for about a year, Lithocraft decided to start the vetting process for a UV press.