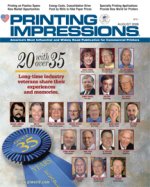 Another Name Change for Vertis

BALTIMORE—A Big Flower, by any other name, proved not to be as sweet as Vertis from an advertising standpoint. But upon further review, the national marketing specialist felt a new branding would be more appropriate. Thus, effective immediately, the company is now called Vertis Communications.The name change emphasizes Vertis’ communications services in the marketing, advertising…

Be a Good Data Steward

A number of high-profile data security breaches in recent years have been a strong reminder that responsible handling of data goes beyond compliance with existing laws. Data stewardship, says Ben Isaacson, privacy and compliance leader at information solutions firm Experian, headquartered in Costa Mesa, Calif., is more than just what you put on paper in your contracts and privacy policy. “It’s really how a company sets up a process by which it can manage data—and most of the time, what we’re talking about is personally identifiable information.” Data security and privacy issues can be broken into three main areas: data procurement, data usage and

BITS AND PIECES BRUCE DERON only wanted to recover some long-lost war medals he’d earned as an Air Force pilot during Vietnam. Thanks to Senator John McCain (R-AZ), Deron will be getting more recognition than he had expected. Deron, president of Waymart, PA-based SG Printing, had contacted McCain’s office inquiring about a way to replace his medals, which had been misplaced years ago during a move. McCain took a long look at Deron’s military record, verified the original citations and found there were other events where he should have been medaled for his actions, according to Deron’s son, Jason—the vice president of sales at

STAMFORD, CT—Cenveo has pulled off the biggest deal in the first year of Bob Burton’s administration there, acquiring Rx Label Technology from Pfingsten Partners and Hilco Equity Partners in an all-cash transaction. Terms of the deal were not disclosed. The company will operate under the Rx Technology name at its Joplin, MO, facility. Rx Technology, a $40 million annual performer, manufactures pressure-sensitive prescription labels for the U.S. retail pharmacy market. It is reportedly the only label converter with the capabilities to produce simplex, duplex (integrated and dual web) and thermal rolls. “This acquisition...brings Cenveo into the high growth, pharmaceutical label market and is expected to be accretive

Quark Out to Make Seven a Lucky Number NEW YORK CITY—Competition is said to be a good thing. To the extent that’s true, these are great days for users of page layout software. Quark Inc. clearly has been tested by Adobe Systems’ challenge to its once near monopolistic position in the graphic arts market. It is responding technologically with the release of QuarkXPress 7 and offering inducements for users to upgrade, thereby keeping them in the fold. Most of the enhancements are targeted to the design community, naturally, but the company insists it kept an eye toward print service providers (PSPs) during development

ESTIMATING AND PRICING — RECOGNIZING THE DIFFERENCE

ESTIMATING AND pricing are the two most indispensable areas of the printing sales process, according to Gary Cone, vice president of Seattle-based commercial printer Litho Craft Inc., and author of the NAPL book “Price Doesn’t Count.” He notes, however, that although printers sometimes use the terms interchangeably, they are definitely not the same thing—and it’s critical for managers and salespeople to understand the difference. “Estimating is a science—a mathematical calculation based on the job specifications and the variables and parameters of the production process,” he says. “It’s a repeatable process, yielding the same—or close to the same—results each time. “Pricing, on the other hand,

THE PHRASE “Great sales reps are born, not made,” is not true. Show me any individual who has achieved excellence in their professional endeavors, and I’ll show you a person who has worked relentlessly to develop their skill sets for achievement, while also accessing supporting resources. However, what often isn’t seen on the surface are the systemic, contributing factors to that individual’s development and performance achievements. These usually include a coach or mentor, a wide array of support personnel, a supportive culture that includes relentless education and training, and systematic (including constructive and positive) feedback. Turning to the future, organizations should be developing

A TRADITION of providing quality services and a bloodline in the graphic arts industry have allowed Niles, IL-based JohnsByrne Co. to continually expand and move into new business areas. Founded in 1959 by John B. Gustafson, along with his parents John E. and Marie Byrne Gustafson, the company got its start as a shop on Printer’s Row in Chicago. The printer’s moniker was created by taking two Johns—the first name of both father and son—combined with Marie’s maiden name, Byrne. So the company known as JohnsByrne was born, along with a mission to provide superior printing solutions and outstanding customer service. That focus is carried

IT’S STRIKING for so many industry trends to be encapsulated in a single company, especially a mid-size printer with just over 50 employees. Denver-based Lange Graphics continues to make major investments in sheetfed offset capabilities while expanding its digital printing business. Both production platforms have the capability to support the firm’s diversification into printing on plastic, static cling and removable vinyl materials. The shop also is in the process of rolling out a Web-to-print solution. Lange Graphics originally established a separate business—Digi Colorado—as a vehicle for its move into digital printing, but is now offering offset and digital printing services in an integrated approach. Its

Commercial printers’ interest in “value-added” services that create new revenue streams has stimulated the consideration of mailing and fulfillment equipment. It’s no wonder: direct mail is growing at a time when uses of other forms of mail have been declining. In fact, since the first quarter of the U.S. Postal Service’s 2004 fiscal year, annual volume is up by 11 million pieces. It’s interesting to see how mailing equipment fits into the investment plans of Printing Impressions readers, based on a survey done in March in conjunction with PrintForecast.com. About one in five printers responded that they are interested in this equipment. For plants doing

FOR MANY commercial printers, printing has become just one part of the revenue stream. Mailing and fulfillment services are making up an increasing portion of a printer’s offerings to clients. Because of this fact, many printers are in need of innovative solutions that will allow them to grow in this new area. The following article discusses the various factors printers should consider when entering mail fulfillment. For printers, the main attraction of offering mailing services in addition to standard services is undoubtedly the prospect of increasing profit margins and creating a new and potentially lucrative revenue stream. These services, in turn, provide your customers

MOST OF the printers I have visited over the past several years are already in the fulfillment business with one or more applications. In fact, several applications reviewed were very sophisticated, consisting of both static and dynamic content and requiring considerable data manipulation plus mastery of several shipping methods. Printing companies are very entrepreneurial in finding ways to satisfy customers’ needs with their existing resources. In addition, printers have taken the leadership in the Web-to-print industry, which has provided them experience in establishing shopping carts for their clients. So, getting started in fulfillment may not be an entirely correct title for this

RECENT U.S. Postal Service (USPS) announcements suggest trends that could be advantageous to corporate mailers seeking economies of scale via their full-service print/mailing providers. The increasing use of the Internet as a tool to reduce the mail distribution time, postal discounts to drive mail design that will run more efficiently through postal sorting equipment, the broader interest in Intelligent mail by corporate users, as well as more innovative partnerships with the larger scale mailers to save money and improve overall service, are four key mail trend topics. The enhanced use of the Internet by mailers and the USPS is a clear trend in two specific

Nuremberg, Germany—July 28,2006—A group of more than 50 MAN Roland-equipped printers from North America helped make World Cup and graphic arts history last month, witnessing live the pivotal match between the U.S. and Ghana here and reviewing several facilities throughout Germany where MAN Roland presses are scoring goals. “We called this event ‘Print and Play’ to emphasize how our technology provides extraordinary rewards to printers who take advantage of our presses’ unique capabilities,” says Yves Rogivue, who lead the tour as CEO of MAN Roland Inc. “Everyone had a great time cheering on these world-class athletes, then seeing first-hand how MAN Roland helps our customers

A New PRIMIR Study Focuses On Print As One Choice Among Others In A Growing Media Pie For decades, print has been the media of choice by media buyers…in fact, they are often called “print buyers” because of the volume of print orders they make. It’s not to say that print is in disfavor today, but there are far more options available to the media buyer coupled with the fact that many are younger and have grown up with computers and electronic alternatives to print. The concern becomes that these younger buyers have a bias to the electronic alternatives, but why? The primary reason is

PRICE INCREASES, or attempts to implement them, are what’s on tap in the paper sector. Along with raising quoted prices per ton, paper companies could feel renewed pressure to pass along higher energy costs through surcharges if oil prices do climb toward the $100/barrel mark predicted in the most bearish outlook. The Lane Press, in Burlington, VT, put an interesting spin on that latter market development. Under the “Did you know?” heading in its last two “Paper Prophet” newsletters, the printer pointed out to customers that “Lane Press’ close proximity to Northeast paper mills slashes transportation costs and reduces fuel surcharges.” There hasn’t been

Browsing hasn’t become a Web-only activity quite yet. Shoppers looking to make a major purchase still tend to visit multiple stores and/or revisit the same store before making a buying decision. Furniture shoppers are particularly apt to dither in light of the wide range of choices—styles, colors, fabrics, etc.—and often conflicting tastes. It’s easy for buyers to get confused about what they saw where and forget the finer points of an individual piece. [ Program Objectives ] The management of American Signature Furniture wanted a way to keep visits to its stores top of mind for browsers and to encourage them to come back. The company

PART OF the beauty surrounding printing on plastics is that the potential for applications is limited only by the imagination of designers. And, judging by the creativity of some gizmos and gadgets printed on plastic, that doesn’t appear to be an issue. Even with limitless possibilities, this discipline comes with caveats. The substrates cost more than most paper stocks. The adhesion can be difficult. Some substrates can be high maintenance. Not every great concept will fly. And neophytes need to educate themselves thoroughly on the nuances of plastics printing. Color Ink, based in Sussex, WI, has worked in the plastics space since 2001, with